Russia agrees to landmark purchase of two warships from France | Europe| News and current affairs from around the continent | DW | 24.12.2010

Russia agrees to landmark purchase of two warships from France

France and Russia have reached a landmark agreement to jointly build two Mistral-class warships for the Russian military, despite warnings from some NATO countries that the sale could undermine the alliance's allies. 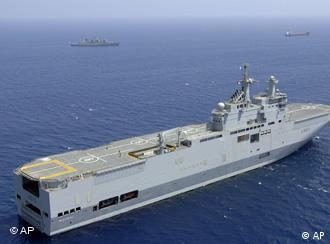 One Mistral-class ship can carry 16 helicopters

Russia has agreed to contract a French-led consortium for the construction of two warships, the Russian and French governments announced on Friday.

The deal would be the first sale of military technology to Russia from any NATO member state. The United States and other NATO counties had expressed concern about transferring modern Western weaponry to Russia for fear of it being used against NATO allies, especially since Russia's brief war with Georgia in 2008. 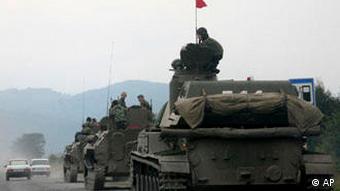 Russia has been in discussions with France on buying the Mistral technology for more than a year. Much of Russia's armed forces are burdened with Soviet-era technology, and military leaders are keen to modernize it.

One Mistral-class ship includes a 69-bed hospital and can carry up to 16 helicopters, four landing craft and a 750-strong landing force.

The office of French President Nicolas Sarkozy said the contract would create 1,000 jobs in French shipyards over four years, and that the deal leaves open the construction of two more ships at a later date.

Russian Prime Minister Vladimir Putin had previously said that the price of the warships and the possibility to build more on Russian soil would be key criteria in Moscow's decision.

An increase in incidents where Russian warplanes have infiltrated the sovereign airspace of EU and NATO countries is causing concern among European defense chiefs. Experts believe the Russian bear is flexing its muscles. (04.04.2010)

Russia used the stage at the Munich Security Conference to lash out at NATO's eastward expansion, but the Western alliance was quick to dismiss Moscow's position as not being sufficiently anchored in the real world. (07.02.2010)