Running Through Life the Parkour Way

A small but highly dedicated group of athletes is working hard to promote a form of urban activity known simply as "Parkour." The main obstacle in their path is to communicate the true nature of the game. 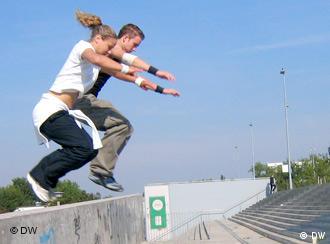 Andreas Kalteis, a 19-year-old practitioner of Parkour, is poised on a concrete slab like a cat waiting to spring on an unsuspecting bird. He takes several deep breaths. Then, swinging his arms for momentum, he launches himself into the air, landing perhaps 15 feet away on the hard, concrete floor. "Wow!" the Austrian athlete exclaims. "If you know about Parkour, then you'd look at that and say, 'Mary Joseph!'" 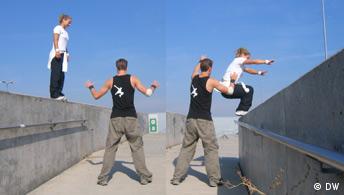 To an outsider, the urban extreme sport known as Parkour, or free running, may appear somewhat odd. Comprised of precision leaps across significant gaps, unlikely ascents of city structures and gymnastic maneuvers to overcome urban obstacles, it defies simple categorization. Somewhere between acrobatics, martial arts and obstacle course, Parkour is on the rise, two of its devotees told DW-WORLD.

While today Parkour is largely the domain of stunt professionals, Kalteis, together with co-Parkourist Sandra Hess and her brother Marcus Hess, want to bring their discipline to the masses. They are planning a tour of Germany next summer to showcase the "esthetic sport" in half a dozen major German cities.

The tour is aimed at raising awareness as well as a proper understanding of the sport and its practitioners. Until now, Parkour has received some bad reviews in the press and been subject to misinterpretation from the general public. 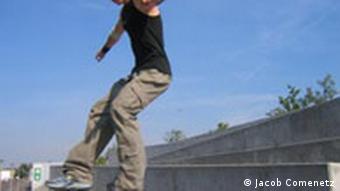 "There are quite a lot of misunderstandings about what Parkour is and what it isn't, unfortunately," said Mr. Kalteis. Part of the confusion can be traced to a television trailer aired by British broadcaster, the BBC. While introducing many people to the sport and its founder, Frenchman David Belle, it also gave many the wrong impression. The brief spot featured Belle leaping across roofs like Spider-Man.

"TV likes to have it on roofs, but that's just television," explained Kalteis. "People believe it's the sport of roof running, but it's not true. You can do it wherever you are. If you have an obstacle, then you have Parkour," he said.

Learning Parkour, one leap at a time

The German tour will also allow those curious about Parkour to receive introductory training, a key aspect of the sport to avoid injuries, Mr. Hess said. What often looks like a highly dangerous pastime is not necessarily as perilous as it seems. 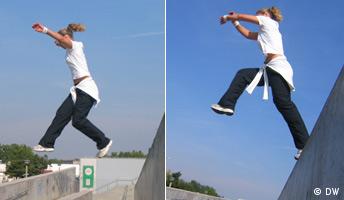 "It's not more dangerous than other sports--if you prepare yourself and grow with your abilities," he said. "It's different than other sports because you work your way up. You build up your basis step by step."

To promote a proper notion of the their concept of Parkour, Marcus and Sandra Hess, together with David Belle, founded the Parkour Worldwide Association (PAWA) and the Web site, currently only in German, www.pawa.de. The site includes videos that allow surfers to see for themselves what the sport looks like.

Not just a sport

Parkour enthusiasts Hess and Kalteis insist that Parkour is more than a sport. What sets it apart is its free, unregulated nature.

"Parkour is to clear all obstacles in your path in a fluid and effective manner," Kalteis said. "As a philosophy, it has an effect on your whole life, your whole attitude." 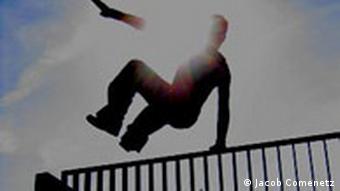 Much like a martial art, Parkour transcends the divide between mind and body, and demands mental as well as physical discipline from its followers. There is a code of conduct which prohibits the damaging of property for reasons of efficiency. Proper behavior, including not trespassing, is very important. 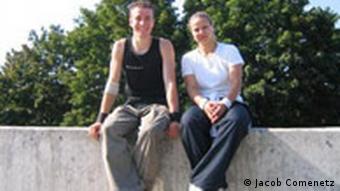 The Hess siblings and Kalteis are hopeful that the new organization PAWA, together with their Germany tour, will show a broader audience what Parkour is all about and dispel some misconceptions.

"PAWA is here to get the right information to people--it's not about vandals and damaging stuff," Mr. Kalteis said. "You have to interact with the environment without changing it."

"We're not criminals--we're artists!" he said.

Twenty years ago, an unknown red-head from Germany became the youngest player ever to win Wimbledon. Boris Becker inspired an entire generation of German tennis players, so why does the future of the sport look so dim? (June 29, 2005)

A record-breaking sports event ends in Berlin Friday as more than 100,000 gymnasts will bid farewell to the 40th German Gymnastics Festival. In Germany, gymnastics has a long tradition dating back almost 200 years. (May 20, 2005)

More than 160 athletes from the former East Germany are demanding compensation for the effects of performance-enhancing drugs they were made to take, often as children. The drugs have scarred or even ruined their lives. (June 29, 2005)