EU leaders meeting in Brussels are taking the Polish premier to task over a court ruling undermining the primacy of EU law in his country. The dispute is threatening to throw the bloc into crisis. 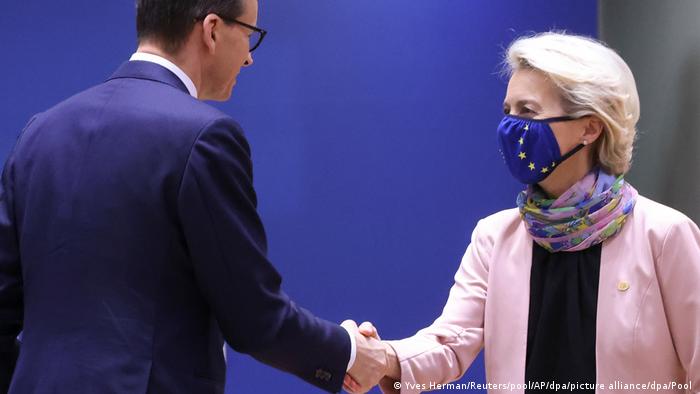 A summit of European Union leaders on Thursday that was originally intended to discuss dramatically rising energy prices is being overshadowed by an increasingly bitter feud with Poland over the rule of law.

Polish Prime Minister Mateusz Morawiecki is facing pressure from his EU counterparts to bring his country in line with the principles of the bloc it signed up to in 2004.

The ruling brings to a head differences between Poland and the bloc over several principles of democracy, ranging from judicial independence, freedom of media opinion to rights of women, migrants and LGBTQ people.

How do young people in Poland feel about the EU?

What have EU leaders said?

German Chancellor Angela Merkel appealed for compromise upon arriving at the summit in Brussels. "The rule of law is a central pillar of the European Union," Merkel said. "On the other hand, we must find ways and possibilities to come together again."

Merkel cautioned against opting for the legal route when challenges presented themselves saying, "a cascade of legal disputes at the European Court of Justice still isn't a solution to the question of how the rule of law can work in practice."

French President Emmanuel Macron's office meanwhile said he had communicated his concerns with Morawiecki and urged him to discuss the matter with the European Commission in order to find a compatible solution.

Its understood a meeting between the two leaders took place at Brussels airport ahead of the summit.

Dutch Prime Minister Mark Rutte took a harder stance and said EU leaders must demand Poland safeguard its judicial independence. "We have to be tough, but the question is how do we get there," Rutte said upon arriving at the summit.

"The independence of the Polish judiciary is the key issue we have to discuss. It is very difficult to see how a big new fund of money could be made available to Poland when this is not settled," Rutte stressed.

Belgium's Prime Minister Alexander De Croo echoed Rutte's sentiments and said that EU membership meant abiding by its rules. "You can't belong to a club and say the rules don't apply to me," De Croo said.

While Luxembourg's Prime Minister Xavier Bettel said it would be a shame if it was only the prospect of money that compelled Warsaw to act.

Morawiecki said Poland would try and resolve the disputes and was ready for dialogue, but would not respond to blackmail.

"We will not act under the pressure of blackmail, we are ready for dialogue, we do not agree to the ever-expanding competences (of EU institutions), but we will of course talk about how to resolve the current disputes in dialogue," Morawiecki said.

Hungary has come out in support of Poland with the country's Prime Minister Viktor Orban saying: "There is a witch hunt going on against Poland in Europe."

Polish PM to EU Parliament: 'I will not have EU politicians blackmail Poland'

Piotr Buras of the European Council on Foreign Relations also fears that Poland's behavior could change the nature of the EU and undermine its foundations.

This is a "test case, whether a legal system in which the independence of the judiciary is not given can be tolerated in the EU," Buras told DW. Europe must act decisively "before it is too late".

Warsaw could face financial penalties for its actions, with France and the Netherlands particularly objecting to EU money going to governments that undercut democratic principles and human rights, such as those in Hungary and Poland.

The European Commission has already temporarily stopped Warsaw from taking its share of €57 billion ($66 billion) in emergency funds aimed at helping the economies of EU member states to recover from the COVID pandemic. The European Parliament is also to vote later on Thursday on whether to call on the bloc to cut its handouts for Poland over the rights violations.

Since joining the bloc, Poland has enjoyed significant benefits from EU funding, and public support for remaining a member is high, despite the moves by the government that would seem to suggest a potential exit.

Morawiecki has dismissed suggestions of a "Polexit."

Merkel suggested a measured response to spiralling costs. "I think that we should react calmly; we in Germany will do so in any case," Germany's outgoing leader said.

Belgium's prime minister said that the country was stepping in to help households, but emphasized the need for sustainable solutions. "In the long term, there is only one solution, invest more in renewable energy so we are less vulnerable to price fluctuations for fossil fuels," De Croo said.

Options on the table includelowering taxes, delivering direct financial aid to households most at risk and giving state aid to small businesses.

One proposal regards joint gas storage and procurement. France is also calling for a review of the way electricity is priced in the bloc, while touting nuclear power as a climate-friendly energy option.

The two days of talks will also likely include discussions on the COVID-19 pandemic that is still causing surges in infections in several member states, while vaccination rates are still extremely low in some countries.