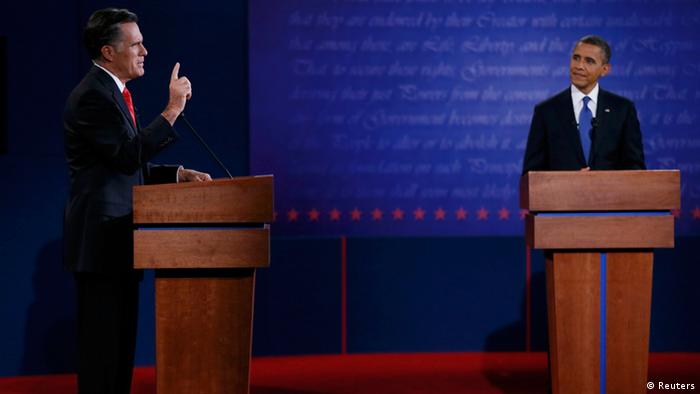 After months of campaigning, the two candidates went head-to-head at the University of Denver on Wednesday night (US time) in the first of three televised debates in the run-up to the November 6 election.

The opponents didn't throw verbal punches at each other, instead choosing to focus on facts and figures in an attempt to win over swinging voters, with issues such as tax, healthcare and the role of government at the forefront.

Romney, on the offensive, opened the debate by highlighting the country's weak economic growth and 8.1 percent unemployment figure, which has left Obama exposed as he attempts to win a second stint in the White House.

"There's no question in my mind that if the president were to be re-elected you'll continue to see a middle-class squeeze with incomes going down and prices going up. I'll get incomes up again," the Republican candidate said.

"Governor Romney has a perspective that says if we cut taxes skewed toward the wealthy and cut back regulations, we'll be better off," Obama responded. "I have a different view."

The president put Romney on the defensive with his plan to overhaul the country's tax system, adding that Romney hadn't been clear about which tax system loopholes he promised to close.

Despite often criticizing Obama's regulatory policies, Romney stressed that some "regulation is essential."

"You can't have a free market work if you don't have regulation," he said. "You couldn't have people opening up the banks in their garage and making loans."

But Romney blamed his opponent of driving through "excessive regulation" that shackled US industry and "stunted growth in key economic areas."

"What's happened with some of the legislation that's been passed during the president's term, you've seen regulation become excessive and it's hurt the economy," Romney said during the 90-minute televised debate.

Following the telecast, some critics were quick to fault Obama's performance, saying Romney sounded sharper than the president, who at times gave long-winded answers.

Romney desperately needed a victory at the debate in a bid to help him get his campaign back on track after a few troubled weeks.

A tape released month showed Romney, caught by a hidden video-camera at a private fundraiser in May, saying 47 percent of American voters paid no taxes, were dependent on the government and unlikely to support him.

Obama, who holds a marginal edge in the national polls, is leading Romney in some key swing states where the election will be decided.

But, Romney dominated much of the debate, causing many political commentators to declare him the winner.