Rome's Trevi Fountain made over $1million 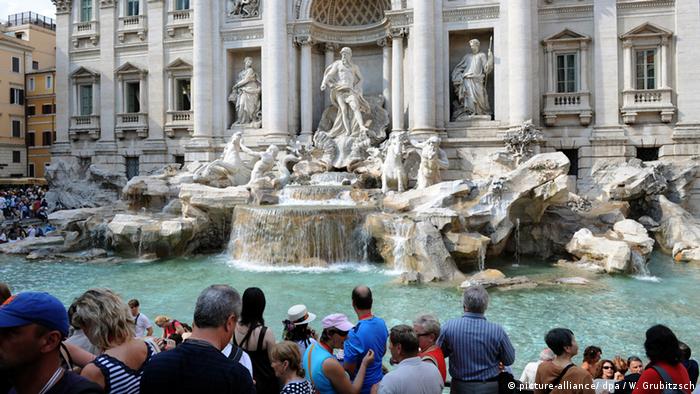 The money left by tourists paid for a supermarket offering free food to poor families, soup kitchens, shelters for migrants and other charitable causes, Caritas said.

Tradition dictates that visitors toss coins into the spectacular 18th-century Baroque fountain if they want to return to the Eternal City.

The collected amount was up by more than 100,000 euros compared to 2013, the last year figures were published. The monument was largely covered up from 2014 to 2015, during a restoration funded by the Fendi fashion house.

But coins were not the only items deposited in the fountain, whose facade features Greek mythological figures set against a 26-metre-high palace. Caritas staff also found religious images of Pope Francis, the Virgin Mary, Italian saint Padre Pio, as well as bracelets, sunglasses, locks and a couple of dentures in its basin, La Repubblica reported.

Every year, millions of tourists throw coins into Rome's Trevi Fountain. Legend says that in doing so, you ensure a return to the eternal city. But what actually happens to all the money thrown into the waters? (24.06.2016)

At the nearly 300-year-old monument in Rome, visited by millions of tourists every year, tradition has it visitors can ensure eternal love by drinking its waters - not by swimming in them. (26.07.2016)

Following 16 months of restoration, water once again flows through the Baroque fountain in the Italian capital. The Trevi Fountain is a famous Rome landmark that draws millions of tourists from around the world. (04.11.2015)

Trip through the countries neighboring Ukraine — a travel diary 25.09.2022

How has the war in Ukraine affected tourism in neighboring countries? DW's Shabnam Surita and Laila Abdalla will spend two weeks in Central and Eastern Europe to find out. Follow their daily travel updates here.