Rome's mayor to face prosecutors over alleged abuses of power

Italian prosecutors have summoned Virginia Raggi, the embattled mayor of Rome, over a questionable appointment. The euroskeptic politician said she has "complete faith" in the judiciary. 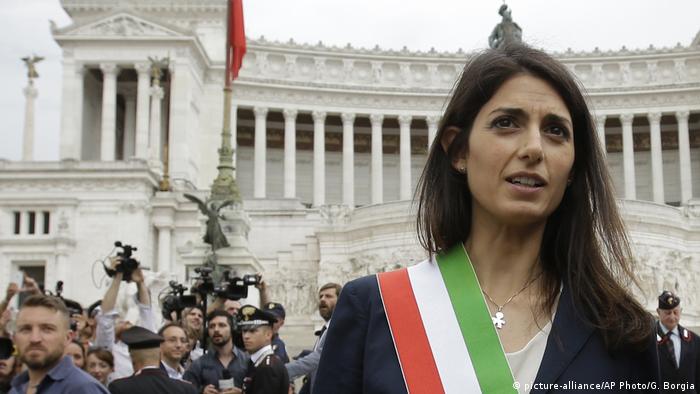 Rome Mayor Virginia Raggi on Tuesday said prosecutors summoned her for questioning as part of a corruption probe into one of her confidants.

Is Italy's 5-Star Movement the next blow to the establishment?

Founded by comedian Beppe Grillo, the Italian populist M5S sees itself as the solution to problems caused by a self-interested elite. But what do they offer? And will it lead them to power?

Italy's financial police have detained several businessmen over a scheme to win public contracts and pocket the funds. The detentions mark the latest blow to the troubled administration of Rome mayor Virginia Raggi. (19.12.2016)

Local media reported that Raggi, a euroskeptic of Italy's leftist 5-Star Movement (M5S), is facing questioning for alleged abuses of power and is scheduled to testify before February.

In a statement published on Facebook, she said her summoning concerned the appointment of Renato Marra as head of tourism for the city.

Marra is the brother of Raffaele Marra, who police arrested in December on suspicion of taking a bribe from a real estate developer in 2013 while serving as the head of housing policy under ex-Mayor Gianni Alemanno.

Italian prosecutors investigated Alemanno for suspected involvement in a political scandal that caused the local government to collapse in 2014.

The scandal surrounded the misappropriation of public funds by members of the mafia in Rome and the region of Lazio.

"I am not worried. I have complete faith in the judiciary as always," Raggi said on her Facebook account.

The summoning has cast doubt on M5S leader Beppe Grillo's statement that the leftist party has remained untainted by unethical political maneuvers.

In December, Grillo said in a blog post that the party must "change gears" and "fix the errors and leave no room for doubt."

"Mistakes were made, and Virginia Raggi has admitted them. She trusted the least trustworthy people in the world," he added.