Parts of the Romanian government's cost-cutting plans have been rejected as unconstitutional by the country's highest court. Prime Minister Boc says he is now working on "alternative measures", with the IMF and the EU. 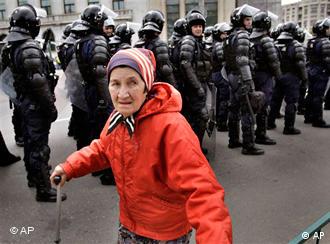 Pensioners may not be hit by the unpopular cutbacks after all

Romanian Prime Minister Emil Boc has suffered another setback as he tries to keep control of the country's growing debts. After the country's Constitutional Court rejected parts of the his proposed austerity package, in a decision which cannot be appealed, the already embattled prime minister said he would go back to the drawing board.

"The government has a series of alternative measures to reduce the public deficit, which are negotiated with our partners from the European Commission, the International Monetary Fund and the World Bank," Boc said in a brief statement.

Romania needs to keep its budget deficit at 6.8 per cent of GDP in order to qualify for a two billion euro ($2.45 billion) tranche of monetary aid from the International Monetary Fund and the European Union. These organizations promised Romania a total of 20 billion euros in aid, provided the country starts to keep its debts down.

"Our objective is to maintain the agreement with the IMF and to respect the deadlines the Fund would set up," Boc said.

The prime minister added that the new measures would be made public at the end of the negotiations.

In order to meet the international targets, Boc's government had introduced unpopular plans to cut public sector wages by 25 per cent, and to reduce pension payments by 15 per cent.

Romania's Constitutional Court has ruled that both of these cutbacks cannot be reconciled with the country's constitution.

"There were five challenges brought to the bills," judge Ascinte Gaspar told the news agency Reuters by phone. "We accepted two."

The court said it will release the full reasoning behind its decision by Monday evening.

One possible alternative to these cutbacks would be to raise the country's sales and income taxes instead, an idea that deputy Prime Minister Bela Marko described as one possible solution to recoup the missing funds.

Prime Minister Emil Boc's fragile government only narrowly survived a no-confidence vote over the cutbacks earlier this month, with the cuts unpopular amongst the public as well.

Romania's public sector employs roughly one third of total employees, and some economists say it costs the country twice as much as it should.

Angry Romanians call on leaders to step down

Tens of thousands of Romanians have marched in the streets of the country's capital, Bucharest, to protest against austerity measures. Protestors have called for the government to step down. (19.05.2010)

As the situation in Greece continues to intensify, fears are increasing that the debt crisis will spread throughout Europe. DW takes a look at some of the European bankruptcy candidates in line behind Athens. (28.04.2010)

Medical students in Bucharest are helping to reduce tuberculosis in Romania by dispelling ignorance of the disease in rural areas. (07.04.2010)