After a vote of no confidence toppled the center-right coalition government in Bucharest, President Basescu has designated Victor Ponta as his new prime minister. He leads the new left-led Social Liberal Union. 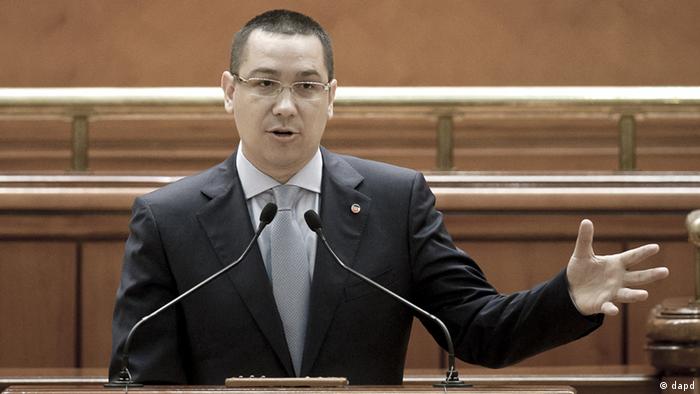 The decision fell just hours after the vote of no confidence submitted by the opposition.

"There's no reason to panic," President Traian Basescu said after the collapse of Mihai Razvan Ungureanu's center-right government. "This is all happening in a democratic framework and is under control, as far as the security of our state is concerned." He also said Romania's finance ministry has "substantial reserves that can cope with any event."

Basescu's decision took his supporters by surprise: just last year, the president declared he would never name the head of the Social Democrats Prime Minister. But Romania's president defended his choice as "completely legitimate" because Ponta is the candidate favored by a new parliamentary majority.

Bucharest saw spectacular political change within less than ten hours on April 27. The opposition alliance USL had put relentless pressure on Bucharest: They were highly critical of the government's privatisation plans of state assets and attacked the allocation of public funds to local communities whose mayors are members of the ruling coalition. Two very different parties with very different platforms joined forces last year to form the opposition alliance: the Social Democrats (PSD) and the National-Liberals (PNL).

In January, thousands of angry Romanians took to the streets in major cities across the nation in protests against the government and President Basescu, demonstrating against planned austerity measures that foresee a 25 percent cut of all public sector wages. The fact that the president consistently refused to enter into a dialogue with the opposition, which favored less drastic austerity measures, only served to fuel the people's anger. In early 2012, opinion polls showed fewer than 10 percent of Romania's citizens trusted the president and his center-right government. 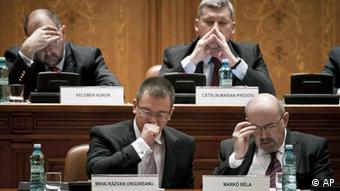 Prime Minister Ungureanu took over from his predecessor Emil Boc of the Liberal Democrats (PDL) in February, planning to continue the unpopular reforms demanded by the International Monetary Fund (IMF). At the same time, Ungureanu declared plans to raise wages in the public sector to pre-crisis levels. Despite his optimistic announcements, Romanians lost confidence.:According to opinion polls, more than 50 percent of the population planned to vote for the opposition. Under these difficult circumstances, the ruling party lost ten members of parliament and dozens of mayors and local politicians within weeks - they defected to the opposition.

"From a political point of view, the vote of no confidence confirms a voter decision that was foreseeable," Vasile Dincu, head of the Insitute for Social Research (IHRES) in Bucharest told DW. He also blamed the collapse of the government on the fact that premier Ungureanu hadn't managed to prove his political independence. "Like his predecessor Emil Boc, he was regarded as the president's willing executor," Dincu said.

In light of these developments, expectations of a new government under opposition leader Ponta are particularly high. At the same time, leading members of the opposition appear to be aware of the fact that they can't suddenly drop austerity measures agreed with the IMF and the EU.

Ahead of the no confidence vote in parliament, Victor Ponta pledged the opposition would continue to work with the IMF. But he added plans to re-work some of the bailout package's provisions by lowering the sales tax (VAT) Romania raised in 2012 . "These measures weren't only necessary in Romania, but in all of Europe," Ponta said, but cautioned that his country's economy, among the weakest in the EU, must also be supported.

Time is too short for VAT to be lowered ahead of the parliamentary polls in November, however. Even the new government will be forced to follow through with unpopular measures, according to political scientist Vladimir Tismaneanu.

In any case, Tismaneanu says the political skirmish in Bucharest is about much more than the economy. The expert trusts the new Social Democratic premier to control public spending, but warns the opposition has over the past weeks taken on an "isolationist and very nationalist rhetoric." According to Tismaneanu, the opposition might lead Romania in a direction not beneficial to the "nature of modern democracy."

Ahead of the no confidence vote, the opposition repeatedly announced it would initiate a procedure to suspend the president should the alliance come to power. But the issue has not come up again since President Basescu nominated Victor Ponta as prime minister - quite possibly an indicator of a peaceful cohabitation between the president and the opposition in Bucharest in the future.

Romania's center-right government has fallen in a no-confidence vote submitted by leftist parties. Leftist opposition leader Victor Ponta has been picked by President Traian Basescu to form a new cabinet . (27.04.2012)

Romania may be hoping for a deal over Serbia

Romania has refused to back Serbia's EU candidacy at a European foreign ministers' meeting and wants guarantees for ethnic Romanians living in Serbia. This may be part of a strategy, although it's not clear which one. (29.02.2012)