The court has upheld Ion Ficior's sentence of 20 years in jail over the deaths of 103 prisoners under his watch. He rejected the allegations of prisoner abuse and has argued he was following orders. 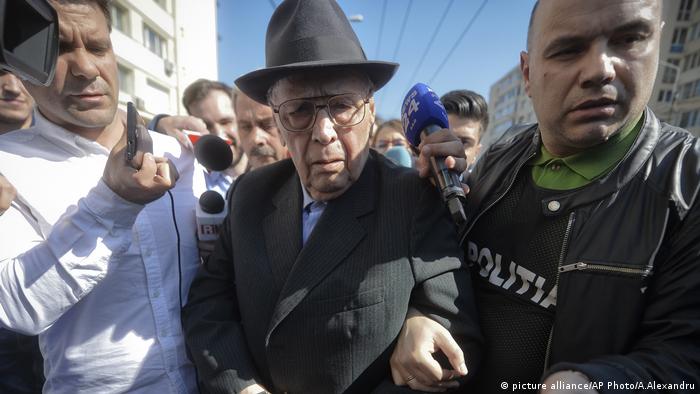 Romania's highest court rejected an appeal from a Soviet-era prison guard on Wednesday, upholding his conviction over the deaths of 103 political prisoners. Ion Ficior, 88, has been sentenced to 20 years in prison for crimes against humanity.

Ficior was the commander of the Periprava labor camp from 1958 to 1963. Under his command, detainees were subjected to routine beatings, overwork, had food and medicine withheld and were kept in unheated cells in a region that can get below freezing temperatures in winter.

"He totally deserves this punishment. He was left alone for too long. He was a cruel man," a former prisoner and witness in the case, Ion Radu, told Romanian broadcaster Digi24. Radu was at the Periprava camp for 12 years after he was convicted of belonging to an anti-communist organization.

Even after his March 2016 conviction, Ficior consistently denied any wrongdoing, and told the court he was merely following orders.

The High Court of Cassation and Justice also upheld a decision awarding damages to eight former political prisoners and their relatives. Ficior, as well as Romania's Interior Ministry, Finance Ministry and National Penitentiary Administration will be forced to pay out 310,000 euros ($335,000).

Romania has been slower than some former Soviet nations to come to grips with its past, 25 years after the end of communism. Until 2015, no former prison camp leaders had been prosecuted for the rampant abuse that took place under the rule of dictator Nicolae Ceausescu and his predecessor. Two years ago, Alexandru Visinescu was finally given a 20 year jail term over his rule of Ramnicu Sarat prison from 1956 to 1963. A third suspect, Marian Petrescu, is currently on trial over similar charges.

Some 600,000 people were reportedly imprisoned in Romania on political grounds under its staunchly Stalinist Cold War government.

Romania: The Shadow of the Past

Romania: The Shadow of the Past

Romania's government has survived a no-confidence motion sparked by last week’s controversial corruption decree. Protesters, however, have continued to call for the government’s resignation. (08.02.2017)

Romania is facing its biggest wave of anti-government protests since 1989, while Bulgaria heads into its third parliamentary vote in four years. The two states joined the EU 10 years ago, but remain beset by corruption. (02.02.2017)

At least 200,000 people have taken to the streets of Romania's capital and other towns to protest against the government for decriminalizing some official misconduct. It was the largest mobilisation since 1989. (02.02.2017)