Lewis Hamilton won the Bahrain Grand Prix, but it's a race that will be remembered for a huge crash involving Romain Grosjean. The impact split his car in half and produced a fireball, but the Frenchman somehow survived. 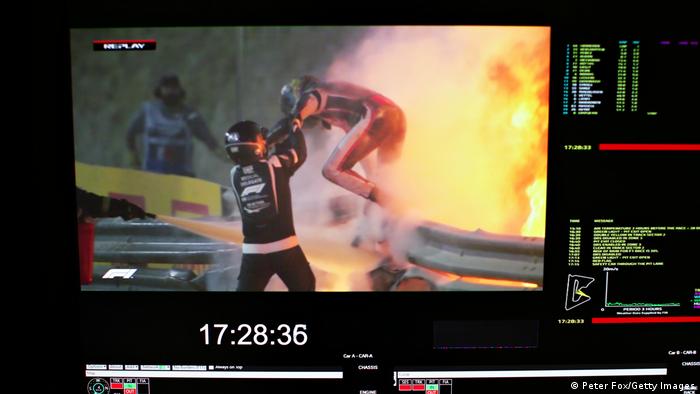 Romain Grosjean's desperate leap from the wreckage of his burning car will be the enduring image of a Bahrain Grand Prix that will remembered only for the Frenchman's miraculous escape.

Just clear of turn two on the opening lap, Grosjean lost control of his Haas and rammed into the barriers at around 250 kilometers/hour (155 miles/hour), with the impact slicing his car in half, producing an instant fireball and a plume of dense black smoke.

It wasn't immediately clear whether Grosjean had got out, but after a few agonizing moments pictures showed him jumping out of the wreckage and into the arms of the nearby staff. He was taken to hospital, where he will stay overnight as a precaution even though his injuries were limited to broken ribs and some minor burns.

"It's a miracle that he's alive," said 1996 world champion Damon Hill, who was Ayrton Senna's teammate at the 1994 San Marino Grand Prix where the Brazilian was killed. 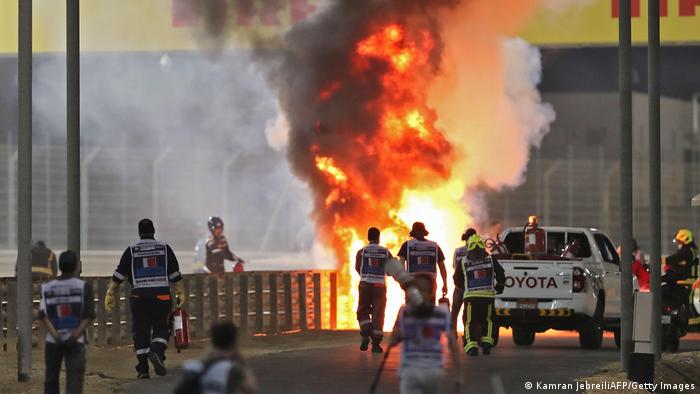 Medical car driver Alan van der Merwe was on the scene within seconds as he followed the field after the start of the race, and along with chief medical officer Dr. Ian Roberts they battled the blaze to save Grosjean's life.

"It was a big surprise for us as well, we've never seen that much fire in 12 years," said Van der Merwe.

"Romain started to get out of the car himself which was pretty amazing after an accident like that. It was a relief to see he was OK. It just goes to show all the systems we've developed worked hand in hand — the halos [safety device], the barriers, the seat belts, everything all worked as it should. Without just one of those things, it could have been a very different outcome."

'So grateful the halo worked'

The race was won by Lewis Hamilton for a record-extending 95th career victory, but the result was merely a footnote as Hamilton praised the halo, a protective ring above the drivers' head which the champion believes saved Grosjean's life.

"[The Grosjean incident] was such a shocking image to see," said the seven-time champion. "When we get in the car we know we are taking risks. I’m so grateful the halo worked."

The halo was introduced following the death of French driver Jules Bianchi after he sustained massive head trauma on a rain-soaked track at the Japan Grand Prix six years ago and went headfirst into a trackside crane. Two years ago Charles Leclerc, Bianchi's close friend, was likely saved serious injury or death by the halo when another car landed on top of his at the Belgian Grand Prix.

Lap 57/57 — LEWIS HAMILTON WINS THE BAHRAIN GRAND PRIX! It's yet another win for the champion, who wins with the safety car on the track and Perez's engine on fire. A fitting end to a race that will remembered not for Hamilton's victory but the horrific crash from which Romain Grosjean thankfully walked away from.

Lap 50/57 — Verstappen grabs another fastest lap and now we may see Hamilton pit to have a couple of late bites at the extra point himself.

Lap 44/57 — Bottas takes Ocon on the inside to seize ninth place. A small consolation for another race to forget for Hamilton's understudy at Mercedes.

Lap 36/57 — Verstappen's pit stop is followed closely by Hamilton. Both are on the hard tire now, and that should see them through to the end. Hamilton rejoins in first, narrowly ahead of Perez.

Lap 30/57 — Sainz makes a nice maneuver on Ocon to take sixth and Sainz is right behind his young McLaren teammate Norris now. "Lewis is using a lot more of the track limits at turn 4," Verstappen is told.

Lap 22/57 — Albon makes a smooth move on Leclerc with DRS to seize fifth place . Meanwhile, it's a new fastest lap for Verstappen, who is a second faster than Hamilton at the moment.

Lap 15/57 — "My car is jumping around like a kangaroo, I swear," Verstappen yelps down the Red Bull team radio.

Lap 10/57 — And after almost two hours, we've finally had a lap of racing. Hamilton leads from Verstappen, Perez is third.

Lap 3/57 — After an hour and a half, the Bahrain gets underway again. Hamilton keeps his lead and Bottas, who had restarted the race in fourth, passes Albon to regain a place. But the safety car is out after Stroll's car flips and that's him out the race. Thankfully not anywhere near as serious as Grosjean's crash.

Lap 1/57 — HUGE CRASH The red flag comes out immediately because Romain Grosjean has suffered a horrific crash on the second corner, slamming into the barriers at around 250 kilometers/hour with his car immediately engulfed in flames. Thankfully, Grosjean somehow walks away, albeit slowly and with the help of medical staff who are very quickly on the scene. Grosjean is taken straight into the medical vehicle and will be examined. A shocking moment and the race will be restarted later.

Update — Grosjean has suffered suspected broken ribs and burns to his wrists and ankles, which are not believed to be major. A huge relief to everyone that his injuries are not more serious. More on his status as we get it.

The seven-time champion was in total control under the lights in the Middle East as he finished just under 0.3 seconds ahead of his Mercedes teammate Valtteri Bottas and a little of 0.4 clear of Red Bull's Max Verstappen.

Verstappen's teammate Alexander Albon was in fourth place and a full second behind Hamilton, who is aiming to secure a record-extending 95th Formula One win on Sunday.

How the grid looks

"You always want more but it's important to stay realistic. I'm just pushing as hard as I can with the material I have.''

Designed by German architect Hermann Tilke, the Bahrain International Circuit is situated in the middle of the Sakhir desert.

Unveiled as an F1 venue in 2004, its first ten F1 races were day races but reverted to a night race in 2014 to celebrate 10 years since its opening, and has remained a race under the lights ever since.

The circuit is 5.41 kilometers long with an even combination of straights, turns and tight bends, which makes it an ideal track for the all-round drivers and the most powerful engines.

Freshly crowned world champion Lewis Hamilton showed no signs of relenting as he set a new track record to chalk up his 98th career pole, this time in Bahrain. Follow the build-up and the race live here.