Rocket explosion is blow to SpaceX, Facebook and others | Business | Economy and finance news from a German perspective | DW | 01.09.2016

Rocket explosion is blow to SpaceX, Facebook and others

After a thunderous explosion rocked SpaceX's main launch pad in Florida, destroying a rocket and a satellite Facebook was going to use to beam Internet to parts of Africa, companies are counting the cost. 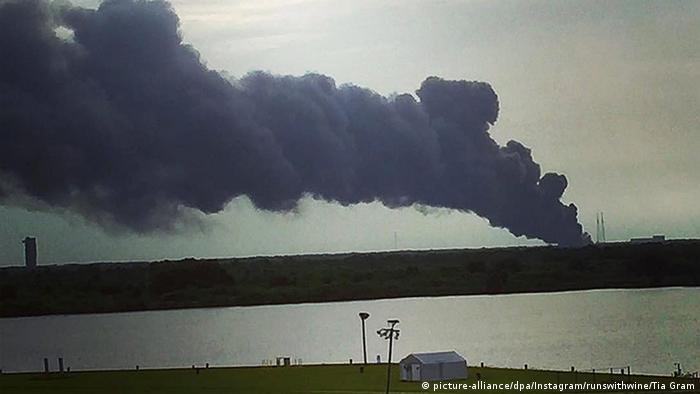 No one was injured in the massive blast that left a Falcon 9 rocket engulfed in flames in Cape Canaveral on Thursday. But while the human cost was zero, financially the accident could leave its mark on several involved companies' bottom lines.

The explosion was a major setback for the private launch company SpaceX that billionaire entrepreneur Elon Musk set up in 2002 to make space exploration more affordable.

SpaceX had already been working at full tilt to get through a backlog of launch orders that arose after another mishap last year in June. At the time, a rocket support strut snapped and evidently allowed helium to escape.

It still isn't clear just how badly the latest explosion damaged the company's launch pad, which it had been leasing from the US Air Force. NASA, one of SpaceX's biggest customers, also said it wasn't sure what - if anything - the blast would mean for future missions.

SpaceX hasn't debuted on the stock market yet, but shares in Musk's other companies, Tesla Motors and SolarCity, were respectively down 4 and 5.5 percent on Thursday, though it wasn't clear if that was attributable to the Falcon 9 blowing up.

Another company, Space Communication from Israel, also saw its stock price fall 8.9 percent. That's the company that owned the satellite the SpaceX rocket was scheduled to hoist into orbit this Saturday. Its CEO said in a statement to the Tel Aviv Stock Exchange that the loss of the payload would have "a significant impact" on Space Communication.

The satellite was going to be used to boost data connectivity to large swathes of sub-Saharan Africa by Facebook and Eutelsat, who were planning on leasing bandwidth as part of Mark Zuckerberg's Internet.org initiative.

"I'm deeply disappointed to hear that SpaceX's launch failure destroyed our satellite that would have provided connectivity to so many entrepreneurs and everyone else across the continent," Zuckerberg wrote on Facebook while on a trip to Africa.

Eutelsat estimated the potential impact of the botched launch exercise at around 50 million euros ($56 million).

A reusable SpaceX booster has sent off a new docking port to the ISS and returned to Cape Canaveral. Both the rocket and the port are part of a new technology which will ultimately transport astronauts to orbit. (18.07.2016)