Volkswagen has disclosed that a robot has killed a contractor involved in its installation. The fatal accident happened at VW's Baunatal plant, north of Frankfurt on Monday. 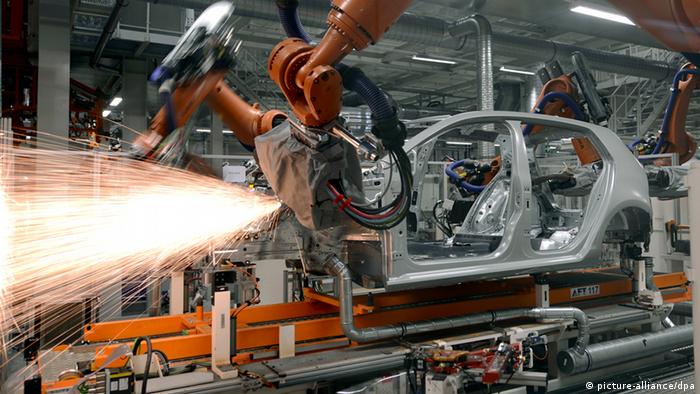 Volkswagen uses robots for a range of tasks such as welding

Human error was likely to have been to blame and not a problem with the robot, said VW spokesman Heiko Hillwig late on Wednesday.

The 22-year-old victim was a member of a team setting up the stationary robot. It grabbed and crushed him against a metal plate, Hillwig said.

The man was resuscitated at the factory but died later in hospital, he said.

The Baunatal plant in Germany's central state of Hesse produces mainly transmissions and electric motors and employs about 15,500 workers.

The contractor worked for a firm from Germany's eastern state of Saxony.

Charges, but against whom?

Another contractor present was not harmed, Hillwig said.

Such robots normally operate within confined areas at the plant by grabbing auto parts and manipulating them.

The robotic line being assembled had not been formally handed over to Volkswagen, the spokesman added.

The German news agency DPA said prosecutors were considering whether to bring charges, and if so, against whom.

German carmaker Volkswagen has seen another dip in sales of its core brand vehicles. While more cars were shifted in the company's home market, a renewed monthly decline was logged for overseas areas in May. (10.06.2015)