In the penultimate game of the Bundesliga season, Robert Lewandowski equaled Gerd Müller's Bundesliga scoring record of 40 goals. He paid a touching tribute to Müller, who is currently fighting a very different battle. 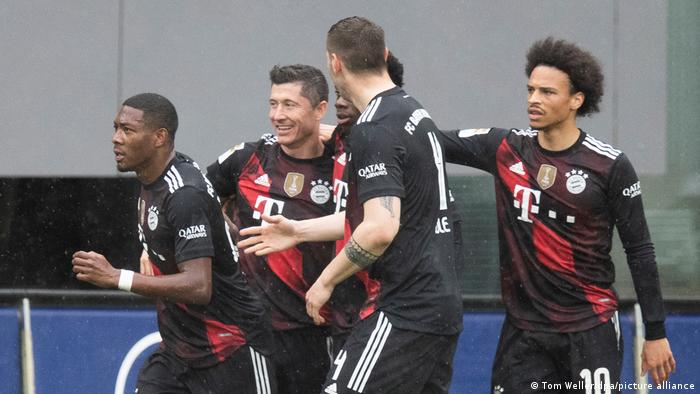 Robert Lewandowski made history in Freiburg

It was a record that stood for 49 years, but, on Saturday afternoon in Freiburg, the legendary Gerd Müller's 40 goals in a single Bundesliga season was equaled by Robert Lewandowski.

After tucking away a first-half penalty for his record-equaling 40th goal, the Pole celebrated by lifting his shirt to unveil a picture of his great Bayern Munich predecessor and the words "4EVER GERD."

It was a thoughtful gesture from the 32-year-old, and, as he ran off through a guard of honor created by teammates and coaching staff on the touchline, it is perhaps only right to take a moment to think about the man whose record he has matched.

The image printed on Lewandowski's undershirt showed Müller in his pomp, black locks flowing in the style of the 1970s, the decade in which he won three of his four Bundesliga titles with Bayern Munich, plus three consecutive European Cups, the European Championship and World Cup with Germany.

Sadly, however, it bore little resemblance to Müller in May 2021, now 76 and suffering from Alzheimer's disease, and having spent the last six years in a care home near Munich. 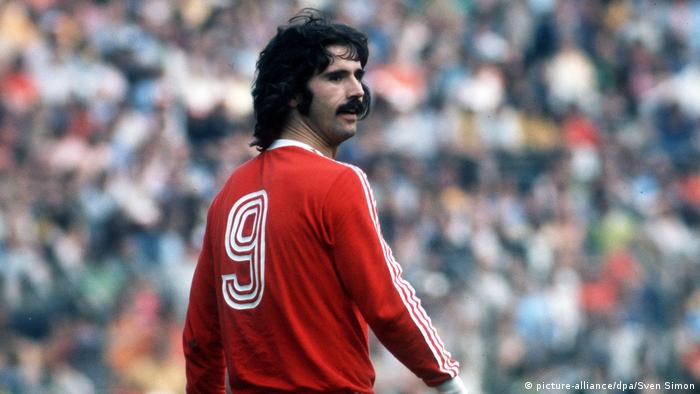 Gerd Müller was one of the all-time great strikers

"He's closed his eyes and is just dozing away, he rarely opens his mouth and can only eat mashed food," his wife Uschi told the tabloid BILD back in December. "He's always been a fighter, he's always been courageous, but now he's sleeping his way towards the end."

It's a devastating situation for any family to find themselves in, and it's heartbreaking that the man who scored a total of 365 goals in 427 Bundesliga games, the man they called "The Bomber," cannot enjoy watching Lewandowski's exploits as much as the rest of us.

The superlatives have long since been spent when it comes to Lewandowski, arguably even before this record-breaking season. But, even by Lewandowski's standards, this campaign has been special.

When he was forced to miss four games in April because of a strained knee ligament, there was some doubt as to whether he would be fit enough to score the six goals needed to break Müller's record. A goal against Mainz upon his return plus three more against Borussia Mönchengladbach made up for lost time.

It was his fifth hat trick of the season, to add to five braces. He even scored four vs. Hertha Berlin in October. Indeed, there have only been four games in which he has played and not scored this season.

The figures are mind-boggling, but Lewandowski doesn't just rack up the hits against cannon fodder. His goals have often been in big games — a key reason why Bayern have won a ninth consecutive Bundesliga title.

There was the stunning glancing header against Borussia Dortmund in November to put Bayern ahead just after halftime en route to a 3-2 win. A month later, it was Lewandowski who rescued a point away at Union Berlin, when Bayern weren't playing well. A curling injury-time effort away at Bayer Leverkusen in December sent Bayern top at Christmas, a position from which they never looked back. 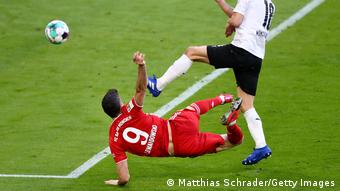 Lewandowski scored one of the goals of the season against Gladbach

It was Lewandowski who kick-started Bayern's comeback in the snow against Arminia Bielefeld in February, and it was another hat trick which saw Bayern overcome Dortmund again in Munich in March.

Even the four-goal haul against Hertha early in the season came in response to three scored by the Berliners. That game was one of seven games this season which Bayern have won by a single goal. In six of those, Lewandowski has been on the scoresheet.

His record-equaling goal in Freiburg was less important and less spectacular, with Bayern already champions and the goal coming from the penalty spot — Lewandowski's eighth successful spot kick of the season.

But it was no less historic, no less momentous, and Lewandowski acknowledged the achievement appropriately. If he was aware of it, the great Gerd Müller would doubtlessly have appreciated it.