This is the third time the son of New York City real estate mogul Seymour Durst has been charged with murder. A grand jury recommended bringing murder charges despite a lack of physical evidence. 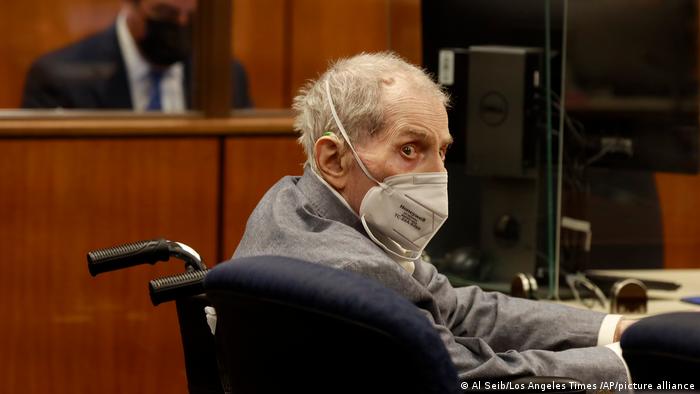 Robert Durst, the disgraced scion of a New York City real estate empire, was charged with the murder of his late wife Kathie Durst on Friday, one week after receiving a life sentence for killing his friend Susan Berman in 2000.

Prosecutors had argued that Durst killed Berman because she was planning to confess to police her role in covering up Kathie Durst's 1982 disappearance.

"The Westchester County District Attorney's Office can confirm that a complaint charging Robert Durst with the murder of Kathleen Durst was filed," Mimi Rocah, the district attorney for New York's Westchester Country, said in a statement. "We have no further comment at this time."

Rocah had recently convened a grand jury to consider the case of Kathie Durst, who vanished and was never found. The grand jury recommended second-degree murder charges.

Who is Robert Durst?

Robert Durst, became famous when, in 2015, he agreed to sit down with a documentarian and be interviewed about suspicions tying him to Berman's death and his wife's disappearance. At the end of the documentary series The Jinx, Durst, apparently unaware that his microphone was still on when he went into the bathroom, made what sounded like a confession to murdering both women.

The 78-year-old is the son of real estate magnate Seymour Durst and the brother of Douglas Durst, who is still the head of the Durst Organization. In 1972, he married Kathleen Durst, who was 29 years old and just shy of completing her medical degree when she vanished on January 31, 1982.

She was last seen at a friend's dinner party, where the host said she appeared distressed and was wearing strange clothing. Kathie Durst left after receiving a phone call from her husband and was never seen again.

In 2003, Robert Durst was charged with the murder of his neighbor Morris Black, whose remains were found floating in a body of water in Texas. Durst argued that he had killed Black in self-defense. He was acquitted of the murder.

Suspicions had long surrounded Durst in the case of his wife and his friend Berman, but he was never arrested until making the confession on The Jinx.

Last week, at his sentencing hearing for Berman's murder, Durst appeared frail and was brought into the courtroom in a wheelchair. Shortly thereafter, his lawyer issued a statement saying his client had tested positive for COVID-19 and needed a ventilator.