Rival rebel groups have clashed at Tripoli's international airport, halting all flights, according to media reports. One person was reportedly killed. 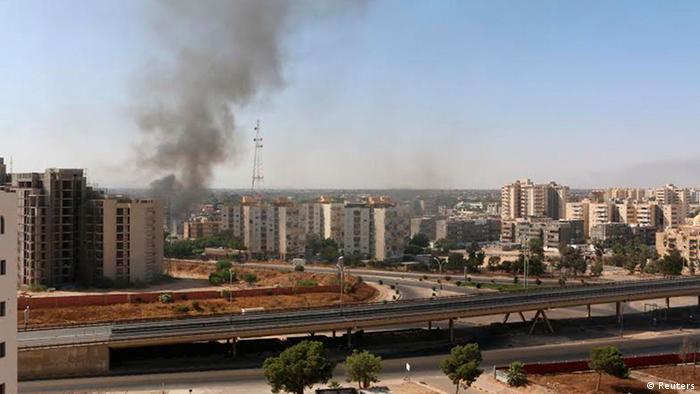 "The traffic at the airport will be suspended for three… days," an official at the state-run Libyan Airways told independent site Al-Wasat.

Earlier on Sunday, heavy fighting erupted among rival militias around the main airport, some 30 km (18 miles) south of the Libyan capital Tripoli.

Libyan television channel al-Nabaa said a militia called the "Stability and Security Force" had entered the airport area, challenging the Zintan rebels from northwestern Libya who have been controlling the airport since the overthrow of Moammar Gadhafi in 2011.

Other reports suggest the attack was claimed by the Operations Cell of Libyan Revolutionaries, a coalition of Islamist militias considered the armed wing of Islamists within the General National Congress, or parliament.

There was, however, no government or other official comment on who was involved in the fighting on Sunday.

Reports suggest rockets were fired at the airport, while residents said they saw thick smoke emerging from near the airport.

Pictures posted on social media site Facebook showed thick smoke at what was said to be the parking area in front of the main terminal.

The fighting comes weeks after a contested general election to replace the Islamist-dominated General National Congress, which has been mired in controversy and accused of hogging power.

Tensions have escalated since May when renegade general Khalifa Haftar launched a military campaign against Islamist militias. Haftar said his campaign is aimed at eliminating "terrorists" from the country.

Libyan authorities have been unable to control heavily armed militias who helped oust Gadhafi in 2011, but now defy state authority.

Sunday's clashes came just hours after the United States warned that the conflict could become "widespread" unless a new parliament is seated quickly and a new constitution drafted.

Voters in Libya have been to the polls to elect a new parliament that, it is hoped, might bring more political stability to the country. Turnout was low and there were some instances of violence, in one case deadly. (25.06.2014)