Riots in Kenya over bus bomb

Protests have broken out in Nairobi, after a bus bomb on Sunday was blamed on Somalis. Tensions between Kenyans and Somalis in the country have spiked since Nairobi committed troops to Somalia last year. 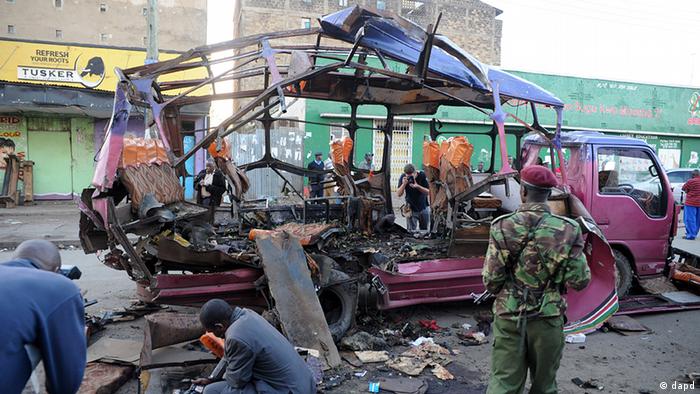 Police in Kenya attempted to break up riots in Kenya on Monday with bullets and tear gas, after a bus explosion in Nairobi sparked outrage.

"It's unfortunate that now people we're hosting are actually turning against us," said witness, Maurice Ouma. Police fired in the air to disperse the crowd.

Kenyan nationals hurled stones and broke into Somali homes and shops in Nairobi's Eastleigh district, which is largely populated by Somalis and is widely referred to as "Little Mogadishu."

Those demonstrating were venting frustration over a bomb attack which had occurred in the same neighborhood on Sunday: a bomb ripped through a minibus, killing seven people, and the attack was blamed on Somali militants.

Al Shabaab, a Somali militant organization, has in the past warned that Nairobi is the target of large-scale attacks since it decided to send its army into Somalia last year to eliminate the threat posed by al Shabaab rebels, whom Kenya has blamed for attacks on its country.

Kenyahas experienced several episodes of terrorist and militia violence recently. Last weekend, cattle raiders killed at least 32 members of the Kenyan police force in an organized ambush. In July, militia carried out gun and grenade attacks on two churches in Garissa, leaving 17 people dead. In September, Kenyan police also reported that they had seized over 150 detonators in Nairobi.