Riots in France - a feeling of injustice

The violent arrest of a young black man has triggered several nights of riots in France. The unrest shows youths in the country's suburbs feel unfairly treated - more so than in the recent past. The incident goes back to Thursday last week. Four police officers are patrolling in the housing estate "Cite des 3000" in Aulnay-sous-Bois, located in France's most destitute department, Seine-Saint-Denis, northeast of Paris. The police hear a warning cry to make local drug dealers aware of their presence. They decide to control the identities of a group of youths standing nearby. But the situation quickly escalates.

The officers push one of the youths, 21-year-old Theo, against a nearby wall. A video posted on the Internet seems to show that Theodore's trousers slip down to his knees without anybody intervening. One officer starts beating him with his baton. Suddenly, the baton goes up the young man's anus, 10 centimeters deep.

The police officer is claiming he only intended to make Theodore's knees give way. "I wanted him to lose his balance and fall to the ground, so that we could handcuff him more easily," he told French media. But Theodore, who's still in the hospital, disputes this version. "I saw him taking his baton and pushing it in deliberately," he said.

An investigation has been opened against the four police officers, now suspended from their job. One of them is accused of rape.

'The youths are feeling stigmatized'

Right after the incident, riots broke out  - first in Aulnay-sous-Bois, then in other adjacent cities. An appeal by Theodore from his hospital bed to "stand united and make peace" seems to have had limited impact. On Wednesday night, hundreds of people demonstrated in Rennes and Nantes. Dozens of youths have been arrested.

That, of course, brings to mind the weeks-long riots in 2005, which broke out after two young people died from electrocution while hiding from police. All across France, youths were burning cars and buildings in the suburbs. Some 3,000 people were arrested and several injured. Epstein: 'The youths in the suburbs are feeling stigmatized'

For Renaud Epstein, a sociologist at Nantes university, the unrest was, and is, the expression of a deep sentiment of injustice. "The youths in the suburbs are feeling stigmatized and unfairly treated. The police deal with them in a brutal way and control them frequently, although ID checks don't even make sense - the police know who they are," he said.

But Arnaud Leduc from the police union Unite SGP in Seine-Saint-Denis says ID controls in that area are an important part of standard procedure: "There are at least 10 local drug dealers in the Cite 3000 and we need to do something about this, don't we?"

"Furthermore, police work is extremely difficult in this Cite, which is known to be an anti-police neighborhood," he added.

The relationship between the youths and police has also deteriorated over the past five years.

And yet, President Francois Hollande promised change for the suburbs when he got elected in 2012. He said he would reinforce the number of police in the field so that they could establish a relationship of trust with the local population. Hollande also had announced two new laws: one to make sure that police officers would have to issue a receipt after an ID control - so that people could more easily go to court against frequent controls. And a second one giving foreigners the right to vote in local elections.

But nothing of all that has happened, says Thomas Kirszbaum, sociologist at ENS Cachan University. "The government dropped the two major reforms that would have made people from the suburbs feel they are being treated more fairly and given them a voice," he stated. 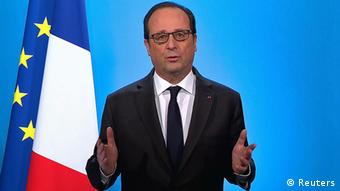 Many people in France have been disappointed by Hollande's presidency

"What's more, a number of laws in the wake of the recent terror attacks have granted the police more rights and mean they are being watched even less closely than beforehand."

Kirszbaum says the terror attacks have also led to rising anti-Muslim sentiment in the country. Inhabitants of the suburbs, where many Muslims live, now feel even more stigmatized.

"Three-quarters of the people in the suburbs voted in favor of Hollande in 2012, but now they are extremely disappointed with the government," he added.

The economic situation hasn't helped. An additional 600,000 people today are unemployed in France, compared to 2012, and most of these additional unemployed live in the suburbs, Kirszbaum says.

Today's situation is different to 2005

So are the riots likely to spread and go on for weeks, like in 2005? Most of the reasons for the youths' anger are still there.

"President Hollande and the local Republican mayor Bruno Beschizza, who is a former police officer, have recognized that something grave has happened and defended Théodore," the sociologist said.

"In 2005, the government had denied some of the facts that occurred during the beginning of the riots and was defending the police," he added. "That largely contributed to the riots spreading to other cities - and multiplied that feeling of general injustice."

Attorneys for the French politician have hit out at financial prosecutors investigating payments made to his wife. Fillon's lawyer has said the prosecutor is "not competent" to investigate the matter. (09.02.2017)