Rioters killed after three days of protests in Pretoria

Pre-election protests in townships outside of the South African capital Pretoria turned violent with at least two people reportedly being shot and killed and scores arrested. 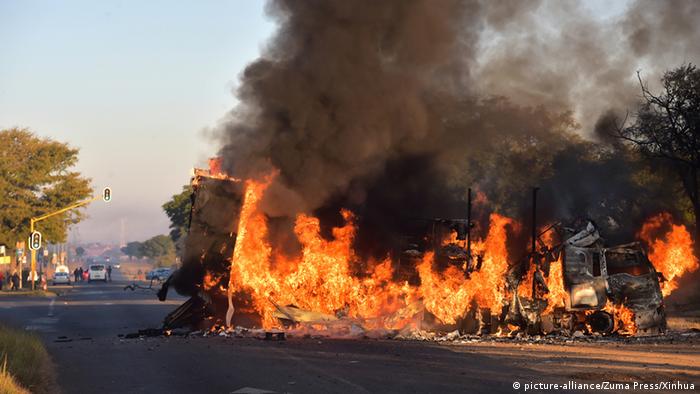 "We have arrested more than 40 people since yesterday and this morning for different crimes related to the protests," Kweza told AFP, adding that peace had been restored.

Residents began setting cars and buses on fire on Monday night after the ruling African National Congress (ANC) named a candidate in the Tshwane municipality for the post of mayor of Pretoria. Protestors said they were dissatisfied with the party's selection of candidates for local elections scheduled for August 3.

The decision overruled the choice of the regional ANC branches. Riots continued into Wednesday and escalated as protestors burned and looted shops owned by foreigners.

Samadoda Fikeni, a political analyst based at the University of South Africa in Pretoria, blames the ANC for the riots.

"It's a societal problem within the ANC itself. It is exacerbated by a ten-year long factionalism that has been taking root. We have this new political culture where violence has become a lingua franca of political communication," he said.

Fikeni however said that most of the protestors were supporters of ANC members who were hoping to secure a nomination for the candidacy of mayor but failed to get the ANC's endorsement. Critics say the candidate that did get the nomination did not know local affairs because she comes from another province.

"When their person loses position they see it as an existential crisis that will be wiped out in terms of employment, in terms of business opportunities or in terms of some of the projects that may come to their own areas, the development projects," he said.

Protests on the rise

The ANC said that the riots are the work of outsiders who have infiltrated the party for their own selfish interests.

"We have names and pictures of people who are ANC leaders who planned this disruption," said Gwede Mantahse, the secretary general of the ANC. "Actually we say this is thuggery, here are the names, police must round them up and arrest them. Then we deal with the situation as a real problem."

Political violence in South Africa has been on the increase since 2010, according to a recent study by the Institute for Security Studies (ISS) at the University of Pretoria. The ISS blames the lack of accountability by the political leadership for this development.

"The fish rots from the head and what we have in South Africa is a lack of consequences," said Dr Jakkie Cilliers, the director of ISS.

"If the leadership is unaccountable and you can get away with violence and breaking things, then why not do so at local government level?" he added.

A series of violent protests broke out in Pretoria over a disputed mayoral candidate for upcoming municipal elections. At least one person has died in the riots. (21.06.2016)

President Jacob Zuma is to challenge a ruling that corruption charges against him should be reinstated. State prosecutors will also appeal last month's decision that Zuma must face 783 charges which date back 16 years. (24.05.2016)