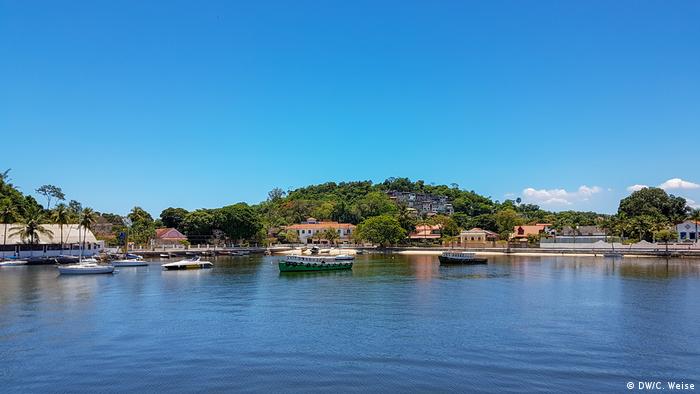 It is hard to believe, but the island of Paquetá is officially a district of Rio. It looks  picture book perfect with its green hills, colorful fishing boats and pink colonial buildings. No cars are allowed on the muddy roads, only an ambulance and a garbage truck. The approximately 3,000 inhabitants usually use their bicycles. 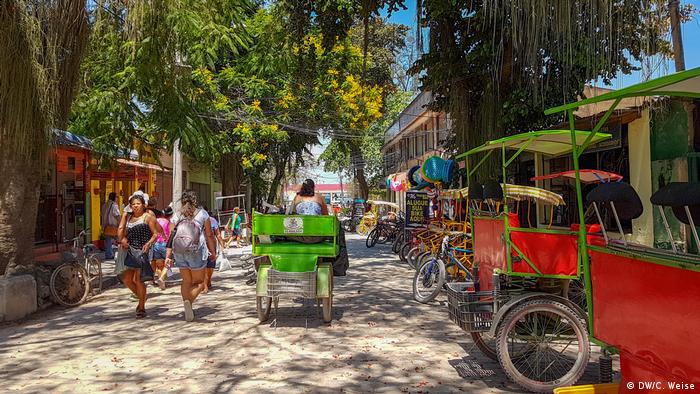 Velotaxis and bike rental stations are located near the harbour

Every weekend more tourists fill the twelve beaches and countless rickshaws. Many bring their own bikes, like Manuel Vieira. "I like to escape to the Paquetá. In Rio the traffic is chaotic and there are not enough cycle paths." However the 35-year-old can't go on any big tours, because the island only has a circumference of eight kilometers. "I just enjoy being here. You can drift, relax and don't have to be afraid of being attacked." 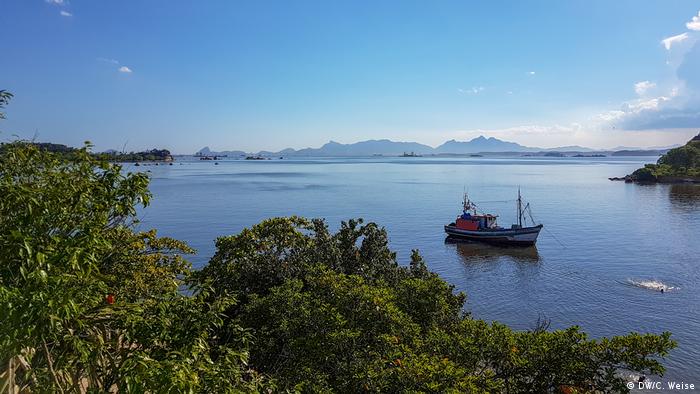 From left in the skyline: Sugarloaf Mountain, the bridge Rio-Niterói and the Corcovado with the statue of Christ

Beach with a view of Sugarloaf Mountain

The island is 15 kilometers from Rio. At Praça XV, in the city center, ferries leave for Guanabara Bay all the way to Paquetá. This dates back to since the 19th century, when the island became a tourist attraction and an increasing number of wealthy families had villas built here. In the last decades of the 20th century the inconspicuous island fell into obscurity. During the World Cup and the Olympic Games only a few visitors came here.

It is gradually being rediscovered by residents and tourists. Most of them come for the peace, the nature and the views. A hotspot is the viewpoint Mirante Boa Vista in the Parque de Darke de Mattos, because from here you can see Sugarloaf Mountain and the iconic Christ statue. But the park itself is also worth visiting with its centuries-old trees, narrow paths and the music pavilion. The Pedra da Moreninha also offers a great view. In the 1970s the huge rock was the setting for a famous Brazilian 'telenovela' soap opera of the same name. Its entrance is somewhat hidden at the end of Praia da Moreninha: it can only be reached by climbing a ladder and crossing a wooden bridge. 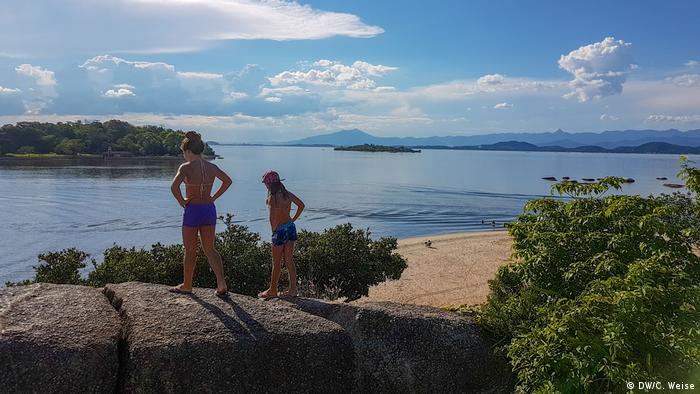 The Pedra da Moreninha offers a magnificent view of the bay

Christina Nascimento sits on her beach towel under a mango tree at the foot of the rock. The twelve short sandy beaches are perfect for sunbathing - ideal for children as, unlike  Rio, it is completely safe. Also the surroundings of the beach could not be more different than the Copacabana. Instead of hotels, boutiques and chic restaurants, there are bike rentals, corner shops and informal eateries. Colorful fishing boats are moored in the water between round-washed boulders. Until two years ago Christina lived in the center of Rio. "I couldn't imagine living in a place where nothing ever happens," she says. "Now I don't want to go back. It's a dream come true here. Everybody knows each other, people stick together and we don't even have to lock our front doors." 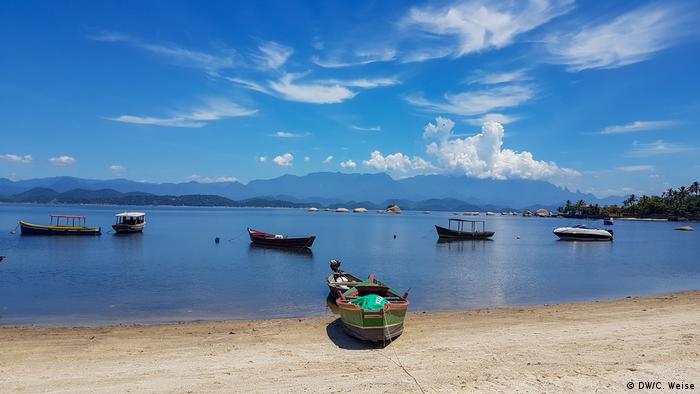 For years, however, the island had to fight against the reputation of being dirty. It is located in Guanabara Bay, which was featured a lot in heavy water pollution reports in the run-up to the Olympic Games. But all twelve beaches of Paquetá Island look clean, only algae make the water appear dark. "We are near the central channel of the bay, so the water circulates well," Christina explains. 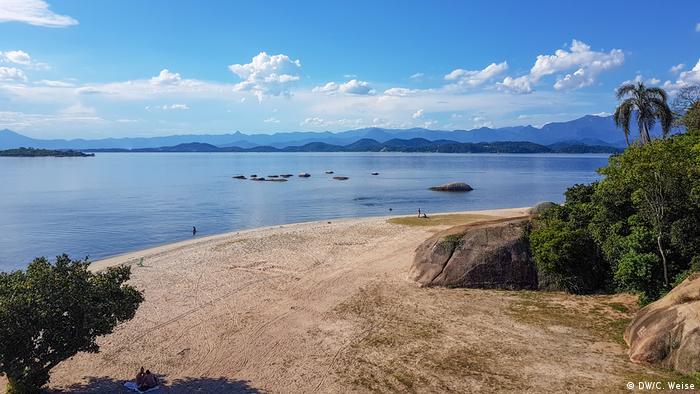 The island itself is not the reason for the water pollution in the bay, but rather the nearby metropolis of Rio. More than 50 rivers flow into Guanabara Bay, around nine million people live in its vicinity, more than half of them in poor conditions. In the slums there is no functioning sewerage system or water treatment plants, so some rivers become open sewers. The river that surrounds the island of Paquetá is clean and has good water quality, Brazilian media promised, most recently in a report by the Brazilian news agency EBC. Should you be unsure, but still want to experience the water, you can go on a fishing tour on a boat or you can rent one of the colorful swan shaped pedal boats at Praia José Bonifácio. 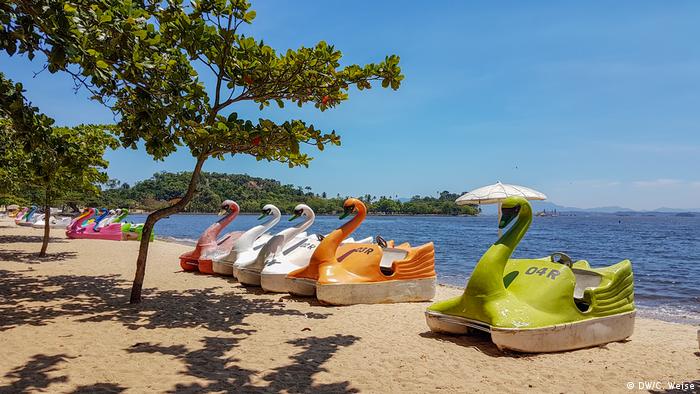 Afterwards you can find a refreshment at Praia dos Tamoios. Locals like to meet in the Cantina da Ilha (Rua Furquim Werneck 70), which offers affordable home cooking. The café "Arte&Gula" provides selected Brazilian dishes along with a side helping of culture, as it is located in the garden of the "Casa de Artes Paquetá" (Praça de São Roque 31), where cultural events regularly take place. The house is in the oldest square on the island, named after its patron saint, São Roque. There is also a beautiful chapel dating from 1697. 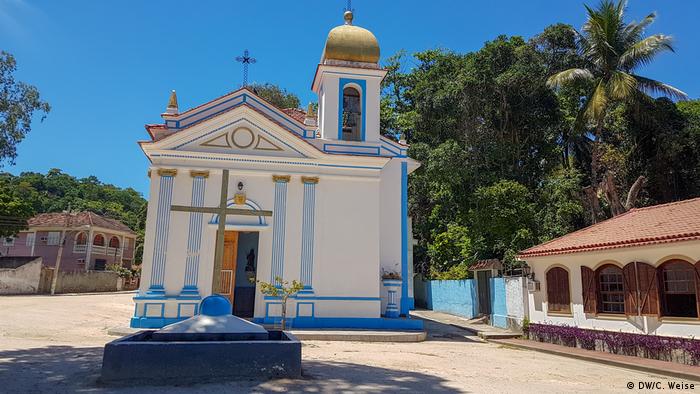 The São Roque Chapel is only open on Sunday mornings for the church service.

Samba, of course, is a must - after all, the Paquetá belongs to Rio. Once a month on Sunday afternoons, samba sounds fill the streets of the island. There is singing and dancing under the open sky well into the night. A peaceful nights sleep can be found in one of the many small pensions on the island, such as the "Solar dos Limoeiros". It is a small guest house with only two suites, a pool and its own garden where the fruits for breakfast grow. A little bigger is the guesthouse "Arcordes ao Luar" (Praça Bom Jesus do Monte, 15), a well preserved house from the 1920s, which is located in a small square very close to the ferry.

Manuel Vieira has gone on board the ferry with a heavy heart. Around him are also some musicians with samba drums, who with their sounds, collectively bid farewell to the dimly lit island.