Two years after the 7-1 World Cup demolition that is one of the lowest points of their football history, Brazil have a chance for revenge on Germany after both men's sides won their semifinals on Wednesday. 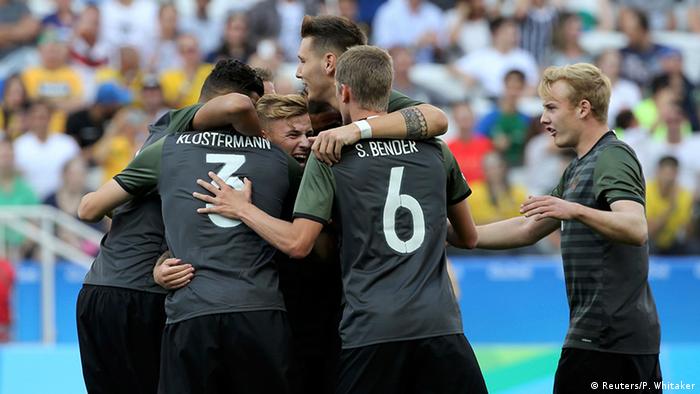 The one-sided nature of the 2014 contest was a major surprise but Wednesday's last four clash, which featured largely players under the age of 23, went broadly as expected, meaning the two footballing superpowers will meet in an Olympic final for the first time.

After Brazil had breezed past Honduras (see below), Germany just had to get past Nigeria to ensure a first meeting of the two countries on the football pitch since the 7-1 thrashing. Goals from Lukas Klostermann and substitute Nils Petersen meant they did exactly that.

Germany have grown in stature and fluency as the tournament has progressed, and started their semifinal clash with the 1996 Olympic champions with the confidence of a team who had scored 14 unanswered goals in their previous two games at the competition.

Their dominance was rewarded after just nine minutes. Winger Serge Gnabry, who has excelled throughout the tournament, was again at the forefront. The Arsenal man found his captain, Max Meyer, with a smart first-time pass before the Schalke midfielder squared for Lukas Klostermann to tap home at the back post.

Although Germany didn't pose quite the same threat in the second half that they had in the first, they looked comfortable and wrapped up the win in the closing minutes, with Petersen tapping home at the back post after a teammate had dragged a shot wide.

Despite another impressive display, the only German player to be in the 2014 and 2016 squads insisted that there's no possibility of a repeat.

"We have the same team spirit, we fight for each other," defender Matthias Ginter told SporTV. "We are very happy to be in the final and to have a medal. It was once in a lifetime. 7-1 was one time in a career, we will not win 7-1 against Brazil."

The win, which guarantees at least a silver medal for both sides, makes it a double Olympic final for Germany's footballers after their women's side beat Canada 2-0 in the last four to book a final date with Sweden, who knocked out Brazil's women's side on Friday. 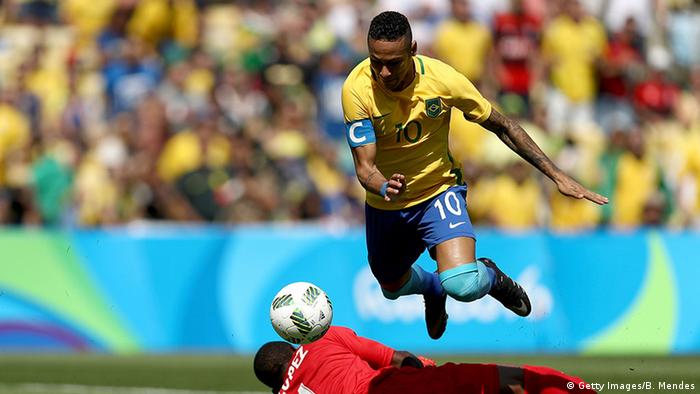 Neymar bundled in the opener after 14 seconds

Neymar was a notable absentee two years ago but the Barcelona superstar made sure no-one doubted his presence against Honduras on Wednesday. The Brazilian captain opened the scoring after just 14 seconds, an Olympic record, and his second goal, a penalty in injury time, capped a 6-0 rout by his side.

"Neymar is a monster. He has the gift of playing football, he delights everyone with his talent," Micale said. "He is the difference-maker in our group in the good sense. Neymar deserves our gratitude because he pushes Brazil to a higher level."

New Manchester City signing Gabriel Jesus added two goals in the first half at the packed Maracana Stadium, while Marquinhos and Luan scored a goal each in the second.

Brazil also started the tournament slowly, with goalless draws in their opening two group games but Wednesday's performance has increased confidence among the home fans: "Hey Germany, just wait, your turn is coming up," their fans chanted at the Maracana.

Whatever happens when the sides will meet in the gold medal match on Saturday at 22:30 CET, there will be a new Olympic men's football winner, with neither a united Germany nor Brazil having won Olympic gold before.

Neymar under investigation for fraud in Brazil

Star Brazilian striker Neymar has found himself at the center of tax evasion allegations in his hometown of Santos. At the same time, he is facing a Spanish court over irregularities when he was signed to FC Barcelona. (03.02.2016)