Rights abuses complicate US support for Nigeria | World | Breaking news and perspectives from around the globe | DW | 20.05.2014

US support for Nigeria in helping to locate the girls kidnapped by Boko Haram puts Washington in a challenging position. Nigeria's security forces do not have a great track record when it comes to human rights abuses. 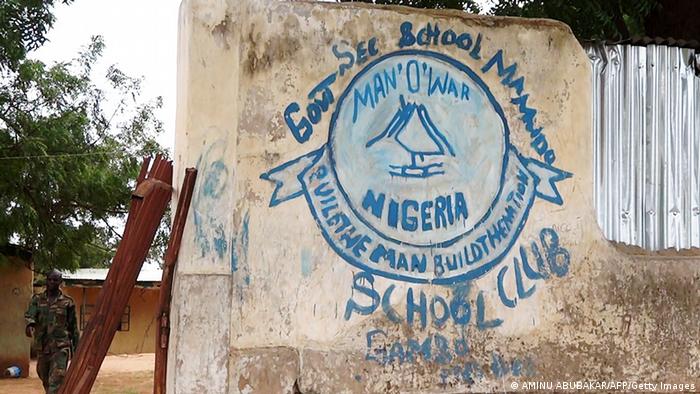 US officials have placed the rescue of nearly 300 Nigerian girls from the terrorist group Boko Haram on the top of its agenda. A US Africom team of experts is in Nigeria to provide communications, logistics and intelligence support.

"Resolving this crisis is now one of the highest priorities of the US government," Robert Jackson, a State Department specialist on Africa, told a Senate Foreign Relations subcommittee last week.

However, strong limitations on US cooperation and intelligence sharing with the Nigerian military exist due to human rights concerns and legal restrictions, foremost the Leahy Law. This legislation prevents the US from assisting any foreign military that has committed human rights abuses.

Local and international human rights groups have reported that the Nigerian troops deployed to combat Boko Haram are notorious for their excesses. Sarah Margon of Human Rights Watch said that Nigerian security forces are known for "raiding local communities, executing men in front of their families, arbitrarily arresting and beating people, burning residential property and stealing money while searching homes."

A central role in aid

Human rights issues have often played a role in the debate about US support to foreign military. Just last month, influential US Senator Patrick Leahy - the initiator of the Leahy Law - moved to block aid to Egypt due to human rights abuses. The issue has and will continue to play a key role in such decisions, said Vanda Felbab-Brown, a senior fellow with the Center for 21st Century Security and Intelligence at Brookings in Washington. 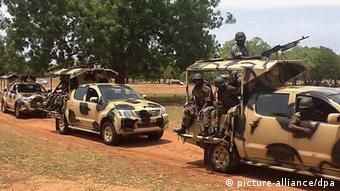 At last week's Senate Foreign Relations subcommittee, the Pentagon's principal director for African Affairs Alice Friend stressed that the Department of Defense was very careful in not violating US law regarding assistance. "We review security force units who may receive assistance and we cannot and do not provide assistance when we have credible information that those units have committed gross violations of human rights," Friend told the hearing.

In the case of Nigeria, the challenge for the US is keeping a balance between support and sending the right message, said Heather Hurlburt, Senior Fellow for National Security at Human Rights First in Washington.

"The goal of counter-terrorism training and support is to make the host country's forces more effective," Hurlburt told DW. "In Nigeria, allegations about bribery, bad trials, and poor leadership as well as clear security service human rights abuses mean that just improving the forces' lethality is not likely to make the situation better and could, by further alienating citizens from their government, make it worse."

A difficult partner for the US

Nigerian President Goodluck Jonathan has been strongly criticized for his halfhearted response following the girls' abduction. According to analysts, this attitude is a key problem for the US and other Western nations offering help.

"Nigeria has been very lukewarm to engage with others," said Felbab-Brown. "They don't want to be subject to oversight which could expose just how brutal the regime under Jonathan is." 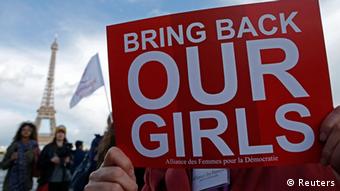 The "Bring Back Our Girls" campaign is getting worldwide support

For the US, Nigeria is a country of key strategic significance. It is the most populous country in Africa with the largest economy and a major regional player - not to mention the oil reserves.

"The US has to weigh how to give the Nigerian government the kind of assistance it wants while making sure it hears a message about what it must do to defeat extremism and regain public trust over time," Hurlburt said.

Observers are divided on whether the efforts to rescue the abducted girls will be successful. Over a month has passed since Boko Haram kidnapped the schoolgirls and no one knows where they are, if they have been divided into smaller groups or already sold into neighboring countries.

"The significance though is important beyond the human interest," Felbab-Brown said. "My concern is a loss of policy focus since the disinterest is there on the part of Nigeria at a time when the country is very fragile."

Nigeria is divided due to political, regional and religious tensions as well as long-standing grievances over how its oil wealth should be shared. Boko Haram's five-year insurgency in the northeast is just one issue facing voters who will go to the polls in early 2015. These long-term challenges should not be forgotten once this acute situation with the girls is resolved.

"This kind of counter-terrorism assistance is given with a human rights goal - the goal of civilians not being killed or terrorized by extremists - in mind," Hurlburt said. "The challenge comes in keeping long-term human rights concerns at the forefront when short-term security shortcomings are so visible and pressing. What we can learn from the Egypt experience, and others, is that we can no longer count on autocracies remaining stable, so the perceived trade-off between stability and rights is more likely than ever to be a false one."

The EU, the US, and some African countries have developed an action plan against Boko Haram. Africa expert Robert Kappel says this is just a first step. (19.05.2014)

Five African leaders agreed in Paris to cooperate in the fight against the militant Islamist group Boko Haram. Now it's up to the international community to make sure they keep their promise, writes DW’s Thomas Mösch. (18.05.2014)