Germany's socialist Left party is bleeding voters to the AfD in its heartland - eastern Germany. As a party conference looms, the party leader is under fire for adopting the AfD's anti-immigration rhetoric. 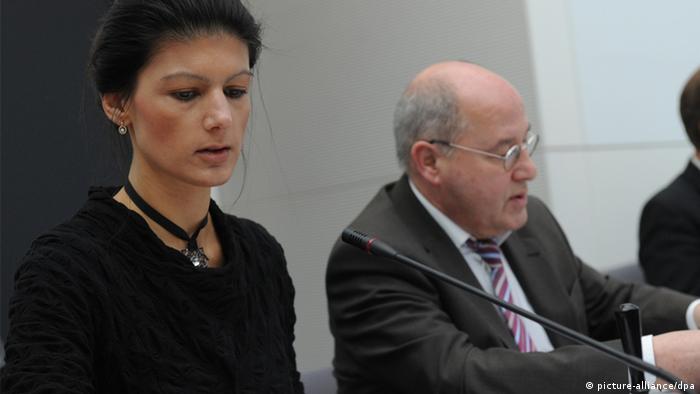 Sahra Wagenknecht and Gregor Gysi don't always get on

Gregor Gysi is not happy. The hugely popular Left party veteran, who stepped down as parliamentary leader last year, has condemned his successors as "marrowless and feeble" ahead of this weekend's party conference in Magdeburg.

The 68-year-old Gysi, who remains one of the Left's most high-profile and charismatic MPs, is angry that his party has allowed the insurgent Alternative for Germany (AfD) to poach from what he sees as the Left's natural voter base - the working classes - especially in formerly communist eastern Germany.

In a new poll for the eastern state of Brandenburg, the AfD has leapfrogged the Left, jumping seven points to 20 percent to claim third place behind the Social Democrats and the Christian Democratic Union. Meanwhile, in Berlin and Mecklenburg-Western Pomerania, two states holding elections in September, the AfD and the Left are now virtually neck and neck. 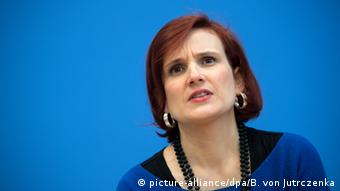 Vying for the same voters

Gysi professed himself "shocked, that the poor, the disenfranchised, the workers are voting for the AfD," in an interview with local media network "RND." "We're no longer the protest party in the East - more in the West."

The old firebrand's critique also extended to the party's handling of the refugee crisis, suggesting that his party had failed to speak to those voters most vulnerable to an influx of potentially cheap labor into the country. "The welcome culture was right," Gysi said, but the party should have shown they were fighting for better job offers for Germany's underclass. "And we should have made clever suggestions for integration," he said.

But Gysi, one of the German left's most influential figures in the aftermath of the reunification and the collapse of communism in the East, remained mindful of party unity - and stopped short of criticizing his successor, Sahra Wagenknecht, directly.

In the aftermath of the New Year's Eve sexual assaults in Cologne in January, Wagenknecht triggered much internal party dissent when she said, "Whoever abuses their guest's rights has also forfeited their guest's rights." The remark, which suggested Germany should effectively disregard the Geneva convention on refugees' rights, proved an open goal for the AfD, whose deputy leader Alexander Gauland, expressed his joy that, "the Left now sees this just like the AfD."

Wagenknecht took back the remark a few days later - though she has raised the issue again when it came to caps on refugee numbers. An interview she gave to the "Berliner Kurier" in March, was headlined with a quote: "Not all the refugees can come."

That again caused an internal party kerfuffle, with the Left's chairwoman Katja Kipping distancing herself from her colleague, and feeling the need to reiterate the Left's official policy: "We work on the underlying assumption that there is a basic right to asylum. And that we reject all upper limits," Kipping said at the time. "We have shared this position widely. And that is the position of the party that I represent. And the other thing, one has to say, is not the position of the party." 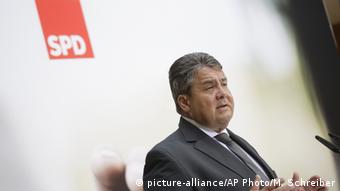 Sigmar Gabriel is struggling for credibility

But Gysi, whose retirement has perhaps not been quite complete enough for some party colleagues, has other ideas that haven't gone down well with Wagenknecht. In another recent interview, he suggested that his party should join the Social Democrats and the Greens to back a common candidate to challenge Angela Merkel at next year's general election.

This "red-red-green" candidate would, he said, represent "a real alternative" to voters, and likely be more effective than the SPD's Sigmar Gabriel. Gabriel, currently vice-chancellor to Merkel and the man most likely to stand as his party's candidate in 2017, is struggling for credibility as the SPD has stagnated as a junior partner in Merkel's coalition.

Of course, Gysi argued, the three left-wing parties would have to find common ground on some basic points - weapons exports, wars, precarious job opportunities, pensions and ecological sustainability. "Everyone is fighting for themselves, but on these questions we could be united," said Gysi.

But Wagenknecht comprehensively doused the idea on Thursday - and sent irritated barbs Gysi's way. "For years we have offered the SPD and the Greens cooperation on the restoration of the social welfare state and a peaceful foreign policy," she told the "WAZ" media group. "But a common chancellor candidate with parties who still stand for dismantling the welfare state, poverty pensions, precarious jobs, TTIP, and weapons exports to war zones - that really would make the Left marrowless and feeble."

The famous German leftist Gregor Gysi has passed the torch to the new leaders of the Left parliamentary faction, Sahra Wagenknecht and Dietmar Bartsch. Gysi's successors aim to bridge divides within the party. (13.10.2015)