Germany’s leading jumper has lost the chance of winning the Four Hills after falling in his first attempt in Innsbruck. Poland's Kamil Stoch won his third leg in a row and is close to securing a second title. 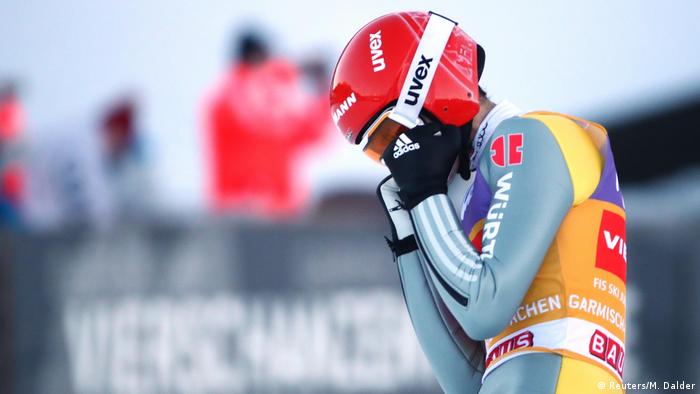 It seemed like a good day for German ski jumpers in the first round in Innsbruck, Austria. Andreas Wellinger jumped 133.0 meters, earning 127.3 points, while Markus Eisenbichler did even better with a score of 130.1 points.

Kamil Stoch, who won the first two legs of the competition, ended his first attempt on top with 138.2 points.

It wasn't all good news, however, as Germany's leading jumper Richard Freitag suffered an injury as he fell during a landing, ending his dream of winning the Four Hills tour in the process.

Freitag, the leader of the FIS Ski Jumping World Cup, managed to get to his feet and walk away from the incident by himself, but lost all chances of winning the competition as a result of the fall.

It is not yet clear whether his injury will keep him out of the 2018 Winter Olympics in February.

The competition's leader, Kamil Stoch, secured his third win in a row after recording a 128.5 meters jump in the second round, bringing his points tally to 270.1. Germany's Andreas Wellinger finished third with 255.6 points, and is currently second in the overall standings. Stoch is expected to seal back-to-back Four Hills titles  by almost 65 points

The last leg of the Four Hills tour will take place in Bischofshofen, Austria, on January 5 and 6.