Rescuers save 2,700 migrants in Mediterranean

Some 2,700 migrants have been rescued off the coast of Italy in a single day. Many had come from Libya, where people traffickers have exploited a standoff between rival governments. 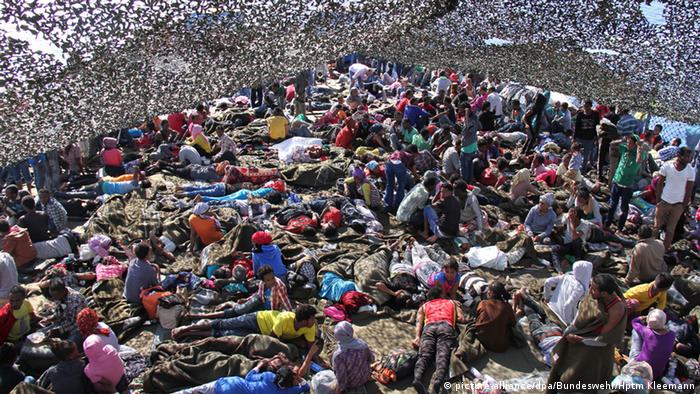 The migrants were rescued from 13 separate boats between Libya and Sicily on Wednesday, the Italian coastguard said.

The German navy ship Werra participated in the operation led by the Italian coastguard, as did the Doctors Without Borders ship Bourbon Argos. The boats that the migrants were traveling in were said to be mainly inflatable.

A spokeswoman for the Italian coastguard said the rescues all took place in an area around 35 miles (55 kilometers) from the Libyan coast.

The overwhelming majority of migrants who take the dangerous Mediterranean route set sail from Libya. People smugglers there have built up a lucrative business, taking advantage of a power vacuum as the country's two rival governments vie for control.

A Malta-based website on migration issues reported on Tuesday that as many as 100 bodies, believed to be of sub-Saharan boat migrants, had washed up near the Libyan city of Tajoura.

The bodies are believed to be victims of a shipwreck off the western coastal town, which lies some 10 kilometers east of Tripoli.

Some 75,000 migrants arrived on the shores of Italy since the beginning of the year, compared to 64,000 in the first six months of 2014. The International Organization for Migration said on Friday that 150,000 migrants had traveled across the sea to Europe this year, with more than 1,900 others perishing on the way.

A record of some 219,000 people crossed the Mediterranean in 2014, with Eritrea, Somalia and Syria among the countries from which most came. More than 100,000 have already made the perilous journey this year, while about 2,000 have died or are missing.

Italy has repeatedly called on fellow EU nations to do more to help accommodate the refugees, with France and Germany recently together volunteering to take some 21,000.

After the fall of dictator Moammar Gadhafi and his regime in 2011, Libya has two parliaments and two governments fighting each other for power, one based in Tripoli and one in Tobruk in the east.