Rescuers in Nepal say there is no chance of finding any more survivors of a landslide that crushed dozens of houses in the northeast. More than 150 people are missing, presumed dead. 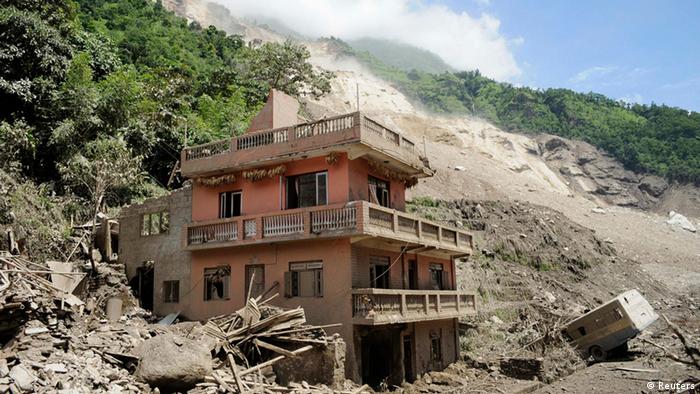 Rescuers searching for survivors and victims of Saturday's landslide in northeast Nepal have said there is no chance of finding any more people alive.

"We have no chance of finding any of the missing people alive under this pile of debris," government disaster management head Yadav Prosad Koriala said on Sunday.

"We have the names of 159 people who are believed to be missing and buried, but there could be even more people," he said.

Rescuers have so far recovered just eight bodies since early Saturday, when the landslide in Sindhupalchok district crushed dozens of houses in the village of Mankha, about 120 km (75 miles) east of the capital, Kathmandu. Thirty-four people were airlifted to safety, including 19 who were severely injured.

The landslide also blocked the Sunkoshi River, leading to the formation of a 110-meter (360-foot) deep lake that is threatening to burst and inundate several villages downstream.

Authorities in the eastern Indian state of Bihar, which is also threatened by possible flash flooding if the natural dam were to burst, have evacuated more than 20,000 people from along the Kosi River, as the Sunkoshi is called in India.

Nepalese army troops have been using explosives to make small breaches to relieve the pressure on the dam, but a government administrator said water continued to pour into the lake, maintaining its volume.

Flooding and landslides during Nepal's monsoon season from June to September kill scores of people every year.