A major German newspaper the Frankfurter Rundschau appears to have been saved from insolvency but with many job losses. Anti-monopolies officials have approved its takeover by Frankfurt's Allgemeine Zeitung. 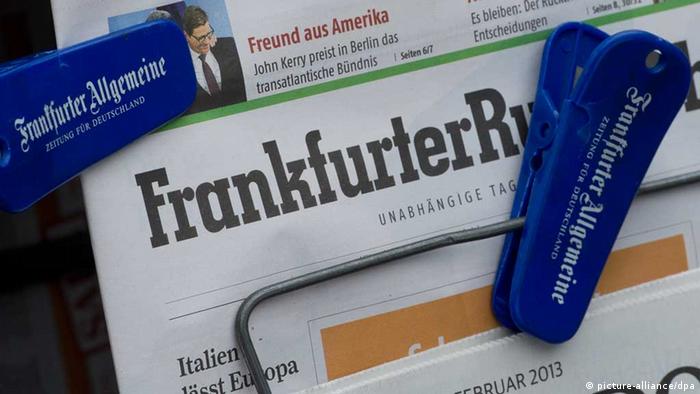 Only some 30 of the Frankfurter Rundschau's (FR) 450 jobs would remain, said insolvency administrators on Wednesday, but added that is survival seemed assured, assuming that purchase details were resolved on Thursday.

The traditional center-left liberal FR, which has subscribers nationwide, was established in 1945 - just after the defeat of Nazi Germany in World War II - as the first daily in the-then American sector to get a publication license to promote democratic freedoms.

The Bonn-based federal anti-monopolies bureau said Wednesday it had no misgivings that a nationwide domination in terms of readership or advertising would ensue if the center-right Frankfurter Allgemeine Zeitung (FAZ) - in itself a leading German newspaper - took over the FR.

Had the Bonn officials rejected the takeover, the liberal Frankfurter Rundschau (FR) would have vanished from Germany's newsstands from Friday.

Insolvency administrators had already rejected as unsustainable a rival purchase bid for the FR from the Turkish media concern Burak Akbay.

The FR's apparent rescue follows the demise of the Financial Times Deutschland in December last year.

Most jobs to vanish

"For the staff a trial of nerves lasting months is coming to an end, with the result that most colleagues will no longer have a future at FR," Mathis said.

When the FR filed for insolvency in November its owners were the DDVG Media Holding, an offshoot of Germany's opposition Social Democrats, and the Cologne-based newspaper concern M. DuMont Schauberg, which also runs the "Berliner Zeitung" and an editorial section in Berlin that also delivers major political and economic stories for the FR.

The DDVG originally bought a larger majority holding in the FR in 2004 when the FR and its associated Frankfurt printing plant had already been in financial difficulties that saw the regional state of Hesse step in briefly as interim guarantor.

Newspaper bankruptcy not likely to be the last

Newspapers have long played an important role in German life. But the bankruptcy of the 'Frankfurter Rundschau' daily suggests that many will not survive the onslaught of the digital age. (15.11.2012)