Republicans Kasich and Cruz team up against Trump

Remaining Republicans John Kasich and Ted Cruz are splitting their resources in a bid to halt Donald Trump. They say a Trump nomination would be a "sure disaster" for the party; Trump spoke of "desperation." 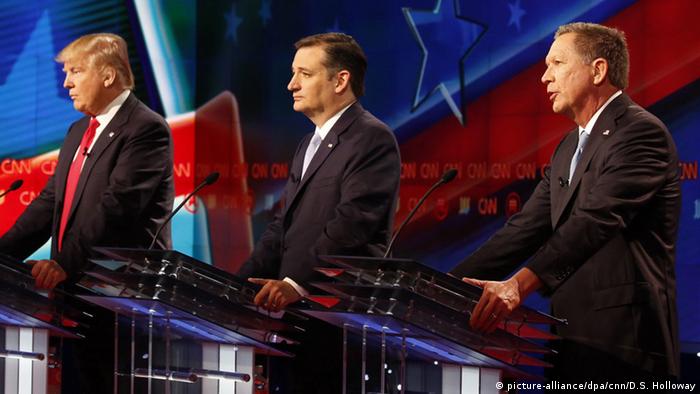 Collusion by a defeated, desperate duo, or is it an honest effort to save the Republican Party from a presidential election relying on the bombastic rhetoric of Donald Trump? The Republican frontrunner saw only a cynical ploy in his rivals' plan to join forces in a bid to stop him securing the nomination outright.

For Trump and his supporters, the traditional Republican establishment is unable to admit defeat to the billionaire property mogul's steamroller of a primary campaign. But in the opinion of the John Kasich and Ted Cruz camps, it's Trump who will have no chance at victory once the wider US electorate - as opposed to partisan primary voters - is asked to pick Barack Obama's successor. 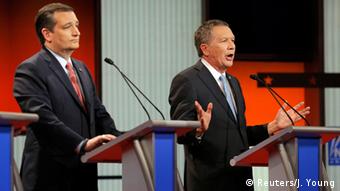 Cruz (l.) positions himself as the conservative candidate, Kasich as the moderate option

"Having Donald Trump at the top of the ticket in November would be a sure disaster for Republicans," Cruz's Campaign Manager Jeff Roe said, announcing his boss' plans to focus his time and resources in Indiana, leaving Oregon and New Mexico to the Kasich camp. "Not only would Trump get blown out by Clinton or Sanders, but having him as our nominee would set the party back a generation."

It's not the primary polls, but rather those looking ahead to November's main event that concern Republican strategists. Multiple recent US polls asking who would win a presidential election out of Trump and Hillary Clinton all agree that the Democrat frontrunner should clean up, only differing on her margin of victory. A Fox News survey had Clinton seven points ahead, another from NBC News and the Wall Street Journal put the winning margin at 11 percent. Kasich and Cruz argue that they could put up a sterner fight against Clinton, or her left-leaning rival Bernie Sanders.

Prominent members of the party, like beaten 2012 presidential nominee Mitt Romney, have joined a Stop Trump movement seeking to keep the reality TV star off the ticket.

"There's a clear divide: Trump's supporters are excited because he's positioned himself against the establishment," Johannes Thimm, Americas Deputy Head of Research Division at the SWP think tank in Germany, told DW. Thimm says this core support amounts to just over a third of typical Republican voters. "But very conservative, ideologically consistent Republicans reject him, saying he's not truly conservative. The business-friendly economic elite oppose him because he's against free trade. And he's hardly attracting minorities at all, because he's insulted them all already. Thanks to Trump's migration policies, Latinos and Hispanics would overwhelmingly vote Democrat."

Keeping the race open until the convention

Trump has already won enough "delegates" - the nominal support candidates can win in US primaries and caucuses - to practically prevent any other candidate from reaching the winning post. What Kasich and Cruz are now seeking to stop is Trump reaching the magic number of 1,237 delegates prior to the Republican National Convention in July. Keeping him short of the winning post would allow some states where Trump won to consider reassigning their support to other candidates at a contested convention.

"Our goal is to have an open convention in Cleveland, where we are confident a candidate capable of uniting the Party and winning in November will emerge as the nominee," Kasich's chief strategist, John Weaver, said when announcing the Ohio governor's plans to concentrate cede the Indiana battleground to Ted Cruz. "Keeping Trump from winning a plurality in Indiana is critical to keeping him under 1,237 bound delegates before Cleveland."

Kasich will focus his resources on votes in Oregon and New Mexico, where Cruz will not compete. 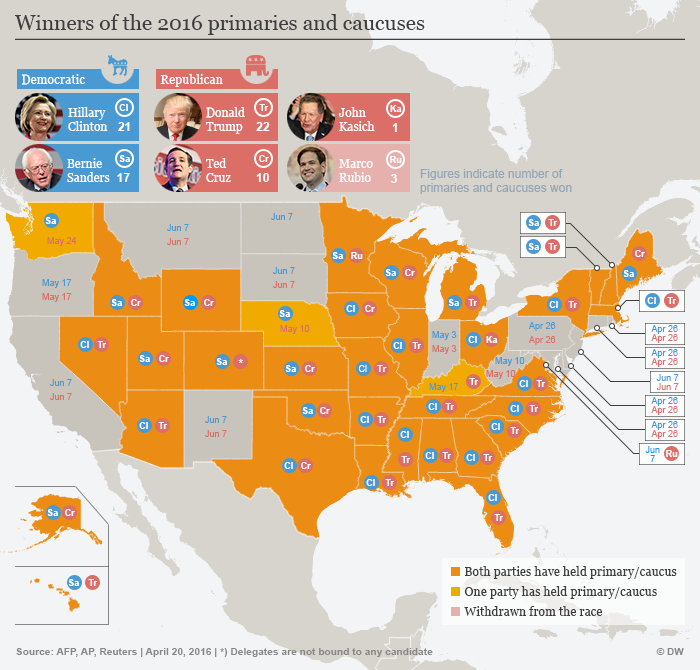 Five eastern states - Connecticut, Delaware, Maryland, Pennsylvania and Rhode Island - hold primaries on Tuesday. Trump is leading the polls in all of them, in a three-way fight.

US researcher Thimm is too wary to offer a prognosis on what's shaping up to be one of the tightest Repbulican contests in decades. Conservative Cruz's own unpopularity in the party, Thimm says, means it's not even clear whether he or Kasich could benefit most from this division of resources. As for the party convention in Cleveland, Thimm says it's even conceivable that "a whole new candidate is plucked out of the hat" if Trump can't get across the winning post.

US front-runners Clinton and Trump declare victory in New York

Hillary Clinton and Donald Trump have achieved convincing wins in New York's party primaries as the bruising campaign continues. State officials responded to thousands of complaints from people turned away from polls. (20.04.2016)