Reporters Without Borders labels Erdogan as 'enemy of press freedom'

The Turkish regime has arrested at least 200 journalists and closed over 120 media outlets since the coup attempt, Reporters Without Borders said. Berlin described the media situation in Turkey as "extremely alarming." 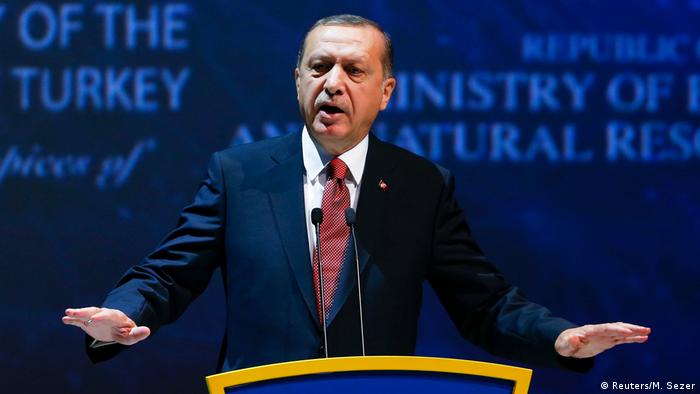 Turkish President Recep Tayyip Erdogan likes the media to be "submissive and docile and sing his praises," Reporters Without Borders said in a report published on Wednesday. The document lists 35 leaders and organizations deemed "enemies of press freedom," as ranked by the group, which is also known by its French acronym RSF.

RSF published the list on November 2, the International Day to End Impunity for Crimes Against Journalists.

Following the failed coup in July, Ankara started a crackdown on the press that worsened an already grim situation in Turkey, according to the organization. Over 200 journalists have been arrested and 125 remained in prison as of early October. The government also eliminated at least 124 media outlets "by decree" the report said.

Erdogan hides his "aggressive dictatorship under a veneer of democracy" according to the RSF. 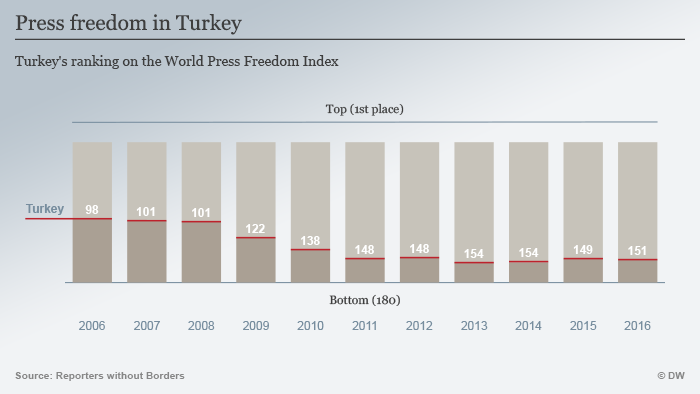 Many activists have accused the EU and specifically Germany of being too submissive towards Erdogan, not least after the expansion of a long-running crackdown against the opposition daily "Cumhuriyet" two days ago.

Germany's government rejected the criticism on Wednesday. Steffen Seibert, the spokesman for the Chancellor Angela Merkel, said Berlin had "major doubts" that detention of "Cumhuriyet" staff was in accordance with legal principles.

"The chancellor and the entire German government find it extremely alarming that press freedom in Turkey is being restricted again and again in a variety of ways," he said.

Also, the spokesman pointed out that the German ambassador to Turkey visited "Cumhuriyet" on Tuesday.

"All those who continue to bravely stand up for free expression and reporting under difficult circumstances in Turkey have our solidarity."

Both Chancellor Merkel and the government as a whole would continue to express this position in future talks with Ankara. At the same time, Seibert said it was important to express disapproval in a way that still makes it possible to "continue the conversation."

Strogmen 'can get away' with oppressing critics

RSF also published a petition urging Berlin and the EU Commission to respond to the crackdown in Turkey. The affected journalists "need quick help from Germany and Europe, for example, by expedient processing of emergency visas." The petition decried "fear and threatened livelihood" among critical publicists and publishers. 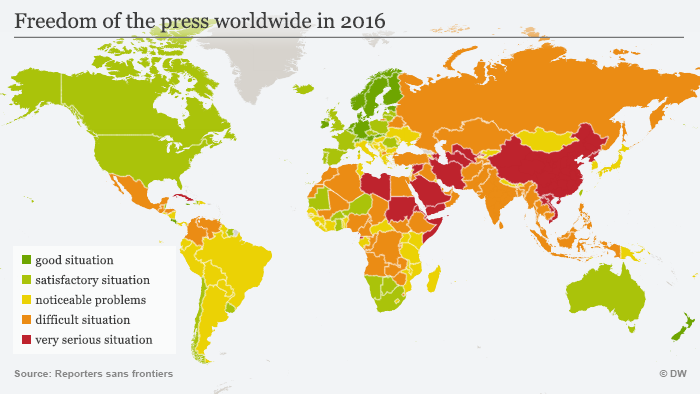 The Turkish president is one of the new additions to the RSF list, alongside Saudi King Salman, Venezuela's President Nicolas Maduro, Burundi's Pierre Nkurunziza and several others. Chinese President Xi Jinping, the Kremlin Chief Vladimir Putin and North Korea's Kim Jong Un are also listed in the 2016 report.

"The numerous new names show that strongmen and extremists of all kinds are still confident they can get away with oppressing free press," RSF spokesman Michael Rediske said. "Some rulers have been prosecuting, torturing or killing critical journalists with impunity for decades."

Earlier this week, the Turkish authorities raided the opposition daily "Cumhurriyet," and arrested the editor-in-chief, a cartoonist, and several reporters. The reasons for the arrests, according to the prosecutors, were suspicions of aiding Kurdish militants and support for the US-based Islamic cleric Fethullah Gulen.

In an interview with DW, former "Cumhurriyet" editor Can Dundar called the accusations "ridiculous."

"It would have been better if they said, 'We don't want to hear any dissenting voices and are not ready to tolerate even the slightest opposition.' 'Cumhuriyet' has been fighting against the Gulen Movement for the last 20 to 30 years," he told DW.

Also on Wednesday, UNESCO published a report saying that 115 journalists were killed on duty during last year. Analyzing reporters' security between the start of 2006 and the end of 2015, the UN agency looked and found that at least 827 journalists lost their lives. UNESCO said this statistic did not cover "the numerous other violations endured by journalists, which included kidnappings, arbitrary detention, torture, intimidation and harassment, both offline and online."