An enormous dinosaur the size of 60 small cars once roamed the earth 77 million years ago. A new report on the well-preserved remains of Dreadnoughtus, or "fearing nothing," sheds light on the larger than life creatures. 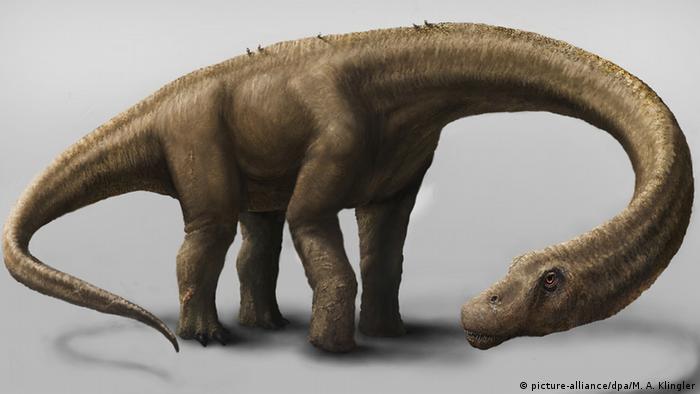 Scientists on Thursday announced in a new report the discovery of a remarkably well-preserved Dreadnoughtus fossil in southern Patagonia. The creature weighed as much as any known land animal, and it wasn't even finished growing, researchers reported in the journal Scientific Reports.

The long-necked Dreadnoughtus behemoth would have measured 26 meters (85 feet) from nose to tail. Its sheer size dwarfs the Tyrannosaurus rex. At 60 tons, Dreadnoughtus weighed as much as seven of the famous beasts.

Kenneth Lacovara of Drexel University in Philadelphia, who discovered the specimen in Argentina in 2005 and led its analysis and excavation effort, said it's the heaviest land animal for which a weight has been calculated with such a degree of accuracy. 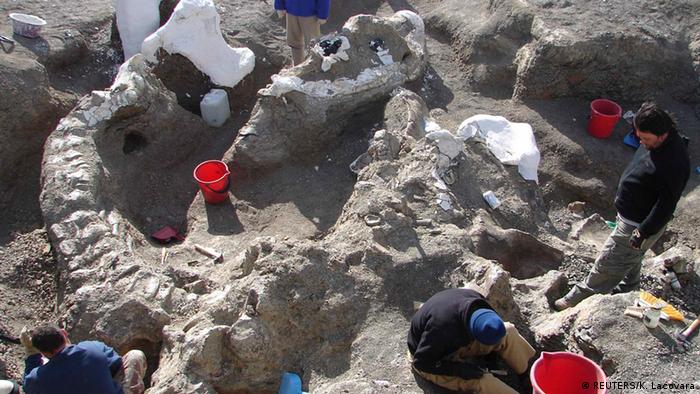 The Dreadnoughtus was discovered alongside another, smaller specimen

"With a body the size of a house, the weight of a herd of elephants and a weaponized [nine-meter, muscled] tail, Dreadnoughtus would have feared nothing," Lacovara said.

Dreadnoughtus' weight estimate was based off bones in its upper arm and thigh. The find contained 70 percent of the types of bone in the dinosaur's body and around 45 percent of its total skeleton; however no skull bones were recovered.

"It's by far the best example we have of any of the most giant creatures to ever walk the planet," said Lacovara.

In order to sustain its incredible size, Dreadnoughtus would have needed to eat great amounts of the plants growing in southern Argentina's temperate forests.

"I imagine their day consists of largely standing in one place," said Lacovara. "You have this 37-foot-long neck balanced by a 30-foot-long tail in the back. Without moving your legs, you have access to a giant feeding envelope of trees and green ferns. You spend an hour or so clearing out this patch that has had thousands of calories in it, and then you take three steps over to the right and spend the next hour clearing out that patch."

To attack the mighty creature "would have been suicidal," said one of the researchers, Matt Lamanna of the Carnegie Museum of Natural History in Pittsburgh. "It's conceivable that a pack of ... predators could take down a sick or old Dreadnoughtus, but a single carnivore versus a 'Dread' would be a drubbing." 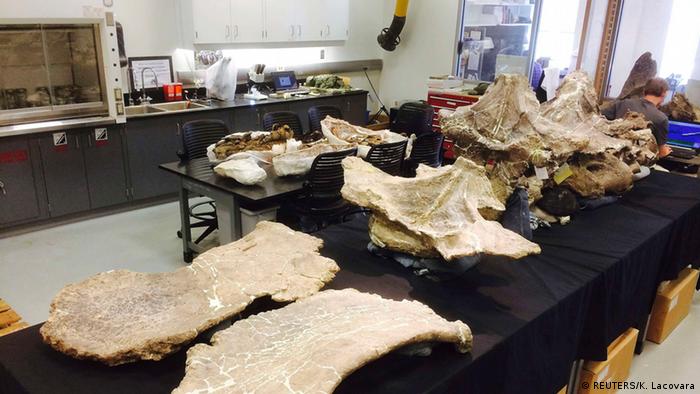 Dreadnoughtus was a member of a group of dinosaurs called titanosaurs, which are thought to be the largest dinosaurs that ever lived. Another giant Argentine titanosaur, Argentinosaurus, may have been even larger, but there are not enough remains to estimate a reliable weight.

The Dreadnoughtus fossil found in Patagonia was discovered alongside a smaller specimen, and researchers say the pair were not even fully grown.

"It appears both individuals died and were buried rapidly after a river flooded and broke through its natural level, turning the ground into something like quicksand," Lacovara said. "The rapid and deep burial of the Dreadnoughtus type specimen accounts for its extraordinary completeness."

"It's misfortune was our luck," he added.