Report says terror suspect warns of attacks in Germany and Europe | Germany | News and in-depth reporting from Berlin and beyond | DW | 05.09.2010

According to media reports, a German-born Islamic extremist arrested in Afghanistan has warned of possible terrorist attacks in Germany and elsewhere in Europe. 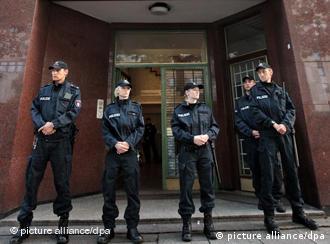 Authorities closed Hamburg's Taiba mosque, after it became a meeting place for radicals

German news magazine Der Spiegel says authorities are investigating reports that a German-born Islamic extremist arrested in Afghanistan has warned of possible terrorist attacks in Germany and elsewhere in Europe.

The man, identified as Ahmad S, reportedly has ties to the Taiba mosque in Hamburg where the perpetrators of the September 11 attacks met. German authorities closed the mosque last month. The Spiegel report says Ahmad S made the statement under interrogation by the US military at Bagram military prison.

The 36 year-old suspect from Hamburg is alleged to be a member of the "Islamist movement of Uzbekistan," according to the report. The group is affiliated with the Taliban and has instigated attacks on Pakistani security forces and NATO troops in Afghanistan.

German media are reporting that Ahmad S was apprehended at the beginning of July. The German foreign ministry has only confirmed it was involved in providing consular assistance for a man held by the United States in Afghanistan.

Spiegel said he flew with his wife, a brother and another married couple to Pershawar via the Gulf state of Qatar before heading to the Afghan-Pakistan border.

US Forces in Afghanistan have detained a German man they suspect is a member of a Hamburg-based terror cell. The suspect attended the same mosque as 9/11 hijacker Mohammed Atta, according to a German daily. (02.09.2010)

Authorities in Hamburg raided and shut down a mosque visited by September 11 jihadists on Monday. Shortly before Ramadan, Hamburg deemed the mosque's extreme Islamist ideology as sufficient grounds for a ban. (09.08.2010)

A German Islamist who apparently wants to renounce militancy and return home has been arrested in Pakistan. The German authorities are divided over how to deal with such former insurgents. (07.07.2010)