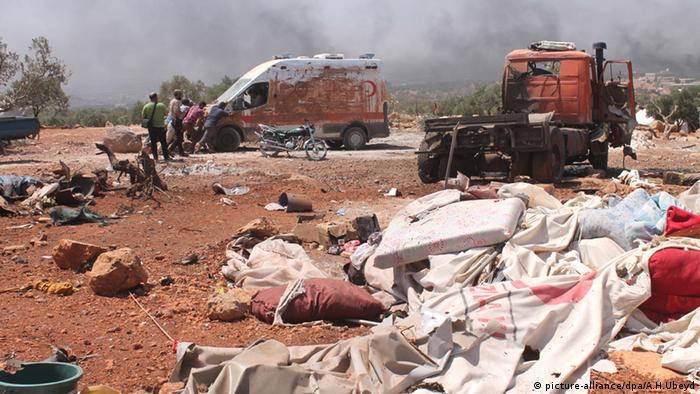 According to Doctors Without Borders (MSF), Saturday's strikes in Millis, in the northern province of Idlib, killed 13 people, including four members of the hospital's staff and five children, and left six medical workers wounded. The strikes also destroyed the operating theater, intensive care unit, pediatric department, ambulances and a generator, MSF reported, adding that the attack would deprive 70,000 people in Millis and surrounding areas of essential medical care.

MSF did not specify which government it held responsible. Silvia Dallatomasina, the medical manager of MSF's operations in northwestern Syria, said four out of five UN Security Council members had taken part in airstrikes in the country.

The government and Russia, which has carried out airstrikes on behalf of the regime since last September, deny targeting health facilities. Navy Captain Jeff Davis, a Pentagon spokesman, said the US had not conducted any airstrikes near Idlib.

Two Chicago-based doctors from the Syrian American Medical Society testified to the UN Security Council about the toll from government and Russian strikes on and sieges of Aleppo's rebel-controlled areas (pictured). During the informal briefing - organized by the United States, Britain, France, New Zealand and Ukraine - the doctors called on the UN to establish a cessation of hostilities. They also asked that the UN ensure the free movement of aid and up to 250,000 civilians in and out of opposition-held eastern Aleppo, which has come under government siege.

"We don't need condemnation, prayers or pointing fingers," said Doctor Zaher Sahloul, who has volunteered five times in Aleppo since the war began after nonviolent protests against the government of President Bashar al-Assad in 2011. "We had enough of that." Sahloul said he wanted to convey "the sense of urgency and responsibility" with his testimony.

Orthopedic surgeon Samer Attar said areas of Aleppo looked like "an apocalyptic wasteland" where doctors regularly performed amputations and other emergency surgeries. "Every day you would witness scenes of crushed skulls, dismembered bodies, mutilated limbs, dead children," Attar said on Monday. "That's everyday life for the people of Aleppo." He added that the Security Council needes to act as a body with "the power to make all of this stop" and to "save lives and limbs on a scale that doctors cannot."

The war has killed 290,000 people, including 84,000 civilians, since 2011, according to a new death toll released Monday by the Syrian Observatory for Human Rights.