Report: Franz Beckenbauer made a false statement to prosecutors

German prosecutors are reported to have found that Franz Beckenbauer made a false statement regarding the scandal related to the 2006 World Cup. There was no immediate comment from the footballing legend. 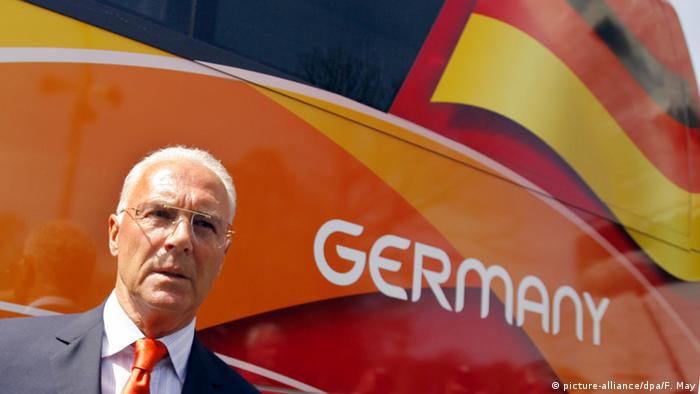 According to a report to be published in Saturday's edition of Spiegel news magazine, prosecutors in Frankfurt, where the German football association (DFB) has its headquarters, have found that some of the answers Franz Beckenbauer gave to their questions were verifiably untrue.

The report says that the prosecutors have uncovered proof that Beckenbauer knew about a dubious payment of €6.7 million ($7.89 million at today's rate) made in 2002, which is at the heart of a scandal over the awarding to Germany of the right to host the 2006 World Cup.  It says that records from an Austrian bank account controlled by Beckenbauer show that he signed off on a transfer of funds that ended up with banned former Qatari football and FIFA official Mohamed bin Hammam.

According to the report, Beckenbauer, who was the president of the 2006 World Cup organizing committee, had told the prosecutors when he was questioned about the payment that he had had nothing to do with it and had no prior knowledge of it. There was no immediate comment on the story from either Beckenbauer or the prosecutors' office.

DFB ordered to pay back taxes

What the funds were really used for remains unclear, but they have been a source of trouble for the German football association (DFB) ever since Spiegel broke the story about the payment more than two years ago.

In October, the Frankfurt tax office ordered the DFB to pay €19.2 in back taxes because it had not declared the €6.7-million payment correctly. The DFB has said it plans to fight that order.

That payment has also triggered several investigationsover allegations that it was used for a slush fund to buy votes in favor of Germany's bid to host the 2006 World Cup.

Beckenbauer was a star player for Bayern Munich, the New York Cosmos, Hamburg and West Germany from the 1960s to the early 1980s. He won the World Cup as a player with West Germany in 1974 and as coach of Germany in 1990.