Members of German Chancellor Angela Merkel's CDU party are up in arms after being told to toe the line on Greek aid by the parliamentary faction leader. The row comes as a third Greek bailout deal seems to be imminent. 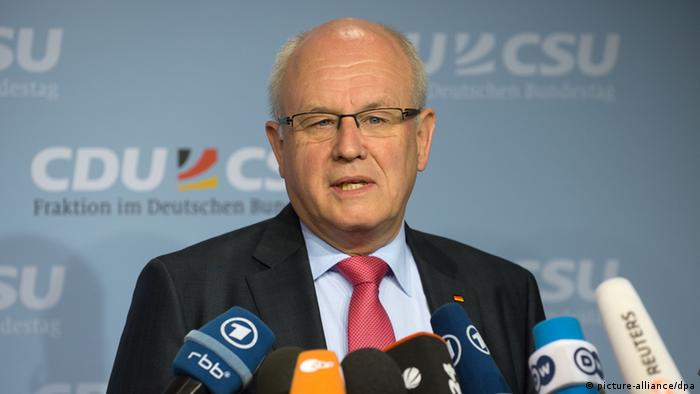 CDU lawmakers voiced indignation on Monday after being told by parliamentary faction leader Volker Kauder (photo above) that those opposing the government on a new Greek deal were not suitable to be members of key parliamentary committees.

Kauder had told the Sunday issue of "Welt am Sonntag" newspaper that "those who vote 'no' cannot stay members of committees in which it is important to maintain a majority, such as the budget or European affairs committees."

Kauder's comments allude to a parliamentary vote in mid-July on whether to begin negotiations with Greece on a third bailout. Sixty parliamentarians from Merkel's CDU-led conservative bloc strayed from the government line by voting "no" to the proposal, which nonetheless passed with the necessary majority.

At another vote in February, 29 members of the bloc voted to reject a four-month extension of Greece's second bailout.

CDU lawmakers have reacted angrily to Kauder's comments, and one of them, Alexander Funk, went so far as to tell "Bild" on Monday that the remarks "disqualified him" as faction leader.

Another CDU politican, Christian von Stetten, voiced his defiance to the same newspaper.

"Such a threat does not impress me at all," he said, and reaffirmed his oppositional stance to the bailout.

"Not a single new argument has been presented for giving more billions to Greece," he said.

The renewed divisions over the possible 86-billion-euro ($94.3 billion) Greek bailout come amid growing indications that a deal may be close in negotiations between Athens and its international creditors.

The question of whether to throw Greece another financial lifeline remains contentious in Germany among both lawmakers and the public, with many voters frustrated at the idea of pumping more German taxpayers' funds into the country.

Germany has contributed the most of any country to the last two rescue packages.

Any new bailout deal must first be approved by the Eurogroup - the eurozone finance ministers - as well as by several parliaments, including Germany's Bundestag.