Religion and the media: Fostering peace

Twelve international representatives from four religions recently took part in an unusual DW Akademie media training in Bonn. They worked together on how to promote messages of peace. 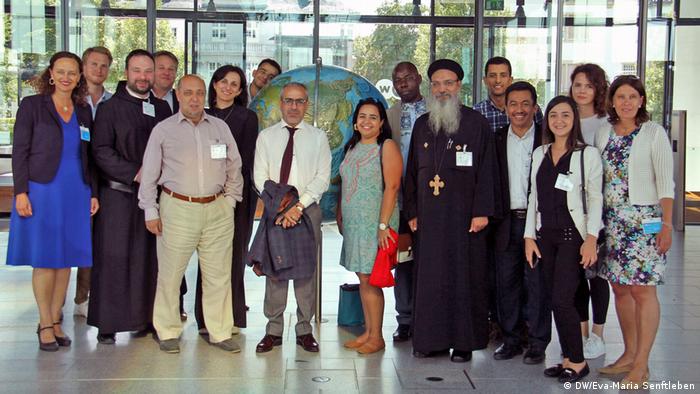 Four religions, one world: Representatives of the Bahà'ì Faith, Judaism, Islam and Christianity at DW Akademie's media training in Bonn.

"I don't want religious hooligans to take over," said Pastor Nikodemus Schnabel. He is the press spokesperson for the Dormitio Abbey in Jerusalem and active on social media. Rusudan Gotziridze, bishop of the Baptist church in Georgia, agreed. "There's this stereotype that religions only cause problems," she said. "But I don't think religions cause the problems. It's the abuse of power that does."

Worldlink: “We have a religious hooligan problem.”

Worldlink: “We have a religious hooligan problem.”

Pastor Nikodemus Schnabel and Bishop Gotziridze together with ten additional religious representatives of Islam, Christianity, Judaism and the Bahà'ì Faith took part in a week-long DW Akademie media training in Bonn. The goal was to develop communication strategies to better convey, through the media, the peaceful values of their faiths.

Religiously motivated tensions, crises and conflicts are increasing worldwide, with many young people being radicalized through social media. The workshop participants from countries including Israel, Ghana, Indonesia and Lebanon discussed with DW experts how to counter these clashes with faith-based messages of peace.

In addition to media and social media training, participants visited Cologne and had a guided tour of the city's cathedral and synagogue. They also visited the editorial office of Domradio, the Catholic radio station, for a panel discussion with four media professionals.

Isabel Schayani is a reporter with the public broadcaster WDR, and a follower of the Bahà'ì Faith; WDR science journalist Lorenz S. Beckhardt grew up in a Catholic environment and later learned he was the son of Jewish Holocaust survivors; Jan Ehlert is a minister in a Protestant church in Troisdorf near Bonn and active in online pastoral care; and Eren Güvercin, is a freelance journalist and member of the Muslim "Alhambra-Gesellschaft", a society that promotes a peaceful dialogue among young Muslims living in Germany and Europe.

The discussion focused on the opportunities offered by and dangers emerging from social media. Being passive was dangerous, the panelists concluded, because that would enable radicals to take over. "Speak up, be honest, express you doubts, be creative and don't be afraid of humor," said Schayani.

Learning from each other

Markus Frädrich from Cologne Cathedral's Provost Office showed participants how PR for religious institutions can be effective. He and his team, for example, have developed an app that not only informs users about mass times and artwork, but also enables them to post their prayers. These prayers are later read out at mass.

The week ended with exchanges and discussions, insight into participants' media-focused community work, and examples of best practice. Maria Dous, communications expert at the Cairo-based Coptic Evangelical Organization for Social Services, said she would apply insights she gained at the workshop. "This experience," she said "shows that religions really can foster peace."

The one-week workshop was part of a collaboration with Germany's Federal Foreign Office. Its task force "Responsibility of the Religions for Peace" has been promoting interreligious dialogue through conferences and workshops since autumn 2016. In a time of religiously motivated tensions, crises and conflicts, the aim is for leading representatives of major religions to be able to promote dialogue and convey the peaceful values of their faiths.