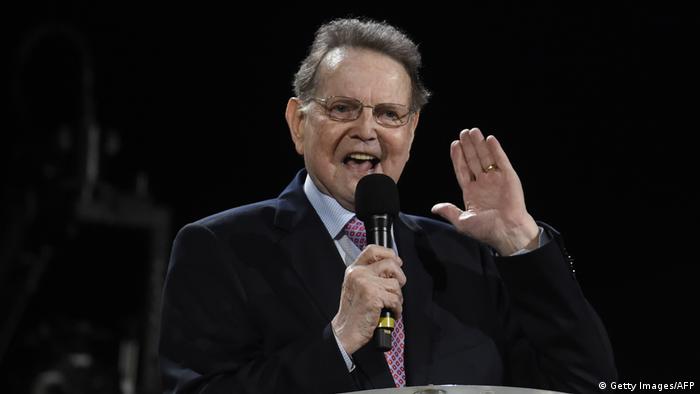 German evangelical preacher Reinhard Bonnke, who claimed to conduct miracles while preaching across Africa for decades, died Saturday at age 79, his church said.

Known as the "Billy Graham of Africa," Bonnke's Christ for All Nations ministry claims he converted 79 million people to Christianity throughout his career.

"It is no exaggeration to say that his work transformed the continent," said his successor at Christ for All Nations, Daniel Kolenda.

Bonnke had a huge following in Africa and preached often at open-air events. His obituary states he held some of the largest live audiences in history, including one in 2000 in Lagos, Nigeria, that drew 1.6 million attendees.

Nigerian President Muhammadu Buhari praised Bonnke, saying his death was "a great loss to Nigeria, Africa and the entire world."

Ifeanyi Arthur Okowa, the governor of Nigeria's Delta state, paid tribute to the evangelist, writing on Twitter that "Bonnke's work all over the world, especially in Africa, supported the faith of millions of Christians across several generations."

Bonnke was born in 1940 in Königsberg, Germany — a city on the Baltic Sea that is now Kaliningrad, Russia.

He began proselytizing as a young boy and in 1967 his ministry started work in Africa. He retired in 2017 due to health reasons.

Christ for All Nations was first based in South Africa but moved its headquarters to Germany in the 1980s to distance it from the then-Apartheid government.

Bonnke, who lived in the US, claimed to raise the dead and heal the deaf, blind and disabled, drawing criticism from skeptics, other faiths and more traditional Christian churches.

His events were sometimes marked by violence. In 1991, deadly religious riots erupted in a Muslim area of northern Nigeria when he announced plans to visit. In 1999, 16 people died during a stampede at an event in Benin City, Nigeria.

He is survived by his wife, Anni, and three adult children.

Evangelical churches in Africa appeal to traditional beliefs in miracle cures as charismatic preachers use electronic media to spread their powerful message to millions and fill church coffers with donations. (13.09.2007)