Refugees in Greece face traumatic births | Europe | News and current affairs from around the continent | DW | 21.12.2016

Giving birth in a Greek hospital is a worrying prospect for many refugees. With doctors performing caesareans on women left in the dark as to what is being done, they have good reason to be uneasy, reports Omaira Gill. 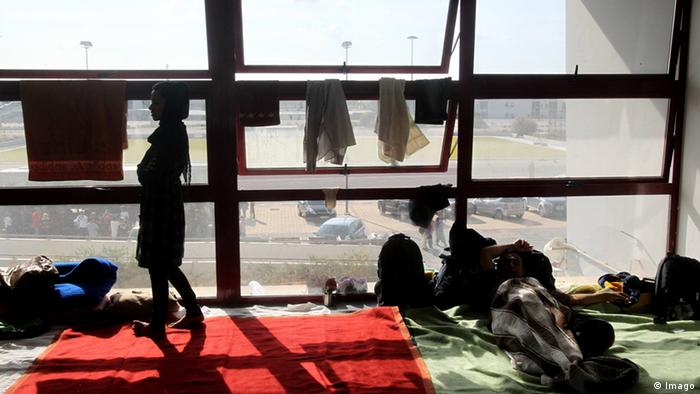 When the Balkan refugee route closed, it left tens of thousands of refugees unwittingly trapped in Greece. Among them were many pregnant women who had set off on their journeys hoping to give birth in their final destination. Instead, they found themselves giving birth in Greece.

At the Elliniko hockey camp in southern Athens, the dismal conditions are plain to see. The lower floors flood in the rain, the smell of the filthy bathrooms permeates the building and the residents say there are rats at night. There is no clean space to bathe newborns. It is to these conditions that new mothers are returned, including those who have had caesareans.

Masooma Hezara was given an emergency caesarean section with an epidural at 36 weeks, but was not aware that the doctors were operating on her until she heard her baby cry. "I did not know anything about what was happening. I was extremely frightened. No one told us anything. My husband was outside the operating theater and didn't know what was happening to me," she said.

Nadia Saeedi told DW that her previous two pregnancies were much happier times. "I am worried about the other things the women have told me about having their babies in Greece. I have no idea what to expect." 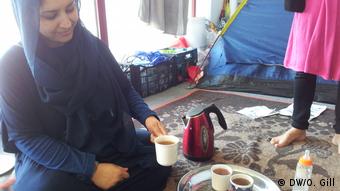 Other women reported being refused pain relief during labor, being unable to communicate with doctors during birth and being unaware of what was happening to them.

Greece has one of the most medicalized obstetric care systems in the world, with a caesarean rate of over 50 percent according to the World Health Organization (WHO). The WHO's recommended caesarean rate is around 10 to 15 percent. The average among EU member states is 25 percent.

For refugee women, there is the added problem of non-consensual procedures. "It's not just a lack of informed consent: There is no consent or information. We've seen hysterectomies when women didn't know they'd had hysterectomies," said Brooke Bauer, founder and CEO of Nurture Project International, an NGO which provides pre- and postnatal support to refugee women at three camps in northern Greece.

"We have seen cases of forced caesareans and a case of a postpartum episiotomy," said Bauer, referring to the case of a Syrian refugee, Mariam, who gave birth to her third child in her tent after a hospital in northern Greece said they did not offer natural births.

When she went to the hospital to have herself and her newborn baby examined, she was subjected to an episiotomy with scissors without her consent or anesthetic. According to her testimony, collected by three independent sources, Mariam said her screams "could be heard across the whole hospital." Nurture Project contacted a human rights lawyer, but Mariam decided not to pursue charges.

"We see a lot of trauma, that's the nature of this crisis, but we see a lot of pre- and postpartum depression, a lot of worry. We do see some PTSD and detachment and it affects breastfeeding across the board, not to mention that the babies are often fed formula without consent anyway in the hospital," Bauer said.

The NGOs can't intervene in hospital policy, Bauer said, so they try to prepare the women they work with as best they can. "They need to be informed, they need to know what's going on. They often don't have husbands or partners or mothers with them. They're often very young first-time mothers, so their experience is informing their entire motherhood," she said.

Mariam's case and others like it concerned the Hellenic Action for Human Rights group of lawyers enough to conduct a preliminary survey into the problems faced by refugee mothers and mothers-to-be. From the 29 women surveyed in camps across Greece, all reported the lack of informed consent, the prevention of birthing partners with the laboring mothers and a lack of postnatal care or instruction. 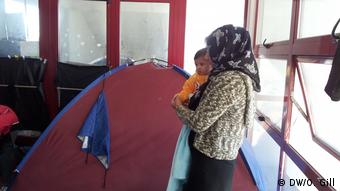 The research was spearheaded by human rights lawyer Electra Leda Koutra, who is also the Greek representative for the charity Human Rights in Childbirth. She pointed out that overly medicalized births are a problem for the Greek population in general: "In 2013, Greece was put under four-year monitoring by the UN for the unacceptably high percentage of caesarean sections, a situation that reflects horizontal violence against women. Many women in Greece undergo unnecessary caesarean sections and medical interventions as a result of hierarchies of power and gender discrimination, poor prenatal care, lack of information and the convenience of doctors.

"A birthing refugee woman understands nothing about the procedure, her and her baby's situation or her options, because she does not understand the language," she added. "Perinatal health is a human right and an issue of social justice. Its circumstances should be safeguarded and a conscious choice of every woman."

Dr Konstantinos Spiriounis, an obstetrician-gynecologist who until recently worked at Elena, one of Athens' main maternity hospitals, explained some of the problems faced by Greece's struggling public health-care system, which has been severely impacted by the country's economic crisis:

"We used to have 7,000 births a year at Elena. Since the crisis, that's nearly halved because people are stopping after one child or not having any at all," he said. Despite the falling numbers of births, aggressive budget cuts and a flight of doctors from Greece mean that public hospitals work under more pressure than ever. 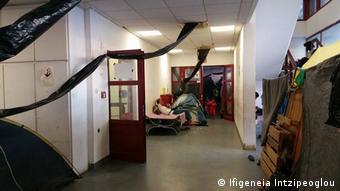 "Hospitals in Athens have dealt with refugees and migrants in the past. The language barrier is a problem. But sometimes we get expectant Greek mothers who we can't communicate with or take a history from because they are substance abusers," he said.

Dr Spiriounis was keen to point out the efforts his colleagues make, often staying on unpaid after a shift ends to cover staff shortages and volunteering at camps in their free time. "We know they prefer female doctors, so we try to meet that need with the presence of midwives. We are aware of the suffering of these women. Tomorrow we could be in their shoes."

For expectant refugee mothers in Greece, the future is uncertain as they remain at the mercy of the international community.

Nineteen-year-old Yalda Saidi feels no joy about the child she is expecting as she sits in her tent at Elliniko camp. "I have such a bad pain in my head sometimes I feel like banging my head against the wall. But the doctors told me it's normal. I cry a lot and I sleep a lot. I don't know what will happen."

After a period of quiet following the closure of the Balkan route, people smugglers have returned to northern Greece and profits continue to roll in. Pavlos Zafiropoulos reports from Thessaloniki. (14.12.2016)

The envisioned relocation of refugees throughout the European Union has not worked. Now more of them can be sent back to Greece. Bernd Riegert reports from Brussels. (08.12.2016)