An unknown number of people have reportedly died after rockets hit buses carrying refugees in eastern Ukraine. Earlier, the Russian foreign minister said Berlin talks on a truce in Ukraine failed to make any progress. 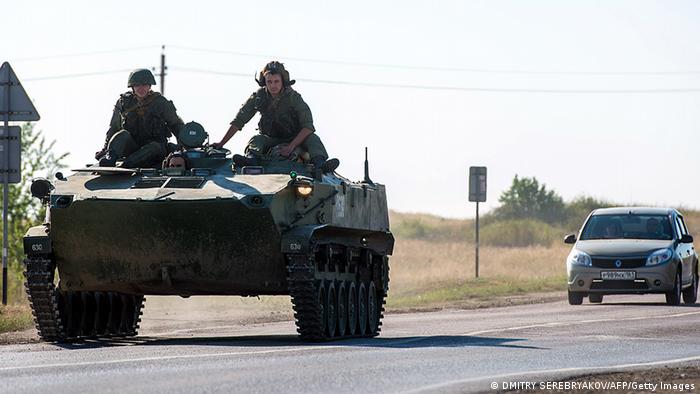 The Ukrainian military and pro-Russian separatists in eastern Ukraine on Monday traded accusations after unconfirmed reports that rocket fire had hit a convoy of buses carrying refugees from the city of Luhansk.

"The force of the blow on the convoy was so strong that people were burned alive in the vehicles," he said.

Another spokesman said rebels were responsible for the strike and that the death toll was still unknown.

However, rebel sources claimed that the government had carried out the attack on the convoy.

The deputy prime minister of the self-proclaimed Donetsk People's Republic told Reuters news agency that rebel forces did not have the capability to carry out such attacks, instead accusing government forces of constantly bombing the road leading from Luhansk.

Around 500 people a day have been leaving the city, a rebel stronghold that has been under siege from government forces and left almost without water or electricity for more than two weeks.

The reports come after crisis talks in Berlin on Sunday between the foreign ministers of Russia, Ukraine, Germany and France aimed at bringing peace to the region.

Russian Foreign Minister Sergei Lavrov said on Monday that the talks had brought no progress toward resolving the conflict in Ukraine.

Lavrov told a Berlin news conference that the talks had failed to produce "positive results in [...] establishing a ceasefire and (starting) a political process."

Lavrov accused Kyiv's new leaders of changing their demands over what it would take to establish a truce between government troops and pro-Russian insurgents, who have been fighting for more than four months in eastern Ukraine.

"Our Ukrainian counterparts, unfortunately, continue setting conditions - and rather vague ones at that - including, as they say, the establishment of an impenetrable border," Lavrov said, adding that Russia wanted an "unconditional" ceasefire.

However, Lavrov said that "all questions" regarding a Russian humanitarian convoy to Ukraine had been resolved with Kyiv and the Red Cross.

The convoy has been parked at the border between Russia and Ukraine for days amid objections from Kyiv, which says the some 300 trucks may be carrying weapons or other aid for the pro-Kremlin rebels.

Moscow has rejected the fears as absurd.

The conflict in Ukraine's Russian-speaking east is in a critical phase, with Kyiv and Western governments fearing a possible Russian military intervention in support of the pro-Moscow insurgents, in view of a build-up of troops on Ukraine's border.

Both Ukraine and the West have also repeatedly accused Moscow of supplying the rebels with weapons.

Lavrov again denied Moscow was helping the rebels, and also defended the amassing of Russian troops at the border, saying it was necessary to be alert when "a real war" was being waged nearby.

Meanwhile, the Ukrainian military says it has encircled the rebel-held town of Horlivka and taken control of smaller settlements in the region.

The government has reported several recent advances against the rebels, saying it has also cut off their communication lines.

The conflict in eastern Ukraine erupted after Russia annexed Ukraine's Crimean peninsula following the ousting of a Moscow-backed president in Kyiv. Separatists have declared "people's republics" across the east and say they want to join Russia.

More than 2,000 people have died in the four months of fighting, and civilians are suffering increasingly as the humanitarian situation deteriorates.