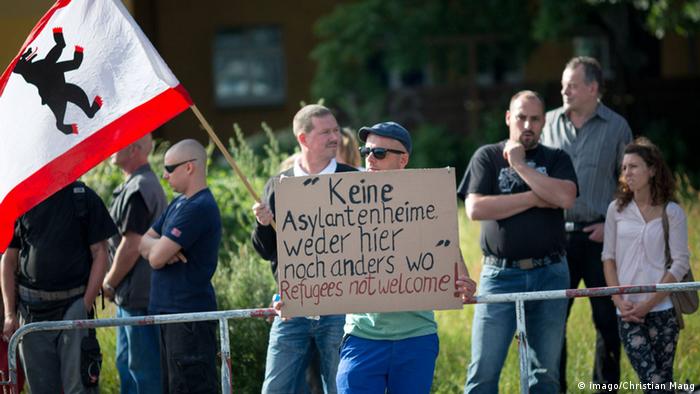 Ali Moradi isn't a fearful man. After all, he's been in life-threatening situations more than once. The manager of the Refugee Support Center of Saxony used to be a helicopter pilot. In 1995, he fled Iran as a refugee and arrived in the eastern German state of Saxony.

In the fall of 2013, however, Moradi was afraid - but not for himself. Rather, he feared attacks on refugees who had been housed in a former army barracks in the town of Schneeberg. A politician from the far-right National Democratic Party of Germany (NPD) had posted an appeal on the "Schneeberg Fights Back" Facebook page, calling on residents to join a torchlight parade outside the asylum seeker processing center.

Moradi quickly rounded up a few friends and drove to the community, which has a population of 15,000. "We tried to form a human chain with about 11 people, as a kind of counter-demonstration," he recalls. Around 1,500 people attended the first of four marches.

The protesters weren't just supporters of the NPD, which has held seats in Saxony's parliament for the past 10 years. Many others with no links to the party showed up to march in the demonstration, arguing that many refugees were economic migrants who would be a burden on German society.

Moradi and his colleagues stayed in front of the barracks until 2 o'clock in the morning. They feared the night might escalate and end in violence, as it had in other eastern cities in the early 1990s. There were xenophobic riots in Hoyerswerda in 1991, and in 1992, a refugee home was set alight while local residents cheered in Rostock-Lichtenhagen. 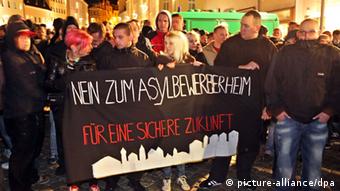 Such attacks never materialized in Schneeberg, but in general, violence and threats have increased, says Moradi. More than 20 years after the attacks on asylum seekers in Hoyerswerda, which left more than 30 people injured, a shelter for refugees has only recently been re-opened there.

A Libyan woman living at the lodgings with her three children contacted Moradi after she was threatened twice in the street. Once a car drove onto the pavement and straight at her and her stroller.

"The woman was terrified," said Moradi. The police offered to escort her children to school every day, but the family just wanted to get away. The Refugee Support Center helped them move to Chemnitz, but attacks on foreigners also occur there. In once case, a Syrian woman was attacked on the street at midday, kicked and beaten by a man as he tried to rip off her headscarf.

According to a study by the anti-Nazi Amadeu Antonio Foundation, aggression towards refugees in the first half of 2014 was highest in Saxony, Berlin, and the western German state of North Rhine-Westphalia (NRW). It documented 155 anti-refugee rallies, and 52 violent attacks, 36 of which were on refugee shelters.

No love for migrants 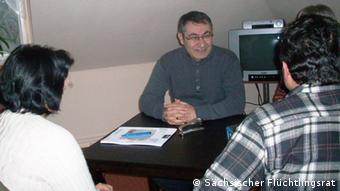 Ali Moradi works with refugees starting over in Saxony

Anti-immigration groups and far-right parties like the NPD are mostly behind the attacks and demonstrations, Moradi said. In Saxony, the NPD goes on "asylum tours" around the state - "they can't gain ground with any other issues," he said. Now the party is gearing up for the state elections in late summer. In July, the NPD called on the state parliament in Dresden to abolish the right to asylum.

Moradi says there are cases where local authorities have completely misrepresented the facts, and in doing so, supported claims of asylum fraud. For example, the official register in the Saxon town of Bautzen from January 2014 says 98 percent of asylum applications were turned down. Moradi says the rejection rate is actually around 32 percent.

The German government attributes most of the rallies and crime related to refugees to the NPD, its youth organization, and neo-Nazis. The statistical record of politically motivated crime has also been given a new category: "against asylum accommodation."

According to the government, between January and March there were more than 30 rallies and 32 crimes motivated by far-right groups targeting refugee shelters. A spokeswoman from the Interior Ministry said, "politically motivated offences against refugee shelters have continued to take place." New figures will be released at the beginning of August. 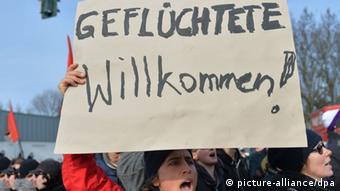 About one fifth of asylum seekers who come to Germany are put up in one of the more than 1,000 lodgings in Germany's most populous state, North Rhine-Westphalia. Birigt Naujoks, director of the NRW Refugee Council, says the number of attacks and rallies has increased significantly.

Parties often try to exploit fears - such as crime, overburdened schools and demographic change - that already exist in the population, she says, citing a comment made by a representative of the interior ministry in Dusseldorf: "It is easier to convince a community to open a waste treatment plant than it is to convince them to open a refugee home."

'We are on your side'

The level of aggression she's seen towards refugees is "frightening," Naujoks said. She recalls a rally outside the NRW Refugee Council site in Bochum in February. The group Kameradschaft Volkssturm Deutschland (a name reminiscent of Nazi-era terminology that means Comradeship People's Militia of Germany) showed up with about 30 people, with slogans like "Foreigners out," and other messages of "pure hate" that Naujoks says she would rather not repeat.

The "asylum tours" organized by the anti-Islamification Pro NRW party during the local and European election campaigns are full of similar messages, Naujoks said. And the results from these polls show that "in some places these types of activites are quite successful."

On the other hand, she says there are also many counter-demonstrators to show the refugees, "don't worry, we are on your side." 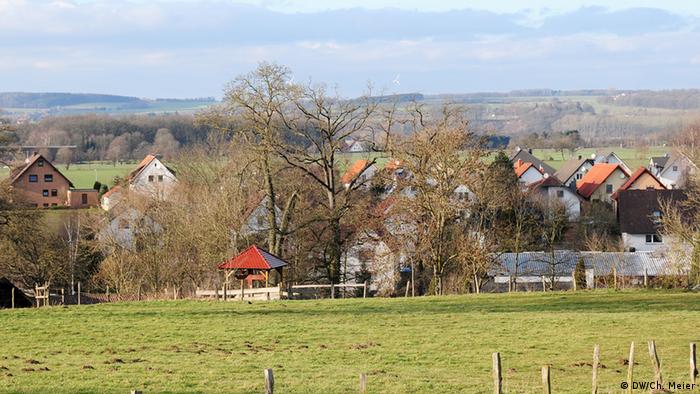 Small towns such as Wimbern, population 800, worry that refugees will affect their lifestyle

Out of sight, out of mind

According to Naujoks, opposition to refugee centers is especially strong in rural areas. In the town of Wimbern, for example, refugees were to be housed in a former hospital. But it was difficult for locals to imagine dropping their kids off at the nursery, "while 500 asylum seekers were living next door, behind a fence that was yet to be built," said Naujoks, adding that to avoid conflict, refugees are often housed miles away from towns.

However, Ali Moradi warns that this could send out a dangerous message that "the refugees are dangerous and we want to protect our people from them." Like his colleague in NRW, he believes decentralized accommodation and giving refugees apartments among the rest of the population are good options. "That would create an understanding that they are people too, that they laugh and cry, that they can also be good hosts."

Birgit Naujoks agrees: "There is a difference between a family of four moving into my house, and 200 people that I don't know moving in next door."

It's not always easy to find suitable accommodation in cities with a tight housing market, admits Naujoks. But if locals are informed early on and invited to participate, situations like the torchlight parades in Schneeberg could be avoided. Politicians also have a responsibility, she says, not to represent refugees "as just a burden."

Naujoks recently organized a "welcome party" in the Sürth district of Cologne, where accommodation for up to 70 migrants will be built in 2015. But even though it will be some time before the new arrivals move in, the "Welcome to Sürth" initiative aims to allay fears and foster opportunities for integration. Naujoks says locals are looking forward to welcoming the refugees to the community.

Hundreds of refugees have died trying to reach the Italian coast in the past few months alone. This situation must be stopped, says Green Party EU parliamentarian Franziska Keller. (26.07.2014)

Maiziere: EU must help refugees at the source

German Interior Minister Thomas de Maiziere wants to combat the causes of refugee flight. To do so, he told DW, the EU has to work with transit countries and the countries of origin. (11.07.2014)

On the 20th anniversary of racist riots in Rostock, the German president has called for a strong democracy that protects human dignity against extremism. The Rostock riots were the worst hate attacks since WWII. (26.08.2012)