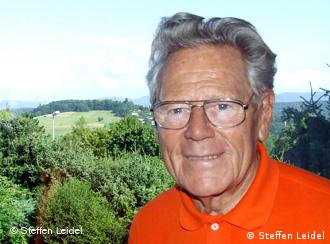 Kueng was born on March 19, 1928, in the Swiss canton of Lucerne and was ordained as a priest at the age of 26 in Basel.

He is a colleague of Pope Benedict XVI and, as a professor of theology in Tubingen, Kueng has been an outspoken critic of the Catholic Church since the 1970s. After questioning the infallibility of the pope and calling for an internal reformation of the Catholic Church, his permission to teach was revoked by the Vatican in 1979.

It wasn't until after the death of former Pope John Paul II that Kueng was allowed to enter the halls of the Vatican once again.

Though Kueng and the current pope share a common background, their theological views differ greatly. While Kueng has focused on inter-religious dialogue, Pope Benedict places priority on tradition and the unity of the Catholic Church. Nevertheless, the two maintain regular communication.

Click on the links below to read DW-WORLD.DE's past interviews with Hans Kueng and related stories on the Catholic Church.

"Christianity Gets on Many People's Nerves"

"The Pope Must Finally Take Some Action"

Hans Küng, a respected scholar of theology and philosophy, likens Pope Benedict XVI in some ways to US President George Bush. He says both need to come down from the sky and take a look at the reality on the ground. (14.09.2006)

Theologian Hans Küng says the West carries some responsibility for the violence over caricatures of the Prophet Mohammed. In an interview with DW-WORLD, he called for reflection in both the western and Islamic worlds. (08.02.2006)

Cologne priest Franz Meurer has been encouraging dialogue between Christians and Muslims for a while now. He also loves to initiate projects: like collecting money to help the Muslim community in Cologne build a mosque. (22.03.2007)

Do you agree with Hans Kueng? Please include your name and country in your reply.