Recommended - Three Tips for a Trip to Cologne

Arzu Galliger, the Carneval princess, shows us here favorite spots in Cologne: Severinstraße, the Claudius thermal baths, and the brewery-pub "Sünner im Walfisch". To see more, look at our video on demand. 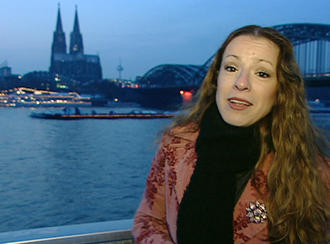 The cathdral, the river Rhine, the charming Old Town, a host of renewed museums, and not least the carefree Rhineland way of life, together make Cologne one of Germany's favorite tourist destinations.

The Cologne Cathedral is a masterpiece of Gothic architecture and is a UNESCO world cultural heritage site. Inside are works of art from ten centuries. The crowning achievement is the golden shrine of the Three Magi. Twelve Romanesque churches also testify to the magnificence of Cologne in the Middle Ages.

Cologne was founded about 2,000 years ago by the Romans. Remnants of that era are still to be found everywhere: the city walls, its gates, towers; even relics of the water pipes. The Roman-Germanic Museum provides a deeper insight into the way people lived in ancient times.

A new address for art in Cologne is the museum district near the Neumarkt. Here the Rautenstrauch-Joest Museum has found a new home. Named after its founders, its modern and spacious ethnographic museum presents treasures from cultures all over the world: South America, Africa, and Asia.

Click on the video below and follow Arzu Gallinger, this year's Carnival Princess, who shows us her "top three" insider tips in Cologne: Severinstraße, the Claudius thermal baths, and the brewery-pub "Suenner im Walfisch".

"Recommended" as video on demand