Amid fears of "Islamic State" jihadists, a group known as "Reclaim Australia" has rallied its supporters across Australia to condemn Islamist extremism. But counter demonstrators say the movement is anti-Muslim. 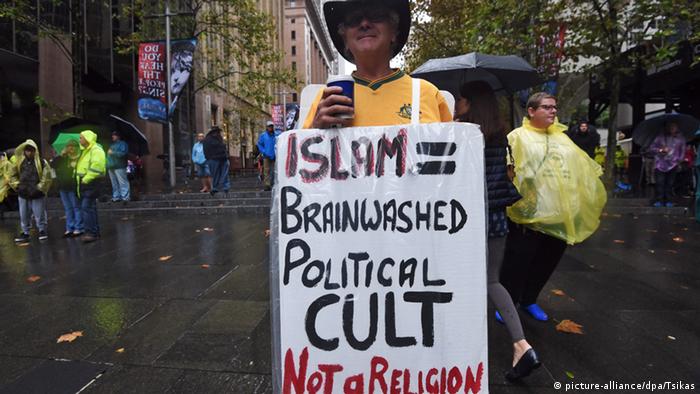 Anti-Islamist demonstrations took place in some 16 Australian cities on Saturday. Many participants donned Australian flags and carried signs that ranged from "One Country One People One Law for All" to "Our laws, our values" to "No Sharia Law" and "Boycott Halal."

Billed as patriotic rallies "organised by ordinary Australia, for ordinary Australians," the movement seeks to "stop halal tax, sharia law [and] Islamisation," according to its official Facebook page. However, opponents of the campaign - led in part by a group called "No Room for Racism" - accuse Reclaim Australia of racism and being anti-Muslim.

It was not immediately clear how many people each rally and counterrally drew. According to figures from the Australian Broadcasting Corporation (ABC), at least 500 demonstrators took to the streets in Sydney, with a smaller turnout reported in other locations, such as Tasmania.

Clashes occurred between protesters in Melbourne.

There has been a growing awareness of the threat of Islamist extremism in Australia over the past year with revelations of at least 70 Australians fighting alongside IS in Syria and Iraq and arrests of alleged IS supporters. In December, Man Monis, an Iran-born self-styled cleric with a criminal record, took 18 people hostage in a downtown Sydney café.

Canberra's involvement in a US-led aerial campaign against "Islamic State" in Iraq further raises the chances of IS attempting a terrorist attack on the Pacific nation.

"Since when is it being racist to love your country and to love the values and culture that you've been brought up with?"

"[The] media and some others have targeted this as a racist rally before any Australian has the opportunity to voice their concerns," Hanson said, according to the ABC.

"Don't deny me my right to have my say. I'm not a racist - criticism is not racism. I am a proud Australian fighting for our democracy, culture, and way of life."

Those who turned out to demonstrate against Reclaim Australia called for tolerance on Saturday.

The organizer of the counterrally in Sydney, Clare Fester, told the ABC that the government under Prime Minister Tony Abbott was partially to blame for the anti-Muslim sentiment.

"[Reclaim Australia] is all about halal food, sharia law, banning the burka. [It's] something I think that's been encouraged by mainstream politicians as well, with Abbott attacking Muslim leaders and telling them they need to stamp out extremism that really doesn't exist, certainly not in Australia."

Over the past year, Abbott's government has also drawn criticism from the United Nations for closing Australia's shores to asylum seekers and detaining many of them in offshore centers. Opponents have accused Canberra of xenophobia.