Readers weigh in on plagiarism charges against defense minister

One of Germany's most popular politicians has been accused of plagiarising passages of his Ph.D. thesis. Karl-Theodor zu Guttenberg has said he will renounce his doctorate, but many say this is not enough. 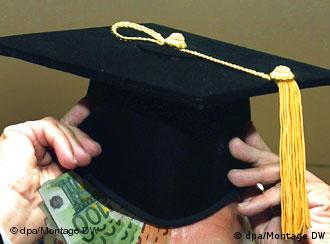 What is the doctor title worth?

Being a "damaged good" he should forget about one day perhaps becoming Bundeskanzler. Sooner or later truth catches up, doesn't it? - Vera, Germany

If he did indeed plagiarize his Ph.D. thesis, he should resign immediately. Granted, a doctorate is not a prerequisite for his job, but honesty is, and no crook should be allowed to hold such high public office. - George, Greece

If he really did cheat on his Ph.D. thesis then he is not trustworthy anymore. - Thorsten, from Facebook

I don't think Guttenberg should have to step down, if he looses his Ph.D. Who cares about his Ph.D. as long as he does a good job for his country. - H. Scheer, Germany

The Spin Doctor who wrote Mr. Guttenberg's statement is a real genius. He would be a big hit in Washington. On second thought, maybe he works there too. - William, Germany

He should resign even now his ministerial position until his credibility is vindicated. He can keep his elected seat. - Rick, Canada

I think it is a question of integrity. Yes, I know that is an aspect not found in politicians these days, just as I am aware that many honors can be politically motivated. However, if someone blatantly cheats for a title, how honest and transparent would they be for more important decisions that affect others? If criticism is fuelled by the opposition, or not, is irrelevant (even if it satisfies the opposition needs) what matters is the integrity of the man. - David, from Facebook

Readers say honesty is more important than a title

The doctorate title is in high demand among managers, lawyers and politicians - many with little time for the required research. Dubious services have turned the situation into a money-making venture.

The institution of academia had been spectacularly corrupted over the past quarter of a century (if not longer), everywhere. I can think of dozens of example in Britain and the US, alone. So, Germany is, by no means, an exception to this disturbing trend. - Homa T. Nasab, from Facebook

In the midst of an ongoing investigation regarding plagiarism in his doctoral thesis, German Defense Minister Karl-Theodor zu Guttenberg has given up his doctor title for good. (21.02.2011)

Deutsche Welle is on Facebook. Post your comments on our stories and tell us what you think.