Readers are criticizing a ban on the sale of "foul-smelling" foreign foods, especially kebabs, by a northern Italian town. Many are calling the ban racist, though some say when in Rome, eat as the Romans eat. 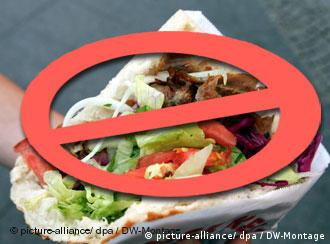 Most readers are calling the Italian kebab ban racist

Government, although it is right to stop sales of food that are not properly stored, cannot and should not forbid the sale of foods that are "foreign." This type of ban smacks of a racist opinion and is unbecoming of an enlightened society. Forbidding the sale of kebabs in Italy will soon lead to the forbidding the sale of bagels in stores, the sale of pizza, the sale of "foreign foods," anywhere in the world. Who's to say what food is "foreign?" Why does this mayor get to choose the foodstuffs that are or aren't allowed? This smacks of dictatorial powers run amok. -- Nelson, US

Shameful act of Bitonci, if he knew about history and identity, and heritage which it seems he ignores, kebabs are a way of serving roasted lamb with vegetables. Does he eat pizza, or pomodoro, or spaghetti? Has he inquired from where [they] came? Poor Massimo Bitonci, may his ignorance be forgiven, or should we just simply not visit unfriendly places, like Cittadella? There are so many vibrant places in the world waiting for people with curiosity. -- Fernando, Portugal

This is just further evidence of immigrants expecting the indigenous population to integrate with them rather than accepting local customs and traditions. Immigrants into the United Kingdom have similar demands and it's causing much resentment and unrest here. I congratulate Mayor Massimo Bitonci on his stand. -- NH, UK

The ban on "non-traditional" foods in Italy is outrageous! This is the most xenophobic (if not racist) action I have seen in years! -- Alexandros, Cypress

Imagine an Italian family being told that they could not eat pasta if they lived in a foreign country. -- Andrew

I am Italian and I find this ban just illogical and racist! What about McDonald's and French brasseries? And the thousands of Italian restaurants in the world? This is not protecting traditions, it is just the fascist propaganda of Lega Nord party! I remind you that one of the party representatives (an EU parliamentarian!) said the values of Breivik - the Utoya terrorist - are very good and sharable! -- Maja

The real situation is that kebabs are forbidden in the historical center of the town. Kebab is also not a Turkish traditional food. But we all love it, but in Italy we really have strict rules about cleanliness, food quality and order. They have to be respected. -- Fabio

This is clearly a thinly veiled attempt to strong-arm Turks out of business. The popularity of döner kebab and falafel should be a welcome addition to any local economy. It's not like döner shops are drug hubs or any legitimate threat to local safety or economy. -- Ashley

It's a populist, nationalistic move designed to distract the locals from their real problems. If there were issues of cleanliness, I'm sure the city or region has health and safety inspectors that could fine or order closure on businesses violating those sorts of rules. If no such rules exist, refer back to my first sentence. -- Brad

A town in northern Italy has sparked outrage among migrants after it passed a ban on the sale of "foul-smelling" foreign foods, especially kebabs. (07.08.2011)