After news that American authorities were seeking information on WikiLeaks through Twitter, readers have sent in a slew of complaints. Most vehemently they oppose the government's apparent persecution of the site. 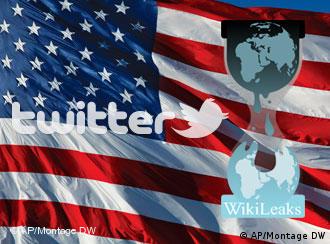 The WikiLeaks drama continues to unfold

Should the US pursue an investigation against WikiLeaks?

They should not be attacking WikiLeaks like they are, or Julian Assange. I believe the only people they should be looking at are themselves and their politics. This should be a wake-up call for the almighty US. -- Brett, Canada

No, the US should not pursue WikiLeaks. They criticize China and Russia for not being free and are no better. They pursue and harass WikiLeaks and Julian Assange despite the fact that what he does is not spying but investigative journalism. WikiLeaks is publishing true information. -- Edith, Germany

My reply is no! I support freedom of the press and transparency in government. -- Nicole, US

The US government and people need to understand the word democracy! -- Harry, Australia

Keep up the good work. No government should be above the law. -- Jimmy, Canada

I think the investigation is an attempt to deflect attention from the reported behavior of the US diplomats and their staff. Now that the information is in the public domain, they will find it difficult to persuade the public that the diplomatic service isn't just the public side of the spying and lying secret service. -- David, Great Britain

No! The US should not pursue an investigation against WikiLeaks. They should instead take responsibility and apologize for the war crimes they have committed and thank WikiLeaks for helping them to be a more democratic and open government. They should also make those people accountable for the collateral murder they have caused in the Iraq war. And instead of secrecy they should encourage people to be more active in the democratic process. The first step of change is to admit that you need to change. And to reveal a problem is the first thing you have to do. If no one sees the problem, nothing will change. Then they have to stop bullying people who are telling the truth. WikiLeaks has revealed the actions of the US government. There is nothing illegal in that. It is the job of a journalist. If the government can't take that they have a serious problem. If you have to hide the actions of the government in the dark, then it is not a democracy anymore. -- Soile, Sweden

No, it should focus on making sure the people are treated well and that situations such as those that have leaked never ever occur again. There is nothing to hide if a government is doing what's really honorable and good for the state. They could, on the other hand, focus on taking care of their Wal-Mart issues instead, if they have so much spare time on their hands. -- Victoria, Sweden

No. Especially when it involves other governments such as Germany. -- Lindsay, US

I'm afraid the question is beside the point; the US is pursuing such investigations and they have advanced considerably, if stories of a secretly-empaneled grand jury are correct. Bradley Manning is already in custody and it would not be surprising if this produced a 'confession' which could be used against WikiLeaks. It will be difficult to convict WikiLeaks of 'espionage' as it is legally defined, but conspiracy law gives the Justice Department much more room to maneuver with charges of 'conspiracy to commit espionage,' which would not require any espionage to have occurred. -- Judith, Great Britain

It just goes to prove that there is no monopoly on stupidity. Icelandic politicians, from the nation that recently put its face on the map by going bankrupt as a result of its less-than-prudent banking policies, now wants to be exempt from the same transparency that one of its members seem so happy to demand from everyone else. Maybe they would prefer if someone would "leak" the Twitter information to the investigators instead? Unbelievable stupidity from people who should know better! -- Gerhard, Canada

If WikiLeaks has investigated the US then surely the US can investigate WikiLeaks. Should the US then want to bring a court case against them, who will bring a court case against the US for breaking the Geneva Convention? Who controls what the US government is doing? No one, it seems. But I am certain of one thing and that is that the American people have a right to know what is being done with their taxes and WikiLeaks gives them the choice to know and ultimately do something about it or not. -- Karen, Germany

The persecution of WikiLeaks' journalists and reporters must be resisted by all governments, including those of the US allies. A way has to be found to focus American politicians on their overt nationalism which serves as evidence of a clinical paranoia of all that is not American. This is important because America's systemic psychotic behavior is driving US foreign policy decisions to the point that it costs thousands of innocent lives whilst destroying the credibility of America herself. Let's remind President Obama of what he said, "America will reach out her hand in friendship to her foreign friends and allies." -- David, Great Britain

If the foreign policy of the US was honorable, then it would have no cause for concern regarding the sort of material vetted by WikiLeaks, which has gone to lengths to protect the innocent. -- James, US

No, the US should not pursue a WikiLeaks investigation. The government of Australia, however, should make extradition requests to the United States for those senior government leaders and media shock jocks who have made nationally televised calls for Assange's assassination, both legally and illegally. As Assange has stated, these people have incited others to commit murder and this is a crime in both the United States and in Australia. If the US won't prosecute them, Australia certainly has an obligation to act in defense of a national widely loved in his homeland and beyond. The US is showing the world, every step of the way in this case, that it does not have regard for the rule of law. It is up to other nation states to do whatever they can to bring them back into the fold by expressing their disapproval for the anarchic direction in which the US is moving. In Canada, Prime Minister Harper's two-time campaign manager and now university professor made such statements about Assange on national television and is presently under investigation by Calgary police. That's what should be done. -- The Blackbird, Canada

I believe the US is embarrassed and enraged about having its dirty washing out for all to see! The more they trawl for dirt on others the more we see their bullying tactics and disregard for the constitution and the lives of those in all their wars - especially their concocted "War on Terror!" It is time for them to recognize the universe is not theirs and is not on their side! -- Ingrid, Australia