DW-WORLD.DE readers were split on whether former US Vice President Al Gore's work promoting awareness of global warming and his campaigning against climate change were worthy of a Nobel Peace Prize. 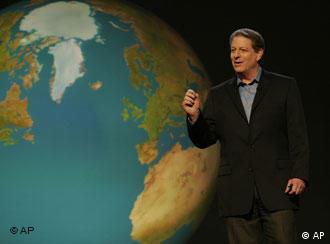 For the most part I agree with the author. Gore is a self-obsessed mental midget, but he sure knows how to milk it for the money. I do object to speaking about Americans in general as not knowing what is environmentally required. A lot of us have practiced conservation for a long time without being told by "oh so superior Europeans" what needs to be done. We just do not constantly talk about it. -- Irene H. Ferry, USA

Frau Bergman, you are right on track about Gore and Nobel Prize. He is such a joke in this country. -- Jerry H. Lair, USA

While Gore may be hated or celebrated like a rock star, as is Bush, he did more to raise the American awareness of global warming and the climate crisis than anyone else has done before. The fact that one man was able to finally awaken the petulant child USA to the fact that it is one of the leading causes of global warming most certainly does deserve a Nobel Prize. To criticize the film "An Inconvenient Truth" because Gore had a starring role -- when without Gore there would have been no film and no subsequent awareness among the otherwise blithe, ill-informed and uncaring Americans is a cheap pot-shot. If Gore's well-deserved Nobel Prize comes as a slap in the face to the worst president in US history then it is deservedly and justifiably so. -- Franz Peter Weeren, Germany 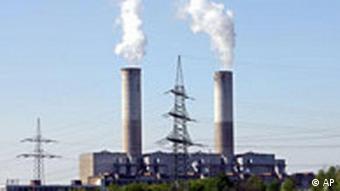 George W. Bush and [Australian Prime Minister] John Howard provided their own small world view about climate change and did not sign the Kyoto Protocol. Al Gore was able to provide an alternative view to the Bush/Howard view of global warning. You need someone with a high profile to counter these claims and views. As long as Al Gore does not run for president next year -- and the Democratic Party has enough high profile candidates already running -- his service to the world will justify a Nobel Prize. -- Stuart John Pearson, Australia

I do not agree with Christina Bergmann. Albert Gore is a worthy recipient of the Nobel Peace Prize, although I personally wish it would have gone to Jane Goodall. Gore indeed made earnest efforts for the environment, and was properly recognized. -- Thomas Hofer, USA

Ms. Bergmann's opinion piece is full of nose stretchers such as "it's the film with which Gore became famous." Al Gore was famous long before this little film. If her correspondence is what Germans learn about America, you are missing a heck of a lot. -- Douglas Taylor, Canada 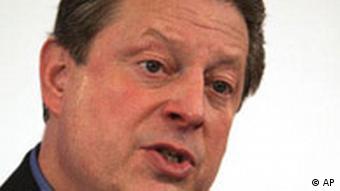 The Nobel Peace Prize winner: Justifiable or not?

Ms. Bergmann is extraordinarily smug about how the "rest of the world has moved much further and doesn't need Al Gore." Really? Germany now has more automobiles per capita than the United States and has an economy that is incredibly dependent on, and therefore captive to, the automobile industry. This is reflected in the increasing passenger and freight miles moving by highway instead of more efficient rail. More significantly, Germany's economy is extremely dependent on foreign trade which, in turn, is dependent on cheap transportation which, in turn, is dependent on cheap fossil fuel. Germans also continue to be horrified at the suggestion of setting maximum automobile speeds. Perhaps the rest of the world has moved far beyond the venal Al Gore, but certainly Germany itself does not show particularly impressive evidence for being a part of that movement. -- Sea MacScot, Germany

I have to say Ms. Bergmann's comments smack of the same tired European anti-Americanism that we have all heard too many times before. The rest of the world doesn't need another voice reminding us that global warming is a massive threat? Is that just because the voice in question happens to speak English and with a Tennessee accent? For better or worse, we live in an age when strong media personalities are desperately needed to spread the truth about such issues as global warming. What other person in the last year has done more to raise the level of discussion on this topic than Mr. Gore? The Nobel Peace Prize had nothing to do with Iraq or the 2000 election in the USA or how Americans feel about their president. I disagree with just about everything Ms. Bergmann has to say in her article, except her admission that worldwide climate change was a subject worthy of note. -- R.W. Dooley, Germany 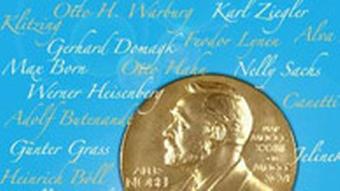 The Nobel Prize wasn't about the 2000 election in the US or the current president, a reader said

The Norwegian Nobel committee can award its prizes to whomever it sees fit. I question Christina Bergmann's assertion that the committee has left itself open to exploitation by Albert Gore. Secondly, I'm amazed by Europe's journalistic corporate mainstream media: The editorial gatekeepers, who -- prior to the committee's award -- nearly unanimously condemned human-caused degradation of our planet's environment, have suddenly decided climate change is a trivial concern; and this overnight turnaround in editorial policy came to pass simply because a politician from the United States was awarded a Nobel Prize. Finally, kindly inform Ms, Bergmann that Mr. Gore received approximately 500,000 more votes in the 2000 election than did George W. Bush. -- Joseph A. Haran, Jr., USA

That British politician's found it necessary to nit-pick the movie says that there are still a lot of people who need convincing in Britain. In the USA, Republicans are already trying to denounce the award (mostly the same people that don't believe in evolution). It is great that Germany doesn't need the assist, but elsewhere, more credibility needs to be brought to the argument before any action will be taken. -- Jim Blevins, USA

While fighting climate change does play a role in spreading world peace, a Nobel Peace Prize for former US Vice President Al Gore was unnecessary and ill timed, according to DW's Christina Bergmann. (12.10.2007)