Some North American readers shared their thoughts on a recent poll that found Europeans preferred Hillary Clinton to be the next president of the United States. 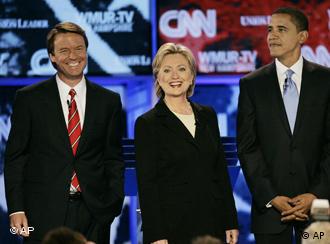 Senator Barack Obama is by a wide margin the best candidate in the US presidential race. His views on the environment, foreign policy, the war in Iraq, and several other domestic issues, i.e. health care, are all the reasons that he is very popular with young and old alike. -- Douglas Grieser, US

I can't believe that Europeans are so foolish as to believe that Mrs. Clinton would be a good president. She has lied and twisted the truth from the very beginning. She has no experience at all. She has done nothing as senator either for New York or the US. Europeans are liberal, I know. But, honestly -- wake up! -- Brent Donohoe, US

Hillary all the way! -- Willy Much, Canada

If the objective is to win the nomination, Hillary has the edge at this point. If, however, we Democrats actually want to win the election then Obama is the only possible choice. Hillary would fire up the Republicans like nothing ever has. Obama, on the other hand, is very charismatic and is already showing signs of picking up a few Republican votes. We Democrats have a very bad habit of nominating candidates who have zero chance of winning the election. Hopefully that lesson has at last been learned. Many of us like Hillary, but not enough to see another Republican president! Obama is the only candidate who can prevent another two-term Republican president. -- Steven Morgan, US 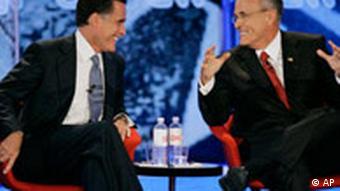 Ron Paul is the only person I can vote for in the 2008 Presidential race. Willi Fausz, US

Hillary Clinton has more government experience than Mr. Obama. It's too bad that Mr. Obama doesn't want to be vice president, they would make a great team running for office together. -- Glen S. Poskarbiewicz, US

Hillary Clinton sold out to insurance and pharmaceutical company pressure when she was working on a national health plan and has received a lot of money from them for her campaign. Barack Obama is the only candidate, as far as I know, who will not accept contributions from Big Business interests. He has my vote. -- Loueda Jensen, US

Europeans and Americans agreed that Hillary Clinton would make the best US president of those running for the position in a poll published on Friday, Dec. 7. (06.12.2007)

Some European papers saw the US Iran report as a danger to Israel, while others took it as hope for diplomacy. In any case, World War Three has been avoided -- at least for now. (05.12.2007)