Readers wrote in defending the tradition of the Zwarte Pieten, the dark-skinned helpers of Sinterklaas in The Netherlands. It's not racist, they say, it's a harmless and much-loved tradition. 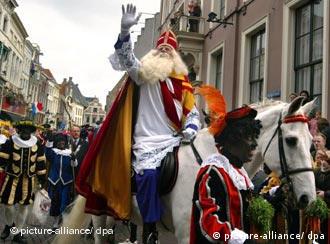 I guess political correctness has become the norm in your magazine. I am a Hispanic person with not-so-fair skin and I am aware of countries all over the world having traditions where foreigners are depicted badly. However I see that as a tradition and not the way Dutch people behave towards people with other national backgrounds. On the contrary they are champions in helping foreign countries. Could you provide us with good news about Christmas instead of poisoning the Christmas spirit? -- Jose, US

I realize that from a foreign perspective the Sinterklaas tradition can look very racist. But in reality this is not the case. Children are taught that Sinterklaas brings gifts to all the children in the Netherlands. But to accomplish this he needs the help of his Zwarte Pieten. They are not seen as slaves but rather as helpers of sinterklaas and it is a very respectable job. Children would probably protest if there was a white Zwarte Piet. Zwarte Pieten are associated with gifts and certain sweets (which we call pepernoten.) They are friendly people who have the most awesome job in the world (working for Sinterklaas.) It is true that in some songs Zwarte Piet will give you a bag of salt, a beating with a bunch of sticks or may even take you to Spain when you do not behave. But this is always in a comical fashion. Everybody gets gifts and nobody gets punished for "being bad." In summary, Zwarte Pieten are not associated with a certain ethnic group. They are a standalone entity. -- Richard, The Netherlands

I'm sorry but I really dislike the tone of your article about Sinterklaas. It is the perception of other countries and people who don't know the tradition that it is racism that Zwarte Piet is black. The current idea in the Netherlands is that Zwarte Piet just happens to be black. In my opinion it would be more an act of racism to paint him white because then you send out the totally wrong message that it isn't correct to celebrate a party with black people! -- Bas, The Netherlands

I think this is foolish. This racial stuff is really getting sickening. Nobody is degrading the black people. This is just a tradition that goes back many years. Some of these opponents should "get a life!" Don't they have anything more constructive to do with their lives? Merry Christmas and Happy New Year! -- Eddie, US

Why can't people just leave traditions alone! It is pretty sad that even here we are no longer allowed to say Merry Christmas for it now has to be Happy Holidays. I think people should really find other things to fill their time with than to take away traditions. I celebrate Sinterklaas here in Ontario and reading these articles upset me. I just want to have our traditions and sayings the way they are! So in other words, if you come to our countries for a better life then do so, but don't try to change our country and our traditions to better suit you! -- Danielle, Canada

Zwarte Piet is black because he used to enter the houses through the chimney in order to deliver the presents to the kids. The kids put their shoe in front of the fireplace and usually put something to eat in it for the horse of Sinterklaas - straw, or a carrot. Later the afro cut of the hair was added to it. That has to change but as for the 'blackness' of Zwarte Piet it is utter nonsense to call it racism. -- Pieter, The Netherlands

Before you even think about taking this festival into racism, you ought to dip into history. First of all, there is a lot of symbolism to this festival. Secondly, Sinterklaas existed before racism even existed. Thirdly, children understand so much better what the real meaning is. So, do your homework and then try to make sense of this festival. -- Karin, The Netherlands

Political correctness gone mad, as usual. The role the Zwarte Piet plays in today's Holland is very positive: a loyal helper of Santa's, communicates with the children, is always happy - what's wrong with that? So, he is black - and no longer a slave. There are always some stupid people who want to change everything that isn't broken. So the Dutch Santa has helpers who are black, so what? The British and American Santa has helpers who are midgets - should they change because it makes people who don't grow very tall look bad? I say those who criticize the Dutch tradition and their nice Zwarte Pieten should get a life and stop trying to sanitize everything beyond belief. -- Dorotheen, Great Britain

Children across Europe eagerly await the arrive of St. Nicholas on December 6. But in Holland, the tradition has racist implications that the Dutch aren't quite willing to give up. (05.12.2010)