DW readers come down clearly in favor of the Swiss referendum to enact stricter deportation laws. Foreigners will now face deportation for serious crimes in Switzerland. 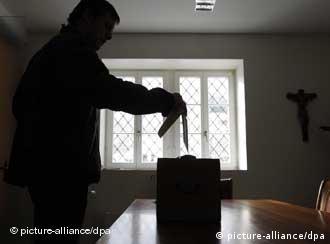 More than 52 percent of voters backed the initiative

Does the proposal to expel foreigners convicted of crimes discriminate unfairly?

Of course not. Laws are to be respected, people have to be responsible for their own actions and accept the outcome. Why should a county that accepts people with the best intentions, not act when those (best intentions) are disregarded? Enough of the politically correct nonsense. I believe the majority of people in any country want to live their lives respecting of others, especially foreigners. It should be a privilege for anyone who immigrates to another country in search of a better life, not a right. I am an immigrant to this great country and I did my best and continue to do my best to be part of it. Everyone should be required to assimilate ... I did and it suits me well. -- John, US

A country has a right to be free from foreign criminals to protect its citizens. I applaud Switzerland's stand to protect its citizens. It is not discriminatory at all. There are consequences for committing crimes and you should not have to pay for courts, jail housing and rehabilitation for people who do not respect your laws. I only wish that the US would do more to protect its citizens by not harboring criminals and illegal immigrants. The US government does not want to offend at the expense of citizens' safety and has an ulterior motive in allowing illegals into this country, many of whom are criminals. Our jails are overrun and the taxpayers are tired of taking care of them. -- Kristine, US

Hooray for the Swiss! Other European countries as well as the US should be adopting such laws. It's about time people wake up! -- Steve, Spain

Human rights groups have a problem with countries dealing with a serious criminal element in their society. Why? These criminals come into their country from another country and have no respect for the laws and customs of their newfound country. We are not talking about minor criminal offenses but major crimes such as murder and rape. Don't surrender your country like much of America has. -- Bill, US

I agree with the Swiss proposal. The rationale behind the human rights criticism that this is unfair should be applied equally to the crimes the perpetrators committed against a civil population. We have a worse situation having inherited the refugees from England and other Commonwealth nations that flock to Canada and cannot behave as reasonable citizens. They become a problem and the honest taxpayers have to pay for their comfort. Send them back to the uncomfortable place they came from as a result of their crimes in the country that gave them an honest opportunity. -- Sanford, Canada

I support the Swiss deportation plan. It's just common sense. If you don't obey our laws and hurt other people, you can't stay in our land. Simple. I'd like to know what "human rights" group is opposed to this new plan? Murder, rape or trafficking in drugs and people are crimes against human rights and no one should be protecting these criminals. As for the poster of the black sheep. Oh please! It has nothing to do with race. Haven't you heard of the phrase "the black sheep of the family?" It means the one in the family that is naughty and breaks the rules. -- B., US

If a guest enters your home and violates your rules or insults your family, that guest loses all rights of hospitality. So too, should non-citizens who violate the rules and laws of a state be subject to the same justice. America needs to rethink its very liberal generosity to criminals just as the Swiss do. Thank God someone in the world still has common sense! -- Rowdy, US

Congratulations to the sensible Swiss people. Criminals are always discriminated against ... their crimes invite discrimination. It is plain silly to simply ignore the crime committed. Far too many people live in a dream world where 'discrimination' is the only real crime ... this is total foolishness. Persons convicted of serious crimes like murder, rape, drug and people trafficking should be deported to their homelands after release from jail. The crimes they have committed are extremely serious and cancel their residency in Switzerland. Swiss voters must start leading the other European voters to return to sensible policies which promote high quality work and peaceful living. Groups and individuals who do not want this lifestyle should be sent back whence they came. God bless Switzerland and her sensible people. -- Michael, Australia

In this case discrimination, as applied to those who commit criminal actions, is intrinsic to judicial processes in civilized countries. Exporting a non-citizen resident who is found guilty (discriminating again) of such felonies as listed in the article is certainly congruent with judicial acts intended to protect the country's citizens. -- Dan, US

Switzerland has approved a plan to automatically deport foreigners convicted of serious crimes. The proposal, put forth by the nationalist Swiss People’s Party, has been criticized by human rights groups. (28.11.2010)