As the need for critical raw materials like lithium and silicon skyrockets, recycling could reduce the need for new mines. But scientists are also exploring substitutes. One resembles a messy sauce. 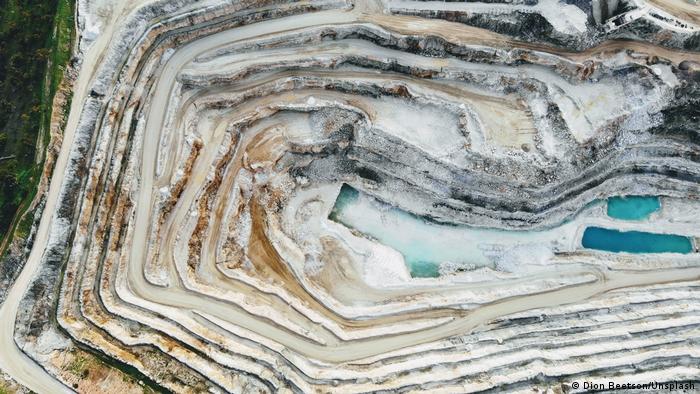 Mines like this one in Australia's Barossa Valley churn up entire landscapes.

In centuries past, countries at loggerheads might have turned to armoured vehicles and machine guns, nuclear warheads and aircraft carriers to show their might and secure their interests. These days, however, states are more likely than ever to use economic sanctions as weapons to push through their political agendas.

Rather than tanks and torpedoes, tariffs and trade restrictions seem to be the weapons of our time.

Particularly important in this landscape are critical raw materials, a group of 30 resources — mostly metals — held up by the EU as irreplaceable for developed industrial economies.

As demand rises, these materials increase in value, exposing the vulnerabilities of industries that depend on their accessibility. According to a European Commission study, aerospace, defense, electronics, automotive and energy-intensive industries all need access to at least 21 of the 30 listed materials.

The renewables sector needs slightly fewer, but is also entirely dependent on imports. Without them, the manufacture of photovoltaic, wind energy and electric vehicles which rely on lithium-ion batteries becomes impossible. So too, 3D printing, drones, robotics and other digital technology.

Of the 30 critical raw materials, bauxite, silicon metals, borate and cobalt are regarded as most critical for technology. 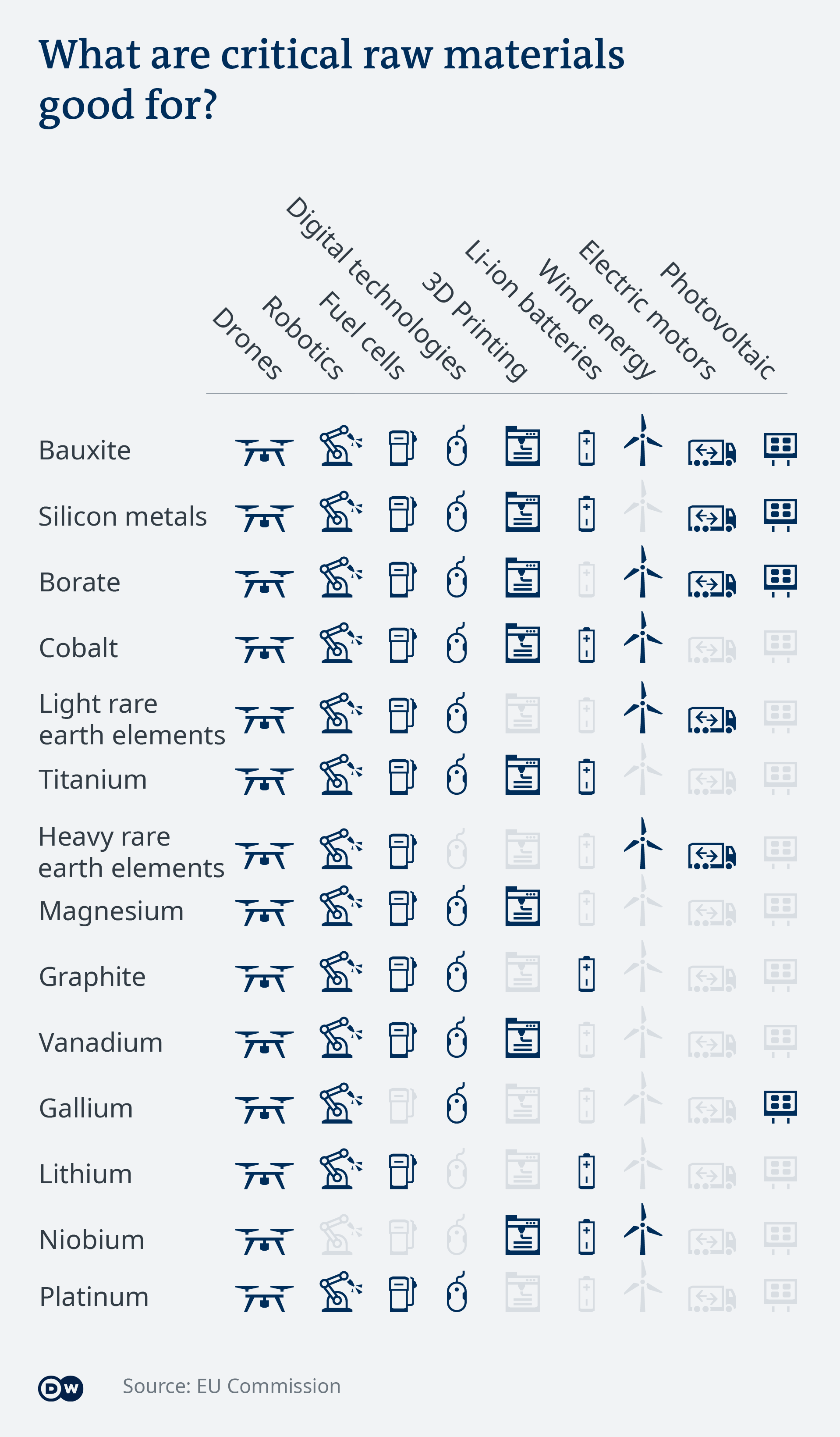 "Future demand depends greatly on how technological developments evolve," said Hanns Günther Hilpert, Head of the Asia Research Division of the German think tank SWP. "Industry will probably find ways to substitute some of them, or they will develop alternative technological solutions."

Batteries for electric vehicles, for example, could continue to increase demand for Chilean lithium, yet equally, that technology could be overtaken by hydrogen propulsion which requires few critical metal materials.

As a group, however, Hilpert says these raw materials will likely remain important — just as bulk commodities such as iron ore, copper, nickel and aluminum were in the past. "In future, conflicts will be about critical raw materials", he said.

Industrialized countries including the US and European Union member states have tried to predict their future needs. The study by the European Commission calculates a maximum 44-fold rise in lithium demand for use in electric vehicles by 2050. Graphite and cobalt usage, however, might be just eleven times greater than current levels. 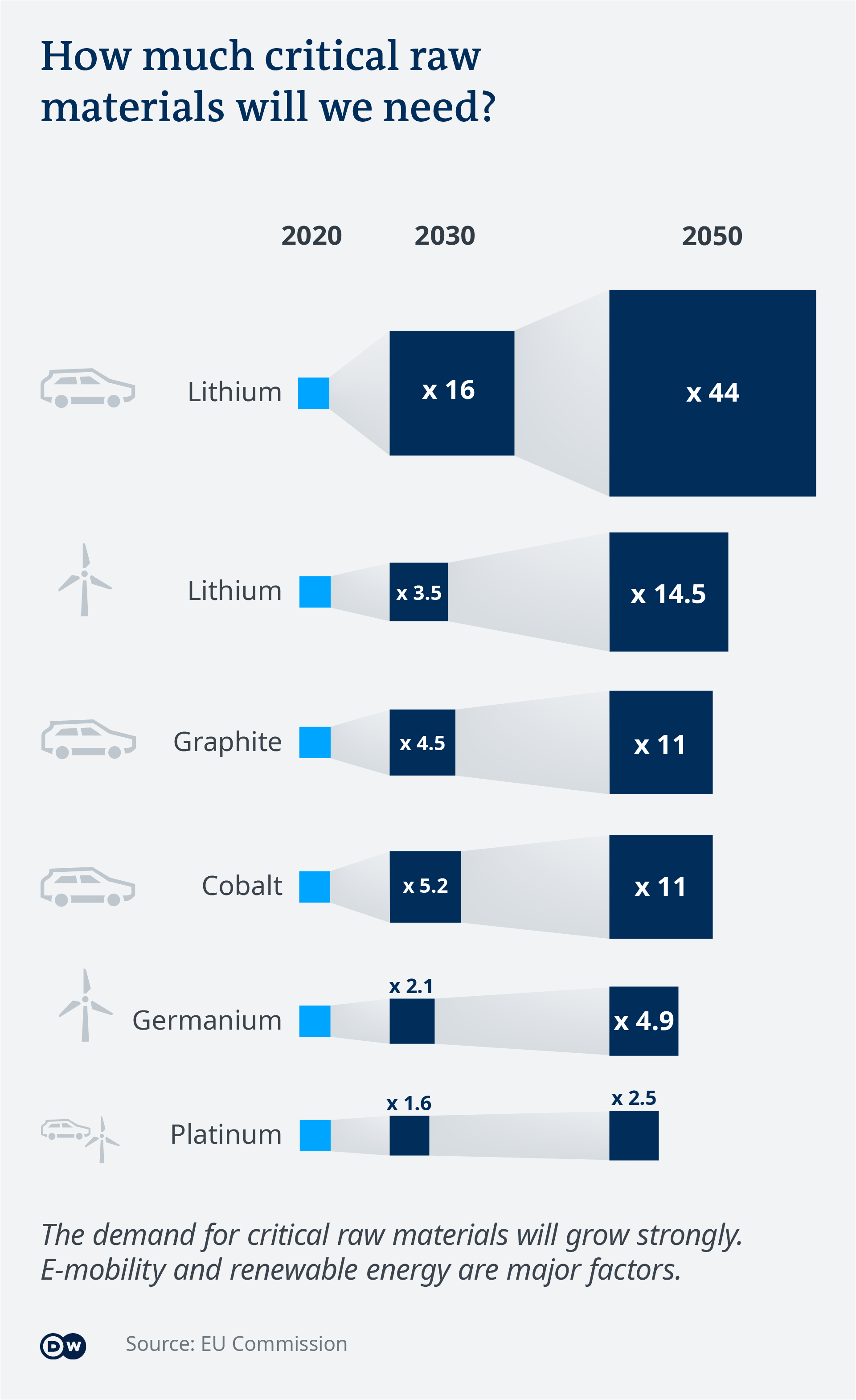 Tapping new deposits would be the easiest way to meet growing demand, and for some of the 30 critical raw materials, unmined reserves have been identified. Rare earths deposits in Brazil and Vietnam for example, cobalt in Cuba and Russia, and titanium in Brazil and Kenya.

Another option is recycling — in theory, at least. Yet as things stand, the process is generally complicated and expensive, and because companies manufacturing laptops, mobile phones and wind turbines don't publish the components they build into their products, they alone would be in a position to recycle them. 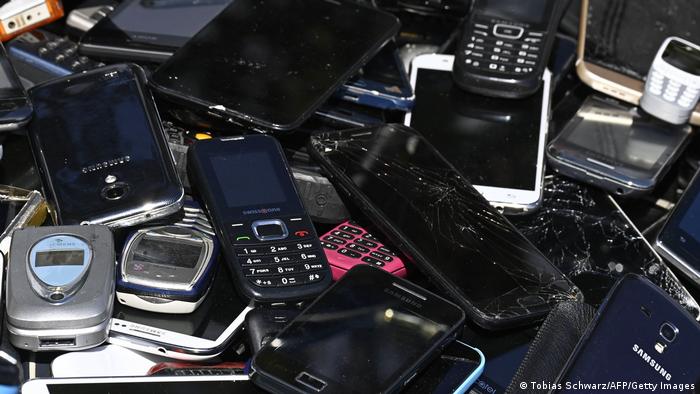 Melanie Müller, raw materials expert at SWP, who is researching resource governance, with a particular focus on Sub-Saharan African states, is critical of the lack of legislation forcing companies to be accountable for what they produce.

"Our cities are full of raw materials that are simply lying around, not being used. There is a lot of room for improvement."

Yet, while some metals, such as tungsten or cobalt could be recycled in noteworthy amounts, that doesn't apply across the list. 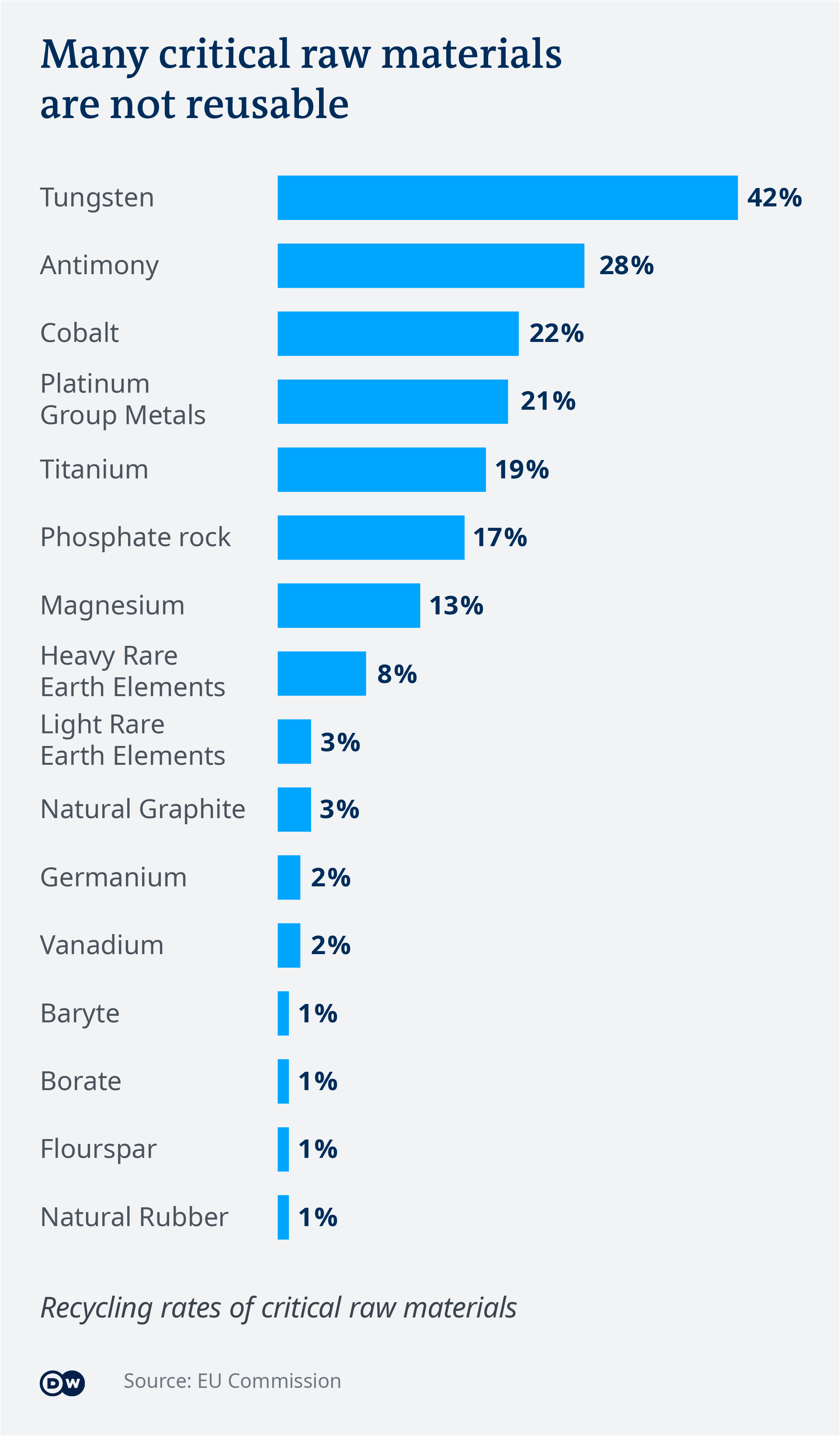 Another European Commission study found that raw materials like gallium and indium can't be recycled at all. In those cases, the only other option is substitution.

"A lot of research is being done in the area of substitution", Müller said. "For some critical raw materials, this is possible, but for others, it is not."

Perovskite to the rescue: New research on silicium substitution

One researcher working on substitues is Stefan Weber, a German physicist specializing in polymer research. He is part of an international team at the Max Planck Society research institute looking for a way to replace silicon in solar panels.

"Silicon is actually not an ideal material for photovoltaic because it is a lousy absorber,” he said. "To absorb light, you need a relatively large amount of silicon.”

"You mix it like a sauce and smear it over a surface until it crystallizes and forms the perovskite material", he said, adding that the "crystal is very messy."

In its current form perovskite isn't energy-efficient enough to be economically feasible, but the team is trying to tweak the nanostructure production without having to compromise on energy efficiency. Piggybacked on a silicon cell for example, energy efficiency increases by around 50 percent compared to conventional solar panels. 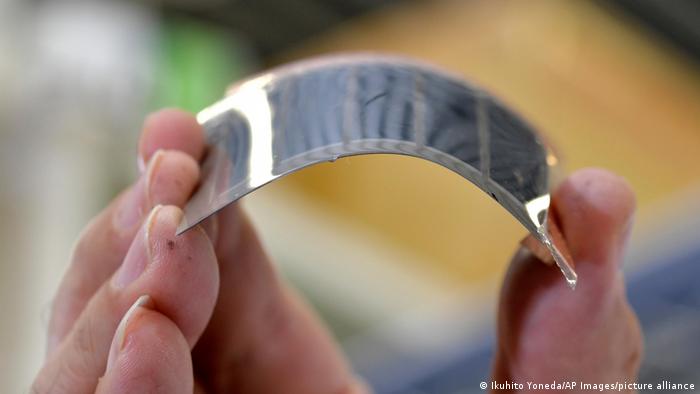 A perovskite solar cell is a so-called thin-film technology which requires less critical raw materials and more common materials. But durability is still an issue.

Relying on perovskite alone holds promise: Conventional solar panels include a silicon layer of 100 to 200 micrometers, about as thick as a hair. According to Weber, thin-film solar cells would only need half to one micrometer of perovskite — just one percent of the amount of material currently used.

But there are some problems: Perovskite cells are considerably less durable than their regular counterparts. While existing models last around thirty years, perovskite cells only have a two-year lifespan. In addition, they contain lead, a heavy metal that is toxic for the human body.

"The legal requirements are very strict, and they are strict for a good reason", Weber said.

Though he anticipates that the first modules could become available in three to five years, he says it will take at least another decade before perovskite technology becomes established. "There is still too much we don't know."

This article is part 2 of a series. Read more
Part 1: How China's mines rule the market of critical raw materials
Part 3: Toxic and radioactive: The damage from mining rare elements

Data, code and methodology behind this analysis