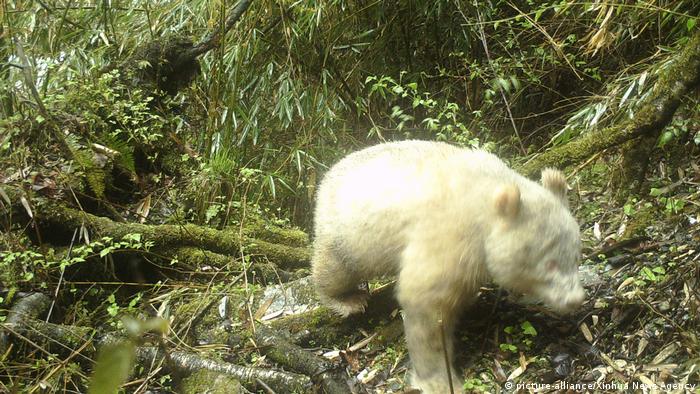 A unique, completely white giant panda has been discovered in the woods of southwestern China, according to footage published by state media.

The animal was caught on camera wandering through Wolong National Nature Reserve in Sichuan province in mid-April.

The panda must be between 1 and 2 years old, bear specialist Li Sheng of Peking University told Xinhua news agency.

About 80 percent of wild giant pandas live in Sichuan province. The rest are in Gansu and Shaanxi.

Since reaching a historically low population of less than 1,000 pandas in the wild in the early 1980s, China has taken several measures to protect the country's most beloved animal.

Today, there are over 1,800 pandas in the wild and 548 in captivity. The animal's notoriously low-energy diet and difficulty breeding have been just some of the obstacles conservationist have overcome in taking giant pandas from the endangered to "vulnerable" list.

In 2018, Beijing announced a massive 10 billion yuan ($1.45 billion) investment in the Giant Panda National Park. The park, meant to link up existing wild populations to promote breeding, will be 27,100 square kilometers (10,500 square miles) when completed.

To the delight of photographers and visitors alike, a fluffy, four-month-old panda cub greeted the public for the first time at a Malaysian zoo. Her birth was a rare win in the tricky realm of natural panda reproduction. (26.05.2018)